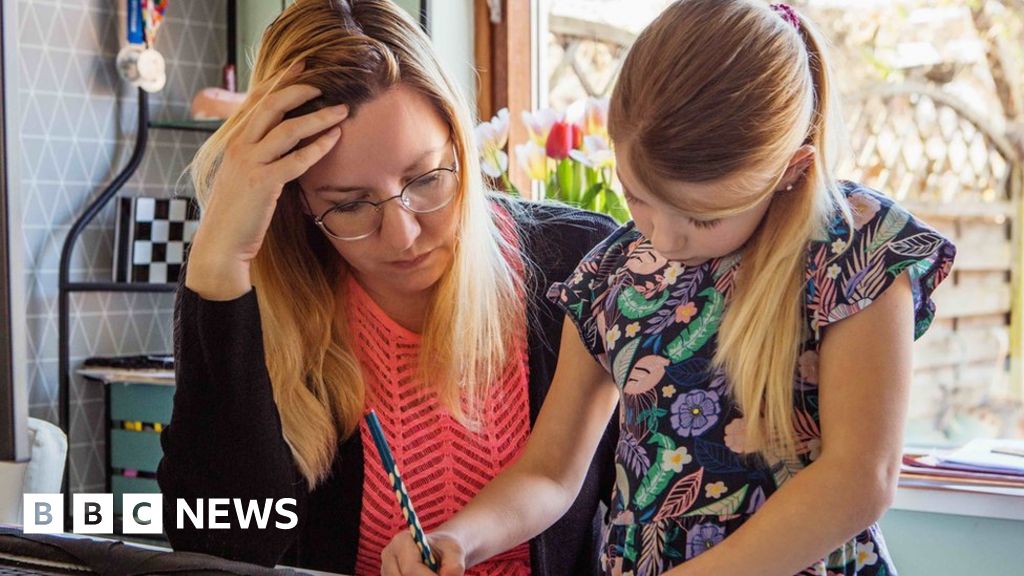 BBC News
'Knackered and confused.' That's just the parents.
By Sean Coughlan
BBC News family and education correspondent
Published
image copyrightLorado
image captionParents are struggling with the sense of uncertainty, says psychologist
Home schooling can be tough. It's difficult to concentrate, there's emotional exhaustion, boredom, a lack of motivation and it's really hard not going out to see friends. And that's just the parents.
This winter lockdown is taking its toll on families, now struggling even more on the black ice of uncertainty as no-one can say when schools in England are going to reopen for most pupils again.
"There's a sense of fatigue," says Jacqueline Smallwood, who is at home with three secondary-school children. She says her own "concentration levels have fallen dramatically".
"It's so repetitive that it just makes you feel tired," she says of the latest lockdown and the "silent struggle" facing both parents and their children to try to get motivated.
image copyrightPA Media
image captionHome school shows no sign of coming to an early end
There might have been some guilty enjoyment at the start of the year when the school term was initially delayed, not having to get up and out on cold January mornings.
Until it dawned on them that this was becoming something much longer than a few weeks.
It's morphed from early January to half term in mid-February and now maybe Easter in early April or even later. And Jacqueline says, as a matter of "respect", parents need to know what's happening about schools.
The confusion over a return date seems to have further frayed the nerves of parents.
'Stuck at home'
The mother, who lives outside Canterbury in Kent, says she worries about the pressures building up on young people.
For teenagers like her sons, she says this "should be a pivotal time in their lives," when they're beginning to get some independence and when social lives are hugely important - but instead they're stuck inside with their parents.
"We can't live like the Waltons forever," she says, referencing the US TV series of a folksy family relying on each other.
image captionJacqueline says families are finding this latest lockdown tougher than the spring or summer
The first lockdown created an unexpected sense of togetherness, an "enforced bonding" that she says turned out to be a "massive positive".
But Jacqueline, who works as a writer, sees no such upside to the latest lockdown. There is a collective frustration - and she says it has been made even worse by the confusion about when schools will go back.
The online homes chooling seems to be working, she says, with teachers trying to boost the enthusiasm levels, but it's no real substitute for being in school. And she wants much more clarity about when they will go back.
'Uncertainty'
"I've tried not to be political about decisions being made, but you can't help but feel disappointed. They don't seem to understand how real people are living," she says.
She says when politicians say maybe schools will or won't be back by Easter, they don't realise how much that uncertainty affects families trying to plan for what comes next.
Educational psychologist Dan O'Hare says the "key word is 'uncertainty'".
image copyrightPeopleImages
image captionLiving on a laptop can take its toll on parents having to work and home school their children
Not knowing what is coming next adds to the pressure, he says, and children out of school are already facing big unknowns such as what's going to happen about exams or when will they see their friends and teachers.
"It's really stressful for children and their families," says Dr O'Hare, who is co-chair of the British Psychological Society's division for educational and child psychology. "They need a sense of a plan."
Missing friends
This lockdown is also in the depths of winter - and he says employers need to think about making sure staff working from home are able to take a break in daylight hours, so that families can get outside.
It's no use asking parents to answer work emails all day and expect them to go out when it's dark.
image copyrightPA Media