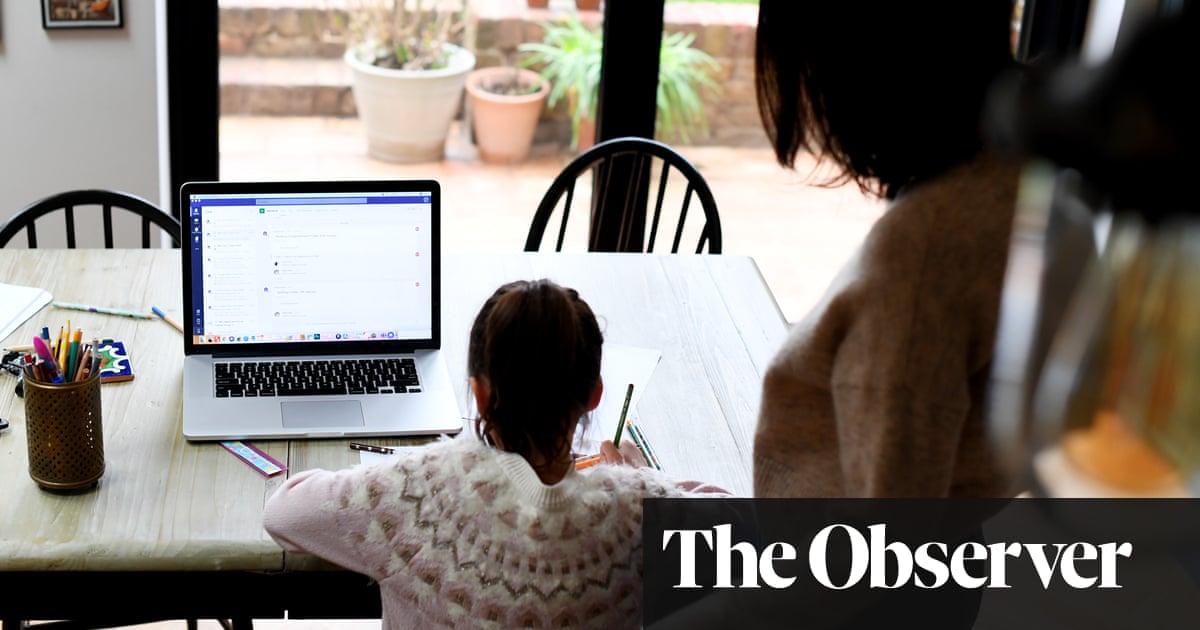 Teachers are expecting parents to do more home schooling with their primary-age children this lockdown, compared with the first one, leaving parents feeling stressed and anxious about their children’s mental health.

Nearly half of parents say primary school teachers are expecting more of their child this time round, according to research for the Observer by the Parent Ping survey app.

More than a third of parents also say primary schools are expecting them to do more work with their children than they did in the first lockdown, and nearly half say lessons are more structured, with set times for learning specific subjects or participating in live classes.

The news comes as teachers call on the government to reassure parents – particularly those who are working and trying to home school – that it has “a very ambitious plan” to help pupils catch up when they eventually return to the classroom.

“It would be helpful if the government could reassure parents that they just need to do the best that they can,” said Rosamund McNeil, assistant general secretary of the National Education Union (NEU). “I think parents need to hear that.”

Two days after schools were told to close to the majority of pupils, Gavin Williamson told parents they could report schools to Ofsted if they were unhappy with their child’s remote learning provision, piling extra pressure on headteachers to follow the government guidance and set hours of online lessons and home schooling work each day, even for five-year-olds.

The Department for Education now expects primary schools to provide a minimum of three to four hours of remote education to pupils each day, and says that should include recorded teaching or live lessons, as well as tasks for children to complete independently.

However, engaging young children in so much online learning and independent work at home often requires hours of supervision and even teaching from parents, who may simultaneously be working full-time.

About 40% of parents of primary school pupils told Parent Ping they are feeling even more stressed about home schooling than they did during the first lockdown – when parents of children aged 10 and under already reported particularly high levels of stress.

Three out of 10 parents of primary school children say they are also feeling more anxious, 14% are crying more often, 18% are having more sleepless nights, 10% are arguing with their partner more and a quarter are being less patient with their children. Just 28% of parents reported they were having none of these problems.

“Parents aren’t – and don’t have to be – teachers,” said McNeil. “They don’t have to achieve everything a teacher would. They should do what they can to try to help their child access the learning schools have set, but they have to be realistic.”

Otherwise, she warns, that can create tension in the home that is counterproductive for learning. “If this does go on until Easter, it’s got to feel sustainable, like something normal human parents can do.”

Instead, she said, teachers are hearing from parents that the amount of work being set in some schools is “too much for a five- or seven-year-old to get through and stay on board with”.

Another worrying survey by online wellbeing hub Teen Tips shows 87% of parents think the recent school closures have had a negative impact on their child’s mental health, and 58% are concerned about their child’s self-esteem.

Instead of putting lots of pressure on parents and children now, the NEU says the solution is to fund schools to hire extra qualified teachers when pupils who have been learning remotely return to the classroom. “We’re going to need smaller class sizes and extra teachers to work with students to assess the impact of the disruption on individuals, and offer tailored support.”

When Louise Banks is in a work meeting these days, she often hears the sound of a chair being dragged across the kitchen floor. Her daughters, Violet, seven, and Ivy, four, have learned that it is the best time to get the chocolate spread from the cupboard. “I get off my call and they’re sitting there with a jar of Nutella and breadsticks.”

She and her husband, Phil, both work full-time, five days a week, in senior management positions – and are finding home schooling two children much tougher this lockdown. “I’m 100% more stressed. There’s definitely more work set by the school, and it seems to involve more prep – it’s more labour intensive.”

Her employer, she says, is really understanding and is allowing her to work flexibly. “But my job hasn’t changed and the expectations on me to perform and manage my team haven’t either. Phil and I are sharing the home schooling equally, so sometimes we both end up working till 11pm or midnight, and often we don’t sleep properly because we feel so stressed about trying to fit it all in.”

She is conscious that her children’s education is now firmly in her and Phil’s hands. “I don’t want to screw it up. But I can’t give them the time they need during the day. They will come to me, when I’m in the middle of a conference call, going, ‘How do you draw a square-based prism?’ And I know I’ll have to sit and physically do it with them, on top of my day job, and parenting and feeding them.”

Sometimes, in desperation, she sets her dining-room table with paint, glue and other craft stuff and leaves them to it. “I’ve learned to accept the house is not going to look the same ever again when I come off my call.”

Meanwhile, her stress and anxiety levels are “off the scale”. “I go through constant cycles of guilt that I’m not being a good enough mum, I’m not a good enough teacher, and I’m not doing my job well either. I feel like I’m failing miserably at everything. And there’s no end in sight.”