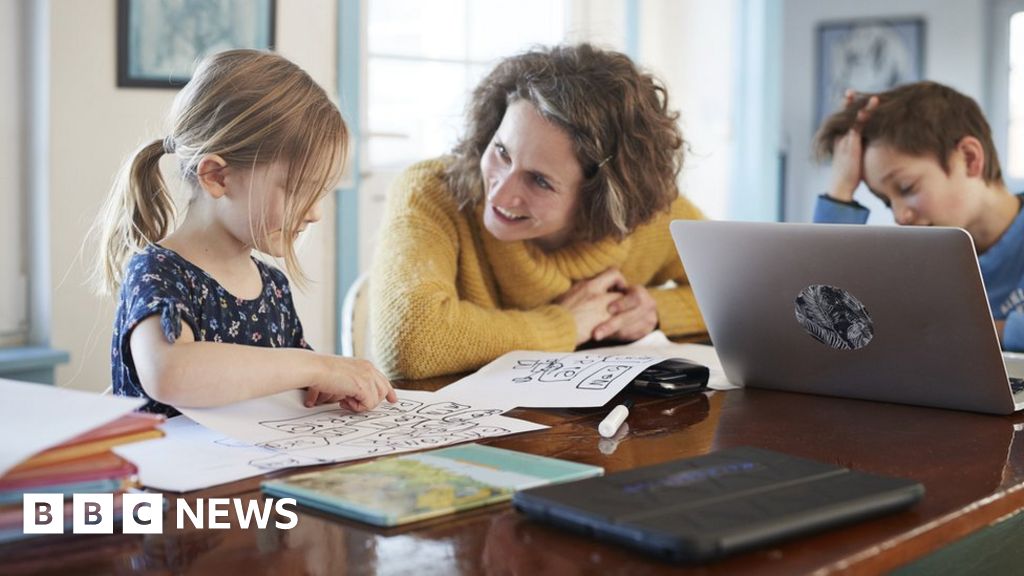 BBC News
Parents' stress and depression 'rise during lockdowns'
By Katherine Sellgren
image copyrightGetty Images
image captionNot all parents have found it easy to home school their children during coronavirus lockdowns
Levels of stress, depression and anxiety among parents and carers have increased with the pressures of the lockdowns, suggests research from the University of Oxford.
Issues include difficulty relaxing, feeling hopeless and being irritable.
Many parents, especially those of secondary-age pupils, say they are worried about their children's futures.
The government has said it is aware how challenging it is for parents to support children with home learning.
'Fearful and worried'
The
research , based on responses from 6,246 parents and carers between mid-March and the end of December 2020, found problems including:
difficulty relaxing
being easily upset or agitated
feeling hopeless
feeling fearful and worried
being more irritable, over-reactive and impatient
On an established scale of depression, anxiety and stress, parents' depression scores increased from April through to June from an average of 9.03 to 9.71, says the study funded by the Economic and Social Research Council.
While these average scores decreased over the summer, when Covid-19 restrictions were eased, to a low of 8.23 in September, they rose again over the course of the autumn term to a high of 10.1 points in December.
Parents' stress scores were at their lowest in August and September at 11.4 points, but increased to a high of 13.2 in December, following the pre-Christmas lockdown.
Children 'traumatised' by coronavirus pandemic
The researchers said higher levels of stress were detected particularly in low-income families, as well as single-parent households and those with children with special educational needs.
While average anxiety scores were relatively stable throughout the whole period - ranging from a 4.71 points in April to 4.24 in July - they hit a high of 5 points in December.
The study also found just over a third (36%) of parents with young children (10 years or younger) said they were "substantially worried" about their children's behaviour, in contrast to just over a quarter (28%) of parents who had older children only (11 years or older).
However, nearly half (45%) of those with secondary-age children were worried about their children's education and future, compared to 32% of those with young children.
'Frequent arguments'
Leticea, a parent who took part in the study, said: "I think that UK leaders should have access to this data to see what is going on with the mental health of families and how they are being affected by Covid-19 with increased levels of stress, depression and anxiety - we need something to look forward to.
"I am also worried that the next three months will show a sharper increase in anxiety and stress where parents are having to do more teaching at home.
"Children are more worried as their teachers are becoming ill - the 'new variant' sounds more scary, my daughter keeps commenting on an increasing worry of catching Covid-19 which she didn't do so much before."
Another parent, Madiha, said: ''Current times are hard enough as they are.
"As a working parent, the most important thing for me is to ensure my family's wellbeing, their safety, and their continued development.
"Prolonged screen time, disruption to daily routine, frequent arguments, lack of exercise, and stress of exams have all been contributing factors to our mental health and wellbeing.
Madiha said she hoped the study would play a part in informing policy and developing interventions to help families.
'Particularly vulnerable'
Cathy Creswell, professor of clinical developmental psychology at Oxford University and co-leader of the study, said the findings showed parents were particularly vulnerable to distress during the first lockdown.
"Our data highlight the particular strains felt by parents during lockdown when many feel that they have been spread too thin by the demands of meeting their children's needs during the pandemic, along with home-schooling and work commitments."
image copyrightPA Media
image captionSchools were first closed to most pupils in March
John Jolly, head of the charity Parentkind, said the research highlighted "the additional stress and pressure that partial school closures place on parents".
"Given the disruption to family life, it is vital that policymakers consult and listen to the concerns of parents on issues that directly impact them and their children's futures.
"This includes the safety and reopening of schools, the fair allocation of grades in the absence of exams, and remote learning provision."
The Oxford researchers are tracking children's and parents' mental health throughout the current crisis, to help them identify what protects young people from deteriorating mental health and how this may vary according to child and family characteristics.
Related Topics
It accuses richer nations of a "me-first" approach to Covid vaccine, and hoarding precious supplies.
Published