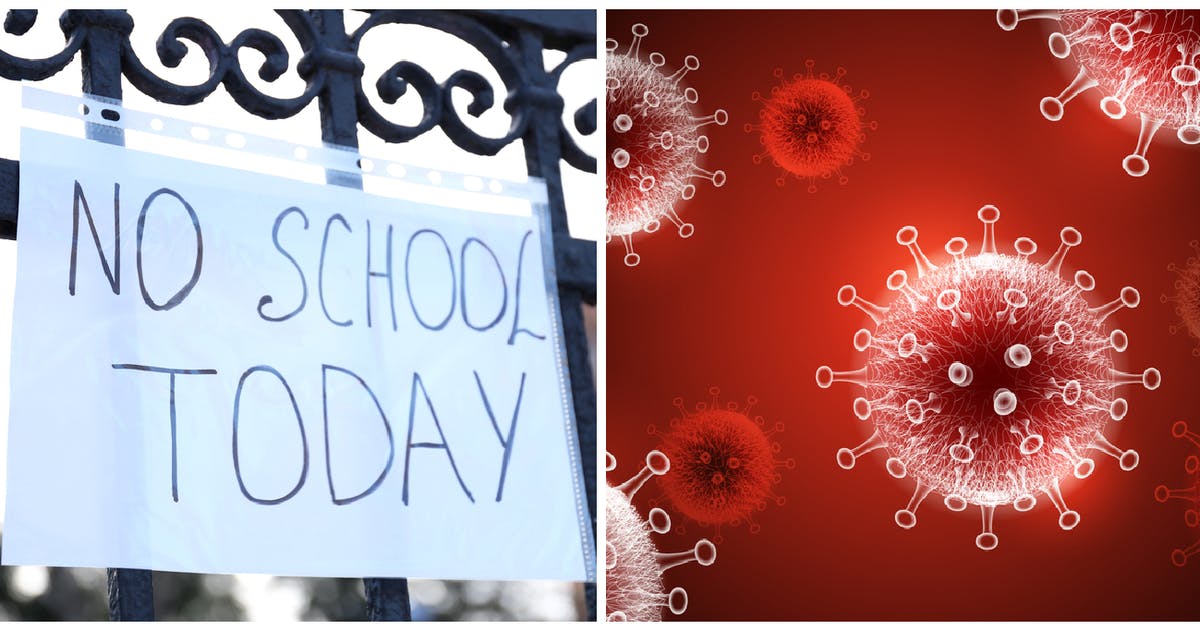 In response to the rapidly rising COVID rates, the government has announced schools won't be going back as normal next week – with closures for all secondary schools and some primary schools in the worst affected areas.

Just a few weeks ago education secretary Gavin Williamson was threatening legal action against Greenwich council, which had announced it was planning to close some schools early for the Christmas holidays in light of rapidly rising COVID cases.

But a few weeks is a long time in the middle of a pandemic and yesterday the government announced revised plans for the new school term, due to begin next Monday.

The plans include school closures – until 18 January – for ALL secondary schools and for primaries in areas with a particularly high rate of coronavirus infection.

Gavin Williamson appeared on BBC Breakfast today saying he hoped the closures would be 'as short as possible'.

'We are having to take these steps on public health advice. I would hope that any closures will be short.'

The revised plan for the new term is:

The vast majority of primary schools will open as normal from 4 January, but some in Tier 4 will remain closed until 18 January to all pupils aside from vulnerable children and the children of key workers.

It is not completely clear but we THINK that the affected schools will be offering remote lessons, but exactly what shape these will take remains to be seen.

The government has said that 'where face-to-face education is disrupted, DfE is providing laptops and tablets to schools for some disadvantaged children' but obviously there are still massive barriers for many families when it comes to remote learning.

Schools in these areas will be closed:

All secondary schools will remain close until 11 January – again, aside from for vulnerable children and the children of key workers – when children in exam years will return to the classroom.

The remaining school years will return from 18 January.

It is thought that secondary schools will be gearing up for mass testing of students while they remain closed to pupils.

The remote learning situation is also confusing for secondary schools, with the Department for Education saying that schools should 'prioritise resources for remote education for exam year groups ... and to other all years as resources permit'.

The DfE press office has now confirmed this later position, saying in the first week secondaries "should provide some remote learning where possible for the other year groups".

Paul Whiteman, the general secretary of the National Association of Head Teachers, said that the decision is a 'last-minute mess' that could have been avoided had the government listened to schools ahead of the Christmas break.

'Back then, schools that wanted to shift to remote learning were threatened with legal action. Now we have a situation where the government is instructing schools to reduce the amount of teaching time available.

'If we’d had the freedom to take action before the holidays, we might have been in a position to have more schools open for more pupils. School leaders will be baffled, frustrated and justifiably angry tonight.'

Geoff Barton, General Secretary of the Association of School and College Leaders, has said that the decision 'seems sensible in these extreme circumstances'.

'Nobody wants to see children out of school but the difficult balancing act between keeping education fully open and suppressing transmission of the virus has clearly swung in the direction of tackling the immediate public health crisis.

'However, we are concerned that the government is assuming that it will be business as normal for the majority of primary schools from the start of term.

'The government needs to urgently explain why it considers the full resumption of primary education to be safe in most areas despite alarming infection rates.'

Parents have also been expressing their frustration at the news, particularly those who will now have primary school children at home with hardly any notice or time to make contingency plans for their own work commitments.

Meanwhile, parents whose schools remain open are worried and questioning if it is really safe to send their kids back.

It is safe to say confusion reigns!

'So please explain to my children why one needs to stay home until school do testing and the other two can just go in without testing and spread back to all of us anyway. This is absolutely bonkers' @JudeandOllie

'Norfolk like most of East of England has been in tier 4 since Boxing Day. Yet Norfolk & Suffolk schools are not on the list. Why do they think these areas are safe for children & teachers to mix in schools but are not safe enough to shop in M&S?' @HelenStarling9

'Only in the UK will we close schools because of one centimetre of snow, but keep them open during a pandemic! #lockdownuk' @TomEason1983

Collins have a great range of homeschooling books to help your kids learn at home. From spelling workbooks to maths guides, you can browse the whole range here at Amazon. Prices start at just over £2.

How do you feel about the news? Do you think all schools should close? Let us know on the chat thread below...

Coronavirus: what parents need to know

CHAT: is it right to close schools?