'Our kids are the sacrifices': Parents push schools to open 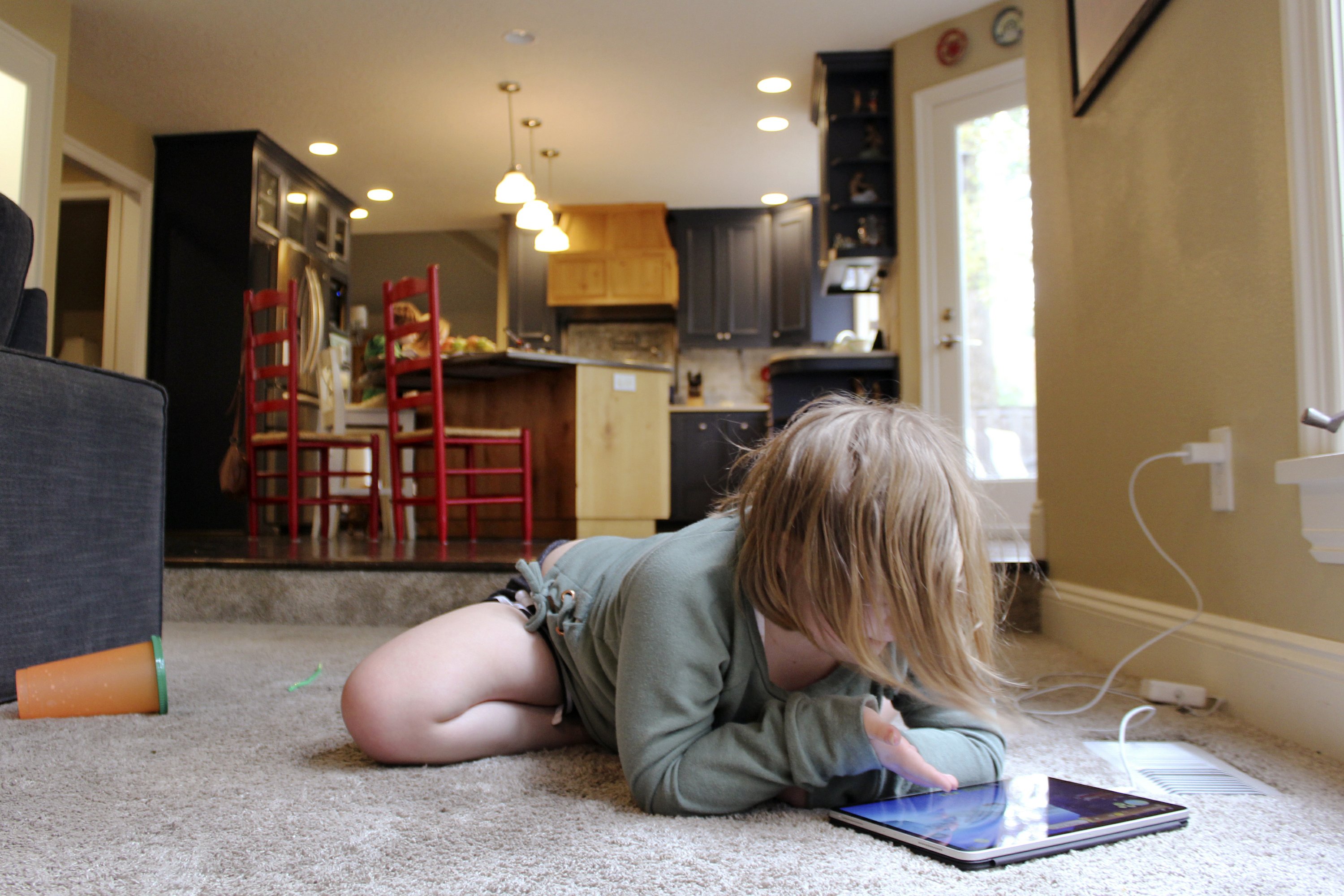 Lizzie Dale sprawls on the floor to play games on an iPad as her siblings work on school work in the kitchen behind her in their home in Lake Oswego, Ore., Oct. 30, 2020. In Oregon, one of only a handful of states that has required a partial or statewide closure of schools in the midst of the COVID-19 pandemic, parents in favor of their children returning to in-person learning have voiced their concerns and grievances using social media, petitions, letters to state officials, emotional testimonies at virtual school board meetings and on the steps of the state's Capitol. (AP Photo/Sara Cline)

Lizzie Dale sprawls on the floor to play games on an iPad as her siblings work on school work in the kitchen behind her in their home in Lake Oswego, Ore., Oct. 30, 2020. In Oregon, one of only a handful of states that has required a partial or statewide closure of schools in the midst of the COVID-19 pandemic, parents in favor of their children returning to in-person learning have voiced their concerns and grievances using social media, petitions, letters to state officials, emotional testimonies at virtual school board meetings and on the steps of the state's Capitol. (AP Photo/Sara Cline)

LAKE OSWEGO, Ore. (AP) — The activism of Jennifer Dale began when she watched her third grade daughter struggle with distance learning, kicking and screaming through her online classes.

The mother of three initially sent emails to her local school officials with videos of the disastrous school days for her middle daughter, Lizzie, who has Down syndrome. Over time, she connected with other parents and joined several protests calling for school buildings to reopen.

Now she helps organize events and has become a voice for what has become a statewide movement of parents calling for children to return to school in Oregon, one of only a handful of states that has required at least a partial closure of schools as long as local coronavirus infections remain above certain levels.

“This just isn’t plausible anymore. It’s not fair to the kids, who I am afraid aren’t getting an adequate education,” Dale said during an interview at her home in Lake Oswego as she juggled her work and helping her children who are distance learning. “Something needs to change. It is not working, and our kids are the sacrifices.”

As the surge in coronavirus cases brings a new round of school closings, lawsuits by parents have followed in states including New York, California and Pennsylvania, arguing that remote learning is falling short of state education standards and causing harm to students.

In many communities, parents have turned out at demonstrations for school reopenings, often greeted by groups of other protesters including teachers and their union supporters asking for improved safety measures before students return.

The movement has gained substantial traction in Oregon, where parents have organized protests across the state, including one at the state Capitol in October that drew hundreds of parents. They have submitted petitions with thousands of signatures, posted anecdotes on social media and written to state officials.

A coalition of parent groups in the state is demanding that Oregon officials remove statewide barriers to in-person learning by Jan. 6 — the 300th day since the vast majority of students were last in a classroom.

Based on data from the state’s education department, around 9% of Oregon public school students have returned for in-person school or a hybrid schedule, a result largely of stringent metrics set by Gov. Kate Brown, a Democrat, for school reopening.

Initially, schools weren’t eligible to reopen their buildings, with some exceptions, unless the state’s positivity rate remained for three consecutive weeks below 5% — a number the state has not met since early July.

New reopening metrics were announced in October, allowing counties to transition toward in-person learning once they have fewer than 200 new infections per 100,000 residents. But still, state officials said only about 20% of Oregon students would be eligible for in-person learning.

Similarly in New York City, Mayor Bill de Blasio set one of the strictest metrics in the country — schools would close citywide if the city reached a 3% positivity rate. But, as businesses in the city reopened, parents argued that the metric should be revisited and that students should begin returning to the classroom.

On Sunday, de Blasio abandoned the 3% threshold, announcing that students Pre-K through elementary school, who have opted for in-person learning, will return to school buildings on Dec. 7.

Dale’s daughter Lizzie was allowed to begin attending a portion of her classes at her school in Oregon in October, as part of an arrangement for special education students. She wears a face shield and as the only student in the classroom, she does not get to see any friends, but she prefers it to “computer school.” Dale’s other children are continuing with distance learning.

Severe illness from the virus among children and teens is rare, particularly in younger ones, but they can often spread the disease without showing any symptoms. School administrators say they see little evidence of virus spread inside schools.

While officials universally stress the importance of in-person education, states have taken different approaches on risk tolerance with the virus.

Sates including California, Hawaii, New Mexico and North Carolina also require school districts to meet similar metrics in order to reopen for hybrid or in-person learning. On the other end of the spectrum, governors in states including Arkansas, Florida, Iowa and Texas have ordered that schools make in-person learning available.

During a recent day at Dale’s home, she juggled her children’s schoolwork with her own work and preparing meals. As the school day ended, Lizzie watched TV, her son Charlie played with his toys and her daughter Maddi facetimed a friend. For the first time in the day, she sat in her home office and focused on her job.

She looked over the most recent COVID-19 cases. They were continuing to rise.

“At this point I am nervous they won’t return at all this school year,” Dale said. “It’s time to begin learning to live with COVID,” she said. “We have learned how to do this else where, like grocery stores and restaurants. We can’t hide forever.”

Cline is a corps member for the Associated Press/Report for America Statehouse News Initiative. Report for America is a nonprofit national service program that places journalists in local newsrooms to report on undercovered issues.