Meet Two Working Parents Honored for Parenting During the Pandemic 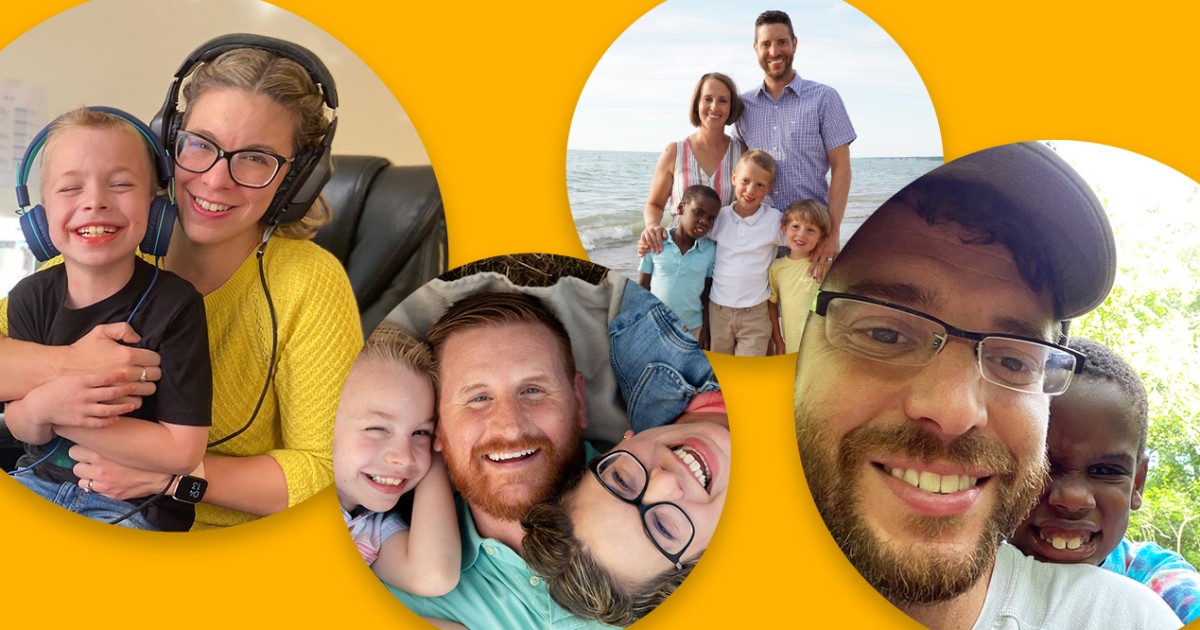 s any working parent will likely tell you, balancing a career with childcare isn't always easy—and it's only magnified during a pandemic.

Erica Voss, 38, Director, Observational Health Data Analytics, Johnson & Johnson, has been with the company for 16 years and manages a team of seven scientists working in the epidemiology department. In 2013, she and her husband, Chris, had a son, Zachary, and in 2015, she was diagnosed with B-cell lymphoma, a type of blood cancer.

Voss and Felder share how they've handled the ups and downs of managing career goals and raising kids—including the silver linings they've found as they've navigated their new normal.

Erica Voss: My cancer diagnosis in 2015 caught us off guard. I was in my early 30s at the time and my son, Zachary, was a toddler. During a visit with my in-laws in Florida, I just didn't feel well. I had pain in my chest and couldn't sleep. So I went to the emergency room, and after a chest scan, found out there was a large tumor behind my rib cage.

We flew home immediately, and I got the B-cell lymphoma diagnosis. Soon after, I started a dose-adjusted chemotherapy in which I would receive in-hospital chemo for five days straight, with a two-week break between sessions. There were a total of six sessions, with each increasing in intensity.

It was initially very scary. But once I figured out what was wrong and what my treatment path was going to be, I just got on the train and rode it out, and it became less scary.

Kevin Felder: Becoming foster parents is something that my wife, Lindsey, and I had always talked about doing, although we initially thought it was something we would venture into later in life. But at church one day in 2014, there was a discussion about under-served children and it hit us: Now is the right time.

Isaac, now 6, came to our house as a foster child, and three-and-a-half years later, we adopted him. Then, in January of this year, while I was on a work trip in California, we were notified that we'd be fostering two young children: Day'Mier and Terriyah.

So when I left the house to go on my business trip, I had three kids, and when I came home, I had five.

Felder: Day'Mier had some aggressive behavior: a lot of biting and hitting. It was a struggle, and it took a lot of engagement, time and oversight to help reverse the behavior. We also had a newborn and three other children, so it was exhausting.

Some nights I'd finish dinner, get half the dishes cleaned up, collapse on the couch and think: 'I'm going to bed.' We'd do the same thing, day after day, with no break. I laugh because I made it through engineering school without becoming addicted to coffee, but I couldn't make it through quarantine without it!

But by April, I remember telling Lindsey, 'I feel like Day'Mier is turning a corner.' I get chills just thinking about it. He had finally made good progress, and we felt like we were over the hump. His behavior had calmed down, and we'd read together and play silly games. He was my little buddy.

Just one week after that milestone, we had to unexpectedly say goodbye, when his godmother gained guardianship. It was incredibly painful.

Voss: When you have cancer, you don't know how many moments you have left. That's very intense. Just knowing that I had this little toddler and not knowing how much longer I'd have as his mother is terrifying.

But everybody rallied around me, and I was very blessed. For instance, Zachary's daycare asked if I was potty training him, and I was like, 'I can't.' And they said, 'Don't worry. We've got this.'

We never told Zachary the details about the cancer, beyond saying, 'Mommy's sick.' He never saw me in the hospital. Luckily, he doesn't remember anything from that time.

Voss: I was very stressed at the time I was diagnosed. I was trying to get my doctorate in biomedical informatics, while working full-time and parenting a toddler. I was in a state of panic constantly because the class I was taking was too hard and I was trying to muscle through it, sleeping just three hours a night.

This all taught me that you have to respect your body and take care of it. I have better tools now that help me do that.

If I feel anxious, I sit down in the morning and write down what I need to do for the day, and then I meditate for 15 minutes. It calms me, and I end up being more productive. I prioritize sleep now by going to bed at a decent hour. And I've gone to therapy.

After chemo, my brain was not the same for about a year, as the treatment can have cognitive side effects, like brain fog, and I was sad and scared that it wouldn't get better. Talking about it helped me process what was happening and cope.

Felder: I've learned that difficult situations can make you stronger. Bringing kids in and then having to say goodbye to them is a hard thing, and these are experiences that help our family build resilience.

Voss: If I ever feel myself getting agitated these days, I take a step back and ask myself: 'In the scheme of things, is this worth my energy?' Probably not. For example, if somebody cuts you off on the highway, it's not worth any energy to be upset about that. Who cares?

And saying no to things helps. Would I like to be part of Zachary's Parent Teacher Organization at school? Yes. Do I have time for that? No. So I remind myself there will be time later, when I'm not getting a Ph.D.

I also pick activities to focus on with Zachary because we don't have time for everything. So we're not doing sports now, but we are doing virtual piano lessons. I prioritize one thing that's important and I make sure that gets done. And I accept that that's enough.

Felder: It has been hard to manage all of it, especially in the beginning, when daycare and schools shut down with little notice. I'd be at the dining room table on my computer, and some of my kids would be on their devices right next to me since they're young and need assistance.

Lindsey works a lot with Europe, so she would take the morning shift and wake up early to make calls and handle emails, and I would work the later shift because I worked a lot with California. I declined all non-essential meetings. But we were eventually able to find help through a nanny and a generous neighbor.

Voss: I give teachers so much credit, but remote learning is very difficult. Zachary is in second grade, so he's still too young to do school on his own. Chris and I were helping him, but we eventually hired a nanny who is a student at a local community college. We feel so lucky that it's an option for us.

I don't want to say, 'Oh, we just get it all done ourselves' because that's not true. She actually moved in with us, along with her dog and her fish. And we had two dogs, two cats and two fish already, so it's a full house!

Voss: Johnson & Johnson is very flexible. Whenever Zachary was doing remote learning and needed me, I just had to say to my colleagues, 'Hey, from 8 A.M. to 10 A.M., I need to help Zachary.' And we adjusted our work schedules.

Felder: The arrival of Day'Mier and Terriyah was an example of how Johnson & Johnson was super supportive because, holy cow, I suddenly had two new kids, and we didn't have childcare lined up. I took the next two days off so we could figure it out.

Also, when we adopted Isaac, I took advantage of Johnson & Johnson's parental leave policy. I took off between Thanksgiving and New Year's that year and completely disconnected to focus on my family. That's a tremendous benefit.

There are young fathers on my team, and I'm always one to push them to use the policies that we have and create a culture that says: It's not only okay—it's encouraged.

Felder: I don't love the word 'balance.' To me, it implies that we're perfectly in a static condition. I feel like it's more about integration, where you just fit it all together. And as things change, it's dynamic and you change again.

One strategy Lindsey and I have developed is we do planning meetings on Sunday nights. We go through our calendars for the week together and figure out how we're going to juggle everything. I might say, 'I have a really critical meeting on this day. Can you cover for me?' or vice versa.

Voss: For me, it was about learning how to ask for help. It was Chris who ended up interviewing a bunch of people and finding a nanny for us.

I did not want help at first, and what I discovered was: I do need it. And life gets so much better if you give up owning it all. The fact that I had somebody to help with even just the dishes meant I got more time with my son, and then a lot of the stress started to go away. Before then, I would just kind of bulldoze through it and, you know, I wasn't happy. It's hard.

Felder: One interesting part of all of this is that with Oliver, our oldest son, his behavior actually got better this year, which was unexpected given all of the changes we've been through. When we talked about it with him, he said he felt like he had to be on his best behavior to set a good example for the team, which was incredible to hear.

Voss: My cancer is now in remission, and I see my oncologist only once a year, so that makes me happy. If you're alive and you're breathing, it's another day that you get to enjoy with your family.

I think that's the blessing cancer has given me—it's almost like the world has more intense color afterward. You see that things are fleeting, and you understand and appreciate that you may not get this moment again.