Could swearing be the most effective way to cope with the stress of being a parent? 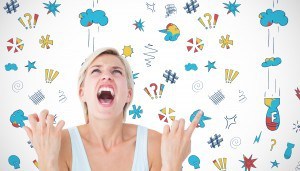 Before your promptly tsk tsk at me in disgust for even daring to put down such a question in words…hear me out.

The other day I read with interest about the benefits of swearing. You know that moment when something really bad happens, you’re really stressed or tread on some Lego and you can not stop the word F&*£! escaping from your lips instinctively. Well, apparently it’s all for a good reason.

Research from Keele University has found that swearing triggers your body’s natural “fight or flight” stress response and actually increases your tolerance to pain. According to an article in The Daily Telegraph, “the researchers tested 64 students’ tolerance to pain by asking them to submerge their hand in a tub of ice water for as long as they could while repeating a series of swear words of their choice. They found that volunteers who swore were able to keep their hands submerged in the water for an average of 40 seconds longer. When questioned about their perceived pain they also rated it as being lower.”

So next time you are at your wits end with your children and swearing with utter abandon into a pillow at the total calamity going on in your household, don’t be so hard on yourself. It looks like you’re only trying to mitigate the pain involved in parenting naturally. And as for childbirth, I finally feel vanquished for my disgusting use of every swear word under the sun during mine…it was just a form of natural pain relief after all!

Do you suffer from a potty mouth? Are you pleased to find out that your swearing finally has some meaning?

***Did this post tickle you? Go on, give it a Tweet, Stumble or Share…you know you want to!***