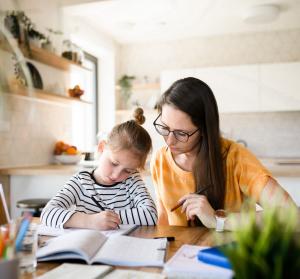 According to a nationwide New York Times survey, only 1 in 7 parents say their children will be returning full time to in-person instruction for the 2020-21 school year, and 4 of 5 parents say they had no outside help in educating or providing childcare for their children.

The survey was conducted among a nationally representative group of 1,081 parents from Aug 4 to 8. Fifty-four percent of mothers said they were in charge of their children's online learning, compared with 29% of fathers, but all parents reported a sense of loss and feeling stranded.

The survey results arrive on the same day as data from the Rapid Assessment of Pandemic Impact on Development Early Childhood Survey Project, which show that 68% of caregivers of children under the age of 5 report a significant increase in stress from before the pandemic, and 78% report their child has been exhibiting behavior problems since most of the United States shuttered schools and daycares in March.

In states where schools have reopened, there have been documented outbreaks and quarantines put in place just days after in-person learning resumed. In Florida, Education Commissioner Richard Corcoran urged school superintendents to be "surgical," not "sweeping" when it came to closing schools with confirmed cases.

Despite some of the highest COVID-19 cases in the country, Florida Governor Ron DeSantishave remained steadfast in their insistence that schools open for in-person learning. According to the Washington Post, DeSantis has likened school openings to a Navy SEAL operation.

"Just as the SEALs surmounted obstacles to bring Osama bin Laden to justice, so, too, would the Martin County school system find a way to provide parents with a meaningful choice of in-person instruction or continued distance learning," the governor said in an address on school reopening.

There were several developments in treatments and vaccines for COVID-19 announced today. The Food and Drug Administration (FDA), following advice from the nation's top scientists, put on hold an emergency use authorization for blood plasma as a COVID-19 treatment until more data is gathered.

Ongoing clinical trails have been inconclusive in determining if the plasma is an effective treatment for the novel virus.

Moderna, the company likely to deliver the first COVID-19 vaccinein the United States, said it is on track to begin testing the vaccine in 30,000 volunteers next month but still needs more minorities to participate in trials. So far, the company says it has more than 8,000 volunteers, reports CNN, but Black and Latinos makes up only 15% of participants, despite accounting for 50% of all US COVID-19 cases.

A new study in Morbidity and Mortality Weekly Report shows that American Indian and Alaska Native people(AI/AN) are another group more likely to be disproportionately affected by the virus.

The reports shows that, in 23 states with race and ethnicity data, the cumulative incidence of laboratory-confirmed COVID-19 among AI/AN people was 3.5 times that among whites, the authors wrote.