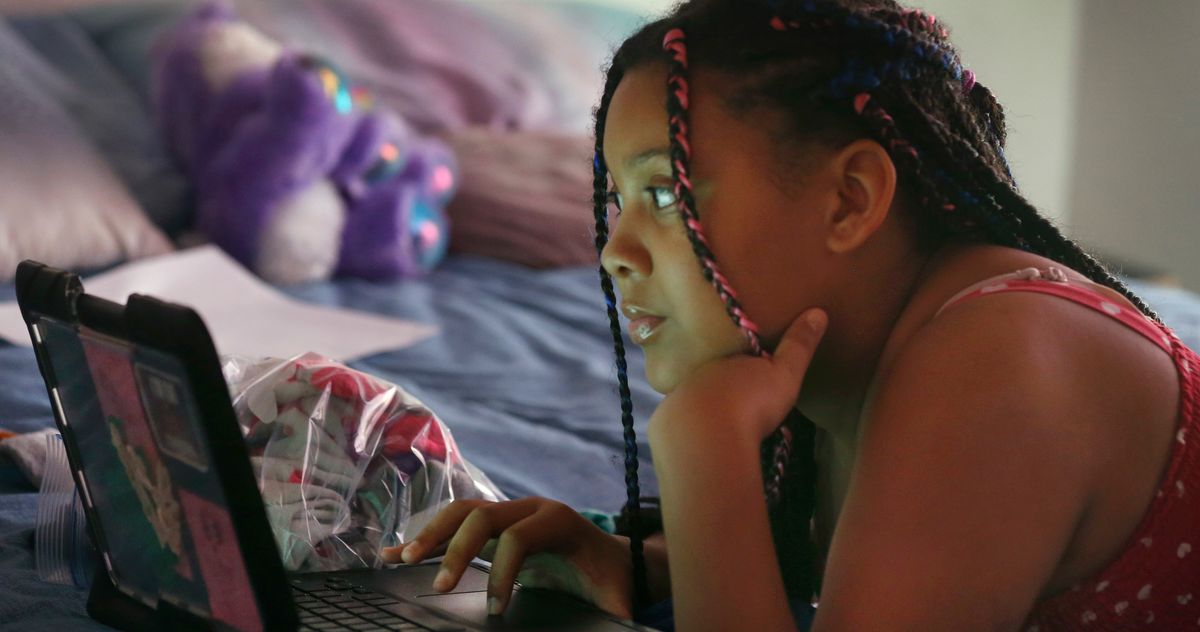 Squint and MomPossible.org looks as though it’s only here to help. “Suddenly schooling at home?” it asks. “Take our quick quiz to unlock your family’s sense of freedom and joy during this time of crisis.” In a series of videos, harried mothers commiserate with women whose children can no longer go to traditional schools. There are legal resources, practical advice, even a Facebook support group. To an isolated and overwhelmed mother, MomPossible.org could be a rare boon.

But the website is more complicated than it initially appears. A logo at the top left-hand side of the page identifies it as a project of the Homeschool Legal Defense Association, a far-right organization with links to anti-abortion, anti-LGBT activists in the U.S. and overseas, including Russia and Brazil. The group’s founder, Michael Farris, now leads the Alliance Defending Freedom, a sprawling legal-advocacy group that opposes marriage equality and civil rights for trans people in the courts. In several places, the site urges mothers to call HSLDA for legal resources and “practical help,” and its “quick start” guide to homeschooling directs parents to become members of the organization. It’s not exactly a harmless source of pandemic advice for moms.

HSLDA’s bid for mainstream appeal arrives at a critical moment for parents. As school districts and states debate reopening plans, parents are beginning to explore nontraditional ways to school. Though it’s too early to know whether the pandemic will grow HSLDA’s membership, other homeschool associations report new interest from frustrated parents. In New Hampshire, groups “are seeing a major increase of inquiries [about] homeschooling around the state. It is not isolated to a handful of communities,” one advocate told New Hampshire Public Radio. Similar reports from Montana, California, and Alaska suggest that the phenomenon has national scope. At the same time, some virtual charter schools say enrollment has surged, a trend they, too, attribute to the pandemic.

But a minefield awaits anxious parents. Though public schools aren’t miniature utopias, the alternatives are often poorly regulated, and that can leave parents and children vulnerable to bad actors. Virtual charter schools and lax homeschooling laws facilitate both educational neglect and, in the case of charters specifically, fraud. A parental exodus from traditional public schools could set children back academically — for good.

Virtual charter schools, which offer a fully online curriculum to students, and advocates for homeschooling make bold promises to parents. Children can learn at their own pace, free from uncaring teachers and onerous regulations. Even in normal times, the pitch has appeal. Harsh discipline and testing regimes can earn public education its critics on the left, too, though charter schools aren’t always much of a reprieve. Draconian — and heavily racialized — discipline policies generate poor publicity for charters, too.

The pandemic didn’t necessarily make public school less popular. It simply added an additional variable to parental decision-making. Parents are bracing for all-digital learning or traditional classroom instruction or maybe some combination of the two, and which one they face depends on where they live, not necessarily what they think is best. If parents believe in-person instruction is too dangerous, they may want to go virtual — if the local district, and their own resources, allow it.

In these circumstances, virtual charter schools and homeschooling can have an attraction. Cybercharters promise parents structure and experience. School districts are scrambling to figure out e-learning for the first time; cybercharters have it down pat, at least in theory. Meanwhile, parents who worry that virtual classes will leave their children behind might prefer to formally homeschool. But both options remove children from the level of oversight provided by traditional public schools. The results can be disastrous.

Once parents remove their children from public school in order to teach them full time at home, they’re essentially on their own. The exact level of oversight varies from state to state, but regulations are generally thin stuff. That situation exists in part owing to HSLDA, for whom homeschooling is a front in a much bigger culture war. Government oversight might come between a parent and his God-given right to teach his children whatever and however he pleases. As Political Research Associates observedin a recent watchdog report, HSLDA has lobbied hard against any proposal to regulate home education, most often in the form of testing requirements, school-district reviews of curriculum plans, and the occasional home visit from the state. The group’s efforts are successful. In 40 states, parents can homeschool without a high-school diploma, and “fewer than half” require some form of testing or evaluation for homeschooled children, ProPublica reported in 2015.

Though groups like HSLDA boast of superior academic outcomes for homeschooled students, the lack of regulation means it’s difficultto track the real success or failure of home education. Meanwhile, high-profile cases of educational neglect and physical abuse illustrate the pitfalls of deregulation. Before David and Louise Turpin imprisoned and starved their 13 children, they told the State of California they intended to operate their own private school at home. They filed the necessary paperwork, and that was the end. The state did not monitor them; never once inquired further about the children in their care. The Turpin case inspired enough temporary horror that some California lawmakers began a push for further regulation. HLSDA opposed them: A representative for the group saidat the time that he was “satisfied” with California’s current homeschooling laws. In a more recent case, fugitives Lori Vallow and Chad Daybell pulled their children, J.J. and Tylee Ryan, out of public school to homeschool not long before the family went missing. The children’s bodies were later discovered on Daybell’s property. The couple now faces charges in their deaths.

While virtual charters offer a greater level of oversight, and keep children in contact with professional teachers, educational outcomes aren’t exactly stellar, either. In Oklahoma, where a Republican governor has refused a mask mandate despite rising cases of COVID-19, one virtual charter school provides a useful case study. Epic Charter Schools is adding 1,000 new students a day, the Associated Press reported earlier this July. Oklahoma Watch, a nonprofit investigative outlet, found that fewer than one in five Epic graduates enrolled in a state college, a rate far lower than that reported by traditional public-school districts. Epic also employed fewer college counselors — three for its entire 21,000-student population — while publicly run schools are required to hire one counselor for every 450 children. Students rushed through their courses; two told the outlet they finished “entire high-school English classes without reading a single novel.” Nationwide, half of all virtual charter schools reported graduation rates of less than 50 percent, EducationWeek reported in 2019.

Epic is also under investigation. An affidavit filed by Oklahoma state investigators in 2019 accused the charter operator of “embezzling millions” by creating “ghost students” to artificially inflate attendance figures, according to the Tulsa World. Epic teachers told the paper that school administrators pushed them to participate in the scheme; two eventually sued. Epic attorneys are still fighting the state auditor over a request to review the charter operator’s spending records. The problem with cybercharters isn’t limited to Oklahoma. In Indiana, a Chalkbeat investigation found that cybercharter schools were rarely penalized for poor performance, and there aren’t many legal mechanisms available to compel oversight bodies to act. Thirty-five virtual or blended-learning charter schools owe the Ohio Department of Education $137 million for misrepresenting enrollment and attendance figures. Half of the institutions have closed, the Columbus Dispatch reported, which means the state might never get its money.

Parents can try to make up academic deficiencies on their own. But most have no teaching experience, and time is a luxury, even if you’re stuck at home. Essential workers are still leaving their homes — and children — for their jobs. Parents who can work from home can find it difficult to balance child care with their professional lives, especially if they’re mothers; the coronavirus did not end the second shift. Parents who have been laid off don’t exactly have a universe of free time at their disposal, either. The act of looking for work is a job on its own, even when there isn’t a historic recession. The virtual charter school must pull its full weight if it’s going to replace parental assistance in the home. For all the same reasons, a formal homeschool curriculum might not be much of a solution, either. If parents become overwhelmed, children have nowhere else to turn. Families are outside the reach of education professionals altogether. (In the interest of full disclosure, I was homeschooled for eight years.)

Parents tend to love their children, of course. The object of homeschooling full time in lieu of virtual education is to make sure students don’t fall behind their peers during the pandemic. But the nation’s homeschooling laws aren’t set up to help parents educate, or to make sure children learn — and neither, for that matter, are the regulations set up to govern virtual charter schools. That lax atmosphere maximizes the power of lobbying and advocacy groups — and for them, the pandemic is a rare opportunity. HSLDA subsidizes its work with membership dues, and its effective lobbying efforts rely on enthusiastic supporters. The friendly new face it displays on MomPossible.org is calculated for recruitment. For virtual charter schools like Epic, enrollment is lucrative. A child’s right to an education is a secondary concern.

Few people are satisfied with the choices at their disposal next month. Teachers, too, are coping with unprecedented demands, often on top of low salaries and scarce funding. But unless a parent can afford private tutors or nannies, on their own or in conjunction with other households of similar means, education alternatives aren’t really alternatives at all.