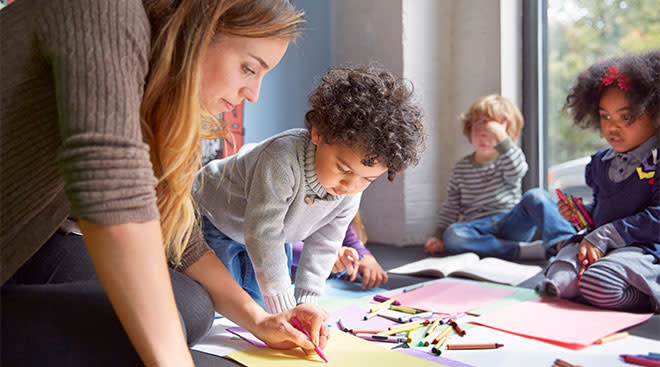 “It became clear that this is real. This is not just a niche interest anymore.”

Many parents are trying to decide whether or not it’s safe to allow their kids to return to in-person schooling in the fall, as both the American Academy of Pediatrics and the Centers for Disease Control have recommended.

As many school districts have already announced their schools will remain closed, parents are desperately looking for alternative solutions. Some are opting for “pandemic pods,” small groups of kids who gather together each day and learn in-person, using online instructions from schools, in a shared space supervised by a hired teacher or rotating parents. Parents can spend up to thousands of dollars each month for the alternative option.

Online, several groups have popped up for these “pandemic pods,” including one for caregivers and parents in the San Francisco area. Started by 39-year-old mom Lian Chang, the group connects parents and caregivers with teachers and provides a space for them to share resources and ask questions. So far, the group has over 22,000 members.

“It became clear that this is real. This is not just a niche interest anymore,” Chang told TODAY Parents. “We’re proud of what we’re doing, and we’re really energized by all the people in our group and excited about how we are able to help people.”

“We just felt like we needed to come up with a viable option that was going to give her the routine and the learning of school but also with the socialization of being around other kids in a safe way,” Melissa Munchick, who has a 4-year-old daughter, also told the outlet.

While the approach seems like an apt solution for these strange times, many have criticized the academic inequality this may bring for low-income families who can not afford to do the same.

“It’s a real question for people—I mean, people want to take care of their own problems and they want to be a good neighbor and citizen,” Chang told TODAY Parents. “I think it just poses real challenges for families in how to navigate both those things.”

Also at the forefront for many parents? Diversity and inclusion. As parents think through how they want their child’s education to look in the fall, some parents are reaching out to BIPOC families to have them join their pods. However, it’s important to not to “tokenize” families of color, Vicki Keire, a biracial mother and teacher based in Florida, explained.

“I would not want to join a pod as an afterthought. I would not want to be ‘included’ in a system I did not help create,” Keire told Insider. “I’d want to feel as if I had been able to help craft the pod’s rules, goals, expectations, and that my voice had been valued.”

Similarly, many families are also thinking about education around equity and social justice. According to Insider, one Facebook group for BIPOC parents has also popped up to support a similar solution to schooling, as well as to teach curriculums focused on equity and justice. The group is open to non-BIPOC parents who are “committed to liberation.”

While it’s uncertain what school will look like in the fall, it’s clear that parents are desperate for better solutions. Many simply cannot keep working and homeschooling kids simultaneously—for the sake of their own mental health and their kids’.