5 Toxic Parenting Mistakes You Must Avoid at all Costs 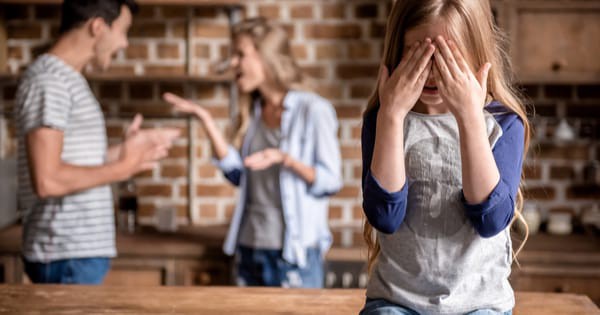 A few years ago, I worked with a husband and wife who hated each other. Frank and Janet* had a 9-year-old daughter and a 3-year-old son. They had a bad habit of screaming at one another in front of them. She’d call him a “motherf-cking coward” and he’d call her a “psycho c-nt.”

Frank and Janet worked their fingers to the bone in thankless jobs that required erratic hours. At home, there was neither consistency nor structure, two things that are vital for the effective functioning of a family with young kids. Their son threw epic psycho-tantrums, the frequency, and duration of which were alarming, even for a toddler. Their daughter was defiant and disrespectful.

We got involved because their daughter set a school bus on fire (long story) and so she was on supervised probation with the Department of Juvenile Justice. I work with families in their homes, because in cases like these, having a child talk to a therapist in some office for an hour twice a month just doesn’t cut it.

Family Systems Theory holds that children can become “symptom bearers” in a dysfunctional home. Basically, a child’s behavioral problems or mental illness effectively mirrors the problems of the family as a whole. In this case, the son was throwing tantrums and the daughter was being defiant because that’s exactly what was going on in the home.

I confronted Frank and Janet during one session about their arguing. The kids were sitting on the floor, playing games on their tablets. I was saying to them that children are always listening, even if it doesn’t seem like they are.

“Children learn how to communicate from their parents,” I was telling them. “What kind of message do you think they receive when all they see is Mom and Dad fighting?”

Janet was incredulous. “This is ridiculous,” she said, shooting a coarse look at Frank, whose eyes belied his complicity. “We hardly ever argue in front of them.”

The three-year-old looked up as if on cue. “You do too!” he shouted.

“Yeah, really,” their daughter chimed in, rolling her eyes.

This isn’t hard to understand. When adults start behaving like adults, problems like these tend to go away. The challenge is getting the adults to see that they are the ones who cause most of the problems.

When it comes to family, everything is relative. If Mom and Dad are fighting, you can bet that it relates to Billy’s problems at school. If Billy is defiant, you can bet it relates to communication problems between Mom and Dad. And all this stuff is affecting little Susie as well, who is starting to wet the bed because everyone is fighting and she is scared.

The problem — as well as the solution — begins and ends with the adults. Period. Full stop. End of sentence. But too often, parents would rather chase rabbits instead of admitting their own role as arbiters of the dysfunctional family system. They will focus on the problems at school, or the defiance, or the bed wetting, without stopping for a moment to acknowledge that they might be the cause of it all.

In every dysfunctional family, you’ll see the same unbelievably toxic behaviors and traits. Just one of them alone is enough to cause severe problems. Unfortunately, these behaviors tend to come as a package deal.

Good parents always make a point of modeling positive behaviors, even if it means admitting they were wrong. Some people think apologies are a sign of weakness, but the opposite is true. Adults alwaystake responsibilities for their actions. How can we reasonably expect our children to accept consequences if we don’t apply that same standard to ourselves?

This is an issue though that is far greater than saying you’re sorry. Parents who never accept responsibility themselves are also the ones who undermine disciplinary measures at school. They make up excuses. They justify bad behaviors. Ever seen a parent arguing with a school principal? My so and so would neverdo such a thing, they say.

Several years ago, I worked at a military academy down in Florida. One day, a new parent came up to me with his son in tow. “Commander Withers,” he said, “If Kevin here ever gets cute with you, you have my permission to bury him under one of these buildings.”

I could have kissed that man. Would that all parents gave teacherscarte blanche to discipline their kids.

Here’s a situation that happens more than you might think. A few years ago, Uncle Ted molested Mom and Dad’s oldest daughter. She was 13 at the time. She’s 15 now — grades are slipping, she’s growing more and more defiant, she’s dabbling in drugs and having sex at school. The thing is, Uncle Ted is still a regular in the home, because Ted is Dad’s brother, and he’s a good man, so the family just pretends it never happened.

The 15-year-old starts acting out, because her parents betrayed her and she doesn’t feel safe anymore. And it’s going to get worse, because now Uncle Ted has his eyes on the youngest daughter, and she’s only 6. And the cycle will repeat because that is what families like this do. Incest tends to get passed down from one generation to another.

Could you imagine letting a sex offender near your child? Probably not. But it happens all the time. Family members are, without question, the ones who are most likely to perpetrate.

Parents often fail to take responsibility for the safety of their children, because they are prideful and way too concerned about what their neighbors might think. To acknowledge there is a problem — such as the case with Uncle Ted — is to admit there is actuallya problem.

Instead, the secret keepers keep quiet and they forbid their children to talk about it, as if silence erases trauma. And when the kids start to act out or engage in self-harm, the parents fail to connect the dots and they chalk it up to a phase, or bad behavior, or the school systems, or their peers. No insight. No personal responsibility. No actual parenting.

This attitude is often multi-generational. People inherit lots of things from their parents — eye color and skin pigment, for example. We also tend to inherit abstract things, too. Religious beliefs, culture, political persuasions. Some families pass down rape and incest. Several years ago, in Asheville, NC, Buncombe County Child Protective Services rescued an 11-year-old boy who was being molested by both his grandparents andhis parents. At the same time. It was not an isolated incident.

Secrets can destroy. If you’ve grown up in a family of secret-keepers, you know exactly what I’m talking about.

If you grow up in a family full of arguers, you think it’s normal. It isn’t. Plenty of parents argue, which is not inherently problematic. The problem comes when the parents do not have the presence of mind to argue away from their children.

In mentally ill families, this is always a major issue. If you are 8 years old, and your parents are always screaming at one another, how are you supposed to learn healthy communication? The kids end up arguing as much with the adults as they argue with themselves, and the adults end up arguing with the children, as if that is somehow an effective use of their time.

Have adult conversations in private. Period. If you don’t have the presence of mind to perform this one simple task, please refrain from procreating. Arguing in front of children is both mentally and verbally abusive and sends a terrible signal about how they should handle conflict

Parents who argue with their children lose 100% of the time. What they fail to realize is that arguing serves two very different purposes, depending on your age. For adults, arguing is an (ineffective) way to express one’s rhetorical stance and tell the other person why they are wrong. For kids, the sole purpose of arguing is to elicit an emotional response from you. The moment you yell, you’ve lost.

Firm boundaries are a critical feature of healthy families. One of these boundaries is a concept we call “Role Performance.” In the most basic terms, adults are supposed to act like adults and children are supposed to act like children. In dysfunctional families, these roles are often blurred. In dysfunctional families, parents tend to expose their children to things that are not appropriate for their age. I worked with a 9-year-old once who was in charge of paying bills and a 45-year-old mother who had to get permission from her 11-year-old son before she went out on dates. Frequently, children of divorced parents find themselves relaying messages or brokering deals. These are all examples of things that children have no business doing.

To the casual observer, “mature” children seem ideal. However, when we require children to perform adult duties, they inevitably fall victim to anxiety and distress because they lack the skills, wisdom, and emotional stability to deal with the inherent stress.

Adults who get overwhelmed with stress tend to have relatively sophisticated coping skills. They may vent to a colleague or call a friend or go to the gym. Kids, having no idea how to manage stress, tend to act out. Invariably, children with behavioral disorders such as oppositional-defiance are responding to the stresses of age-inappropriate roles and responsibilities.

It’s totally fine to assign tasks to children, provided they are developmentally appropriate. Adolescents can and should be expected to clean up after themselves and keep their rooms tidy. Teenagers can and should be expected to complete homework assignments, do yard work, and provided limited supervision for younger children. Even toddlers can be assigned basic chores.

But having an adolescent approve who you date or be responsible for paying bills? No, no, no. Hell, no.

Abuse comes in lots of forms — physical, sexual, verbal. The most common one I see though is emotional abuse. Experience has taught me that DSS will intervene if you spank your kids too hard, but parents can be emotionally abusive with impunity. Maybe it’s because physical and sexual abuse are crimes and emotional abuse is not. It may be because emotional abuse is difficult to prove. It may also be that, just like everyone else in the mental health field, DSS is overworked, comically underpaid, and grossly outnumbered.

Emotional abuse is pervasive and dangerous, but it often does not look like typical abuse. Here are some examples.

To treat a child, you must first treat the parents and the dysfunctional family system. The good news here is that this is something that can be done. The challenging part though for many parents is that they first must admit that maybe, just maybe, they are the ones who are ultimately responsible for the problem.