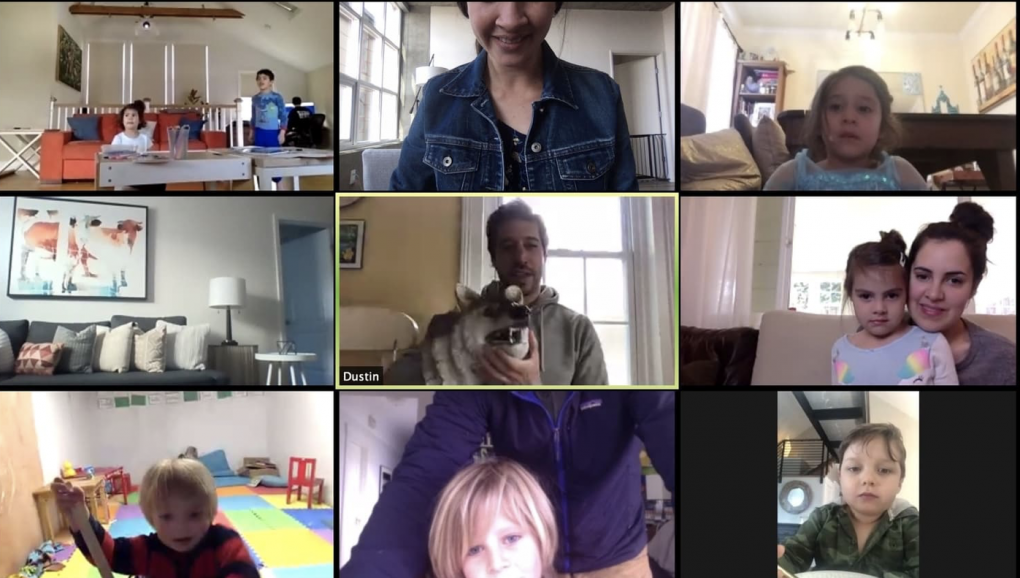 How Tutors are Teaching Kids Online and Helping Overwhelmed Parents
Melody Serra (top row, center), a former kindergarten teacher, teaches a class to young children over Zoom.
(Emily Kaplan for The Hechinger Report)
This story about volunteer teachers was produced by The Hechinger Report , a nonprofit, independent news organization focused on inequality and innovation in education. Sign up for the Hechinger newsletter .
BROOKLYN, N.Y. — Before I became a journalist, my life was structured according to school bells: I woke up at 6 a.m., drove to school, and spent my days in my second grade classroom, attending to the needs of 7- and 8-year-olds.
After becoming a freelance journalist, my daily life looked much different: I woke up when I wanted, except when I was traveling on assignment. I talked to dozens of people per day, or to no one at all. I stopped thinking about methods for keeping track of pencils and haven’t thought about spelling rules in years.
Until the coronavirus happened.
Now, I find myself dusting off old strategies and using out-of-shape teaching muscles. And while the in-person nature of my situation may be unique — I’m quarantining with the family who lives upstairs, spending time with the children while their parents work — I’ve discovered that I’m part of a group of former teachers returning to education during the pandemic to help educate the 55.1 million public and private school students stuck at home.
Sponsored
Motivated by a desire to contribute, former educators around the country are returning to the classroom, virtually. Many are volunteers who are eager to help bored kids and overwhelmed parents, while others are using teaching to pay the bills while their professional lives are uncertain.
Melody Serra is a 33-year-old former kindergarten teacher living in San Francisco. After making a career switch, she now teaches software engineering to low-income college students, some of whom have children.
When schools began to close in the Bay Area, Serra said several of the parents in her classes were anxious about how they would get their work done with children at home. “I realized that this was something that everyone was worried about,” she said.
Serra decided to put together a virtual class for her students’ children and opened them to any child who might want to join. Now, she offers a free hour-long class over Zoom, a video conferencing program, three times a week.
Every class covers a broad theme, such as outer space, octopuses, or Antarctica. Her students range in age from 4 to 10, and while most are located in the Bay Area, she said she’s had children drop in from as far away as the United Kingdom.
On the other side of the country, the coronavirus has put medical student Melissa Robinson, 24, on hold, waiting to finish her third year at the Donald and Barbara Zucker School of Medicine at Hofstra/Northwell on Long Island. Finding herself with more time on her hands since clinical rotations have been suspended, Robinson organized a group of her classmates into a tutoring corps that provides online help to students in four high-poverty neighborhoods near campus.
“Some parents are asking us just to read to their children because they don’t have time to do that anymore,” she said.
Danielle Soberman, a medical student at the Donald and Barbara Zucker School of Medicine, tutors a ninth grader in physics.
(Courtesy of Danielle Soberman)
And while Serra and the Hofstra medical students provide instruction for free, some educators are taking paid virtual teaching jobs with existing online education outlets.
Andrew Geant, the co-founder and CEO of Wyzant, a website that connects tutors to students, said his company has seen tutoring applications increase by 75 percent since stay-at-home orders began to take effect in March. The new applicants represent a 40 percent increase in applications from licensed teachers.
Brian Galvin is the Chief Academic Officer of Varsity Tutors, a company whose focus, pre-coronavirus, was helping students prepare for standardized tests. In recent weeks, the company has focused on developing a program called Virtual School Day, which offers 100 live classes and guarantees at least 30 hours of video instruction for every grade level, every week. From his home in Ventura, California, Galvin told me that many of the people the company has hired to create this curriculum are former teachers or teachers at independent schools that have not shifted to online instruction.
Galvin says he’s been impressed by their expertise.
“They know the standards, they know the techniques, and they know where kids will need to be when school does reopen,” he said.
At least here in New York City, no one knows quite when that will be — and the kids I’m spending my days with aren’t holding their breath. The third grader in my charge said that though she wishes she were back with her friends, she’s become accustomed to staying at home.
“It feels normal but abnormal. Like, now it feels normal but it isn’t normal.”
This story about volunteer teachers was produced by The Hechinger Report , a nonprofit, independent news organization focused on inequality and innovation in education. Sign up for the Hechinger newsletter .
See Comments