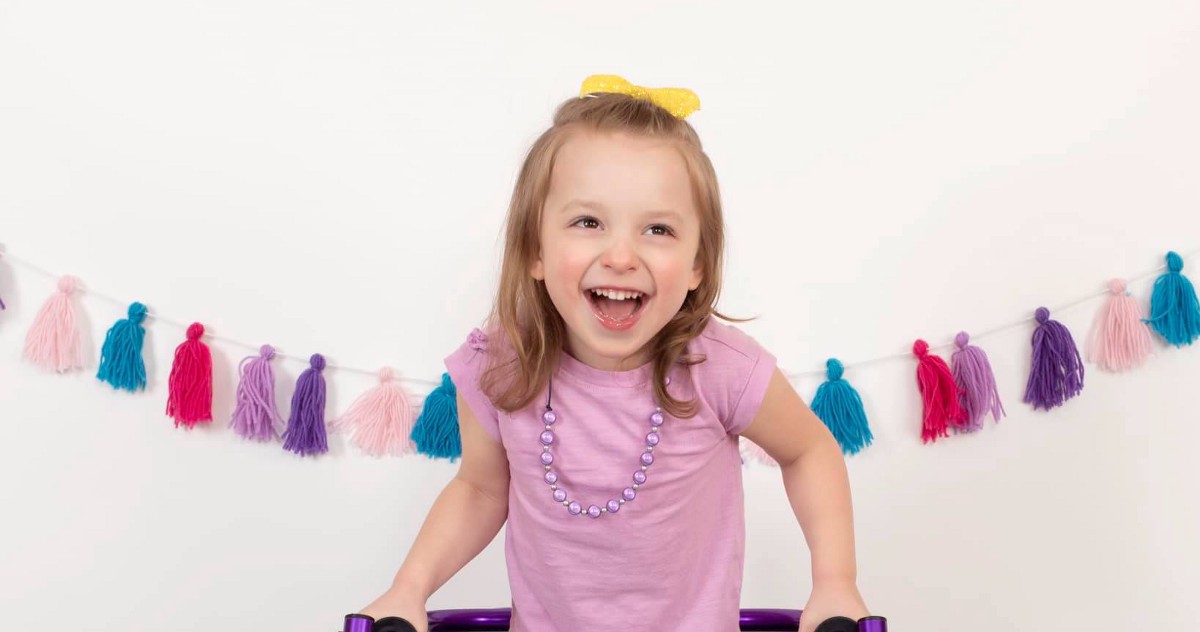 From an idea that struck her like a bolt of lightning while clothing shopping for her young daughter, entrepreneur, feminist and mom Emilee Palomino created a line of leggings that celebrate STEM. Smarty Girl pants come in colorful, feminine patterns featuring insects, trucks, robots and other iconography usually reserved for boys. From her home in Wichita, Kansas, Palomino has created a brand beloved by Instagram fashion icons and moms of all stripes (myself included!), far and wide. I interviewed her by phone to find out why she created Smarty Girl and how she fights the subtle stereotypes hidden in plain sight.4

Sasha: Can you tell them the very first inkling of what led you on the path to start Smarty Girl?

Emilee: The light bulb moment was shopping in a boys’ section of a department store. There were these huge airplanes hanging from the ceiling and I thought, “Oh yeah, that’s cool. I want to get my daughter an airplane shirt or anything with airplanes on it.” And she was one year old at the time and so I looked for something in pink and purple and I couldn’t find it in that department store, I thought, “Well, I’ll just look online.” Couldn’t find anything online, and I was like, “Okay, something’s not right here.” And I don’t have any problem with dressing her in blue and green airplanes, but I just thought if I do that then, unfortunately, she’s going to think that airplanes are for boys. And so I couldn’t live with myself if my daughter thought that airplanes were for boys because I’m from Wichita. Our city is known as the aviation capital of the world. Amelia Earhart is from Kansas. I grew up going to air shows and so it just didn’t sit right with me that my daughter would think that airplanes are for boys. Then I kind of looked around and noticed, well, it’s not only airplanes, but it’s robots, and it’s outer space, and it’s sharks, and it’s construction, and it’s insects. And really I realized it’s about being curious, and being scientifically minded, and being strong, and tough, and adventurous, and willing to get your hands dirty, and wanting to build and fix things. I realized all of that is being marketed to boys, and girls are getting hearts, princesses, flowers, butterflies, unicorns, mermaids, which there’s nothing wrong with those things. I am drawn to all of those things, they’re perfectly fine. But I realized that my daughter wasn’t going to be receiving the same messages as boys, who are being told to be adventurous, and indulge your curiosities, and it just wasn’t okay with me. I’m from a family of entrepreneurs. I got my bachelors in business administration. And I’ve just always been trying to think of an idea of a business to start. So it just all came together just right then and there.

Sasha: You make such a good point about this idea of the messages that children get from clothing and toys that are marketed towards them. I wonder what you’ve seen in your daughter or in your customers that has upended some of the impact that some of these messages. Are there moments where you think, “Wow, this is working”?

Emilee: Yeah, for sure. You’re right, the gender stereotypes are from birth when it comes to clothing, and toys, and the baby showers that we throw for our kids, and the way that we decorate their nurseries. I can’t fight that alone. And also I don’t really try to fight it, because I loved princesses when I was a kid and there’s nothing wrong with loving something that’s sparkly, and twirly, and pretty, and shiny. The goal is not for my daughter to not like princesses and Barbies, it’s just to provide more options. When I was a kid I thought that girls are bad at science. I don’t think anyone ever told me that, but I think I just believed it because I wasn’t exposed to that type of stuff. I just want my daughter to know that girls are just as skilled in STEM as boys and all kids should be taught that nothing is off limits.

Sasha: How do you think creatures like dinosaurs and insects became sort of gendered?

Emilee: If you think about paleontology, the idea of paleontologists digging in the dirt. Boys historically have only been the ones who have encouraged to dig in dirt and boys are the only ones who should go outside and catch bugs and frogs with their hands, and pick up snakes. And girls have always been taught to be pretty and polite and so I’m excited to be a part of changing that narrative, at least in my home. And I feel so proud that other little girls around the world are affected by this message that it’s cool to like science, and it’s cool to like robots and rocket ships. And hopefully I’m having an impact on their minds.

Sasha: In terms of like the idea of pink and purple being for girls, do you see that changing as gender norms become more fluid?

Emilee: I hope that in the future all kids wear all colors, and it’s normal to see boys and girls in a rainbow of colors in an ideal world. I give my daughter options for wearing whatever colors she wants, and I guess it’s just beyond my control that she is drawn to pink and purple. Also though I have been drawn to those two colors since I was a kid too, so I can’t fault her for that.

Sasha: I remember being a little girl and seeing the Barbie Mattel hot pink, and feeling almost high from looking at it.

Emilee: I do love that color. One of my favorite colors is pink. A lot of my prints have details like the dinosaurs will have hair bows or the sharks have necklaces, just sort of something clever that I’ve snuck in there just because those are things that I like. Not every girl has to like the stereotypically girly stuff, but I just did it because that’s what I like.

Sasha: How did you figure out how to make leggings?

Emilee: It’s all just been failing, and learning, falling on my face and getting up. And it’s just me and everything I know I learned because I tried it and failed and tried a different way, and it worked. I’ve done a lot of Googling, and watching YouTube videos, and listening to podcasts, and reading blogs and of course books about people who have done these things. And really any question I’ve had, I just figured it out along the way. I stumbled a lot, but I keep going. I found my first factory on the internet. They were in China. The language barrier was difficult and with the time difference, they wouldn’t start replying to my emails until late at night, so if I wanted to communicate with them, I had to stay up all night to email back and forth. Now I’m working with Peru though. They’re on the same time zone as I am, so it’s just nice to be able to go back and forth with them during the business day. The language barrier is not as bad. And Peru is known for their textile artisans, and they are just super professional and skilled at what they do with craftsmanship and clothing design and softness of their cotton. And so I’m super happy.

Sasha: I think that’s such an important message about trial and error.

Emilee: I feel so fortunate that every day I’m able to work towards something that I feel passionate about because I’ve worked corporate jobs and I remember feeling like my soul was being crushed working in a gray cubicle all day. So far my company is just me. I warehouse all the leggings in my basement and my husband helps me fulfill orders in the evening. We sit down there with our daughter. Usually we try to distract her on the iPad or something, but she wants to be just in the middle of all of it. She wants to be, using scissors, using markers, using our tape, she just wants to be all up in the office supplies.

Sasha: You live in a relatively conservative part of the country. Do you ever get pushback from people who have a more traditional view?

Emilee: I have never personally received pushback. Not in real life or online. I wear a necklace that says “feminist.” Some people think it’s a dirty word, they don’t realize the definition is literally believing in equality of the sexes. How can someone not be a feminist? One time a guy asked, “What does that say?” And I just said, “It says ‘feminist.’” And he didn’t say anything else. I think that through Facebook and internet comment sections, we really feel that like, “Oh wow, people who disagree with us are all around and just ready to argue,” but really it doesn’t feel like that in real life. Because I’ve had no issues being a liberal Democrat in Wichita, Kansas. And so for that I guess I should be thankful. My daughter and I marched in the inaugural Women’s March in 2017. This was a few months after I had the idea for Smarty Girl, and right when Donald Trump was inaugurated. I was seething mad. And so to know that 7 million women around the world also marched and were feeling the same outrage and supporting the same ideals as me and to have my daughter there with me, that really stoked the fire in my heart. That really was just a wind at my back that pushed me forward knowing that I’m not alone. All these women feel the same way I do, and that really propelled me forward. Just the whole feeling of being involved in the Women’s March and knowing that I wasn’t alone in my outrage and my feminism.

Sasha: I totally agree. I was marching here in Boston. My daughter was in my belly at that point. It was a really intense period of time.

Emilee: I want my daughter to feel empowered and to hear “you are strong, you are brave, you can do hard things.” I was never told that. And so now I just feel like it’s an honor that I get to build my daughter up in such a way. I can’t wait to see what she becomes.

Sasha: What do you see in society that gives you hope for a bright future?

Emilee: My hope for a bright future comes from knowing that a lot of other parents are like me and are raising their daughters to be strong, and brave, and curious, and empowered to explore their interests and know that nothing is off limits. And also parents who are raising their boys to be caring and thoughtful. The outdated cliché of ‘boys will be boys’ is going out of style, and it’s now boys will be good humans and girls will be good humans. That gives me hope for the future where we are raising a generation of kids to be kind and hopefully embrace science and save our planet.