Modelling the shape of the mental health crisis after COVID 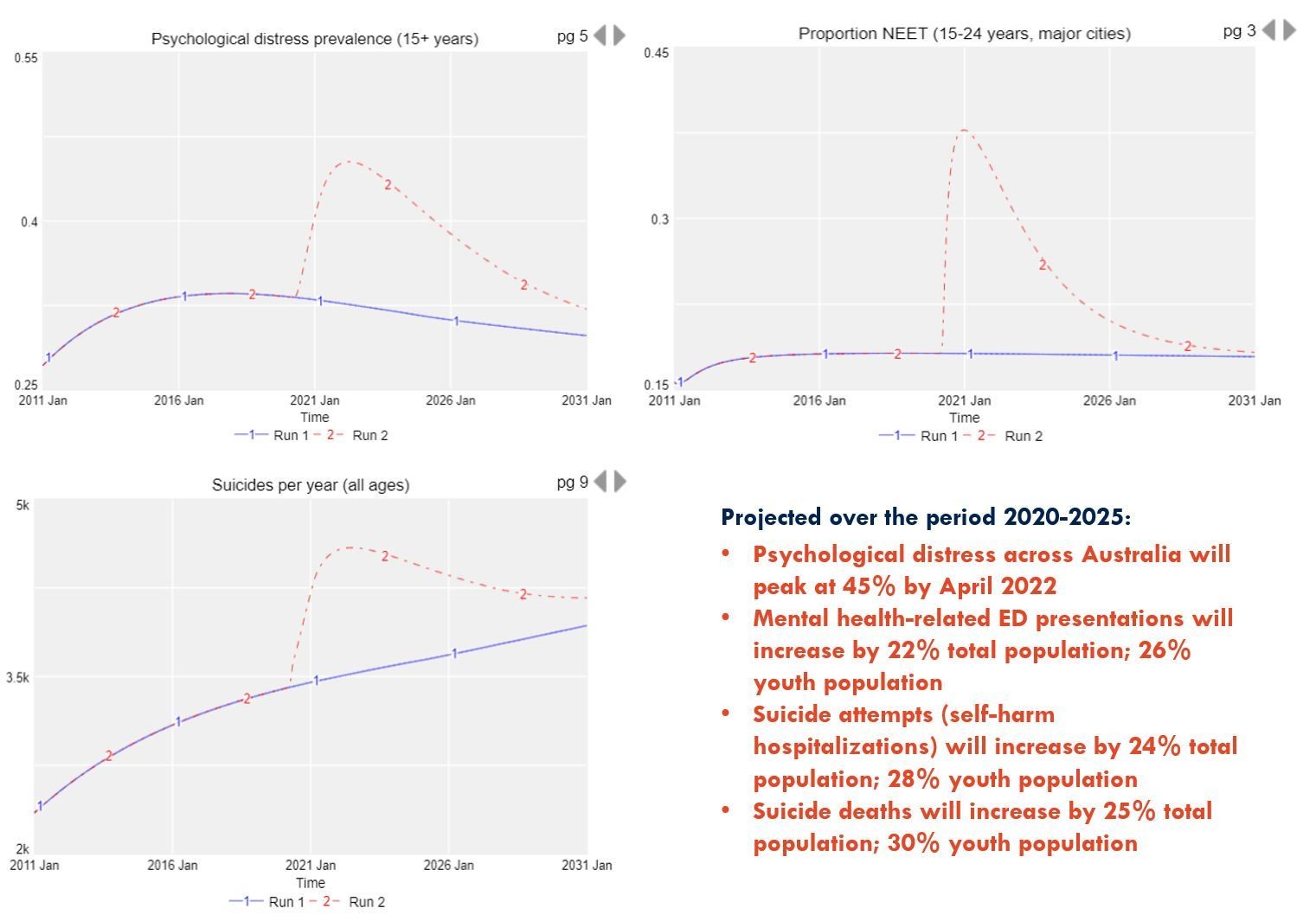 In the face of a pandemic and global recession, what price will nations pay in lost human potential? What contributions to civil society, to the arts, to science and technology, to the economy, and to humanity will be lost as hardships increase across communities, and the trajectories for young people are hampered by diminished opportunity? We may never be able to quantify the true extent of this loss, but the concept of 'mental wealth' provides an important starting point.

A nation’s mental wealth is defined as the collective cognitive and emotional resources of citizens. It includes people’s mental capital along with mental health and well-being. How a nation nurtures mental capital, mental health and wellbeing through education, economic security, housing, healthcare, cultural safety, and through equal access to opportunity, will have a significant effect on its economic competitiveness and prosperity, and the collective wellbeing and resilience of communities.

According to a European Commission report eight years after the Great Recession, almost one-third of young people remained at risk of poverty or social exclusion, facing long-term unemployment, or under-employment. Australia, a country that performed better than most advanced economies on nearly all relevant indicators during this period, reported similar ‘scarring’ impacts on young people, with a ‘lost decade’ of income growth, a decline in occupational choices, employment quality and quantity, and greater exposure to future economic shocks.

Added to this are the corollaries of the pandemic itself - social isolation and chronic uncertainty that are exacerbating psychological distress and mental health problems among previously healthy people and those with pre-existing conditions. What can be done to mitigate the impacts of the pandemic and recession on national mental wealth and set us on the best path to recovery?

Early in the pandemic, Australian efforts to mitigate the mental health impacts naturally focused on the health sector response. There were national investments to increase the capacity of helplines, provide family support to reduce domestic violence, scale up telehealth, and bolster psychological supports through online resources. But will this be enough? Over the last decade rates of mental illness and suicide in Australia have not been decreasing. With such inertia, how can we hope to effectively respond to this current crisis?

This complexity has resulted in an approach that promotes broad strategies, based on the rationale that if more evidence-based initiatives are funded, the impact is simply additive. This simplistic ‘more is better’ perspective is reflected in vast array of priority actions seen in previous government plans. These sorts of ‘non-strategic’ strategic plans provide no estimates of the scale of impact they are likely to have and could actually be undermining the impact of investments by spreading available resources broadly and ineffectually. This is not a criticism of government agencies, it is just a natural, well-meaning response when the tools for precise investment and focus are lacking.

To understand and manage complexity, other fields rely on the analytic techniques of complex systems science. Disciplines as diverse as physics, information theory, computer science, ecology, meteorology, sociology, and biology have harnessed complex systems modelling and simulation to better understand complex phenomena from the Earth’s climate, to the human brain, to crowd behaviour, traffic congestion, and racial segregation.

In contrast, policy in the health and social sectors is largely devoid of these sophisticated tools. The lack of engagement with systems modelling and simulation to guide decision making confines nations to delayed actions, wrong turns, inefficiency, and a lack of agility in our responses to a rapidly changing world.

Without these tools, on what basis do governments make decisions about how to respond to the mental health crisis? What combination of initiatives or reforms should be prioritised? What impacts should we expect? Will there be rebound effects when we remove them? Will there be unintended consequences? Without these tools, we are fumbling around in the dark, trying to make important strategic decisions that will impact people’s lives in fundamental ways.

The Brain and Mind Centre of the University of Sydney have brought together expertise in mathematics, biostatistics, epidemiology, psychology, psychiatry, social science, policy, and economics, to build systems models that are capable of informing clinical care coordination, mental health policy and planning, and system reform. We have developed the first national systems model of COVID-mental health and suicide that incorporates the feedbacks between the economy, mental health and policy responses and forecasts the impact on key mental health outcomes.

The projected cumulative cost of lost productivity associated with psychological distress, hospitalisations, and suicide over the period 2020 - 2025 is estimated at $114 billion, including $11.3 billion in lost productivity among the young. This productivity loss is not traditionally accounted for in economic analyses.

This trajectory is not inevitable. The primary purpose of the model is to provide a safe environment to test a range of strategies to determine the best combination that could help avoid this trajectory (Figure 2). Of the interventions simulated, employment programs (JobKeeper) were the single most effective strategy for mitigating the adverse mental health impacts of the COVID-19 crisis; however, ceasing this program too early in the trajectory of economic recovery decreases their impact (approximately 390 lives are projected to be saved by keeping JobKeeper in place for 2 years (Figure 3). Some initiatives are forecast to make things worse (Figure 4).

There remain many unanswered questions, but the interdisciplinary science of complex systems is shining a light on the darkness. To paraphrase fellow systems scientists in the US, while we might still be fumbling in low light….it’s the low light of dawn.