How to slash carbon emissions while growing the economy, in one chart 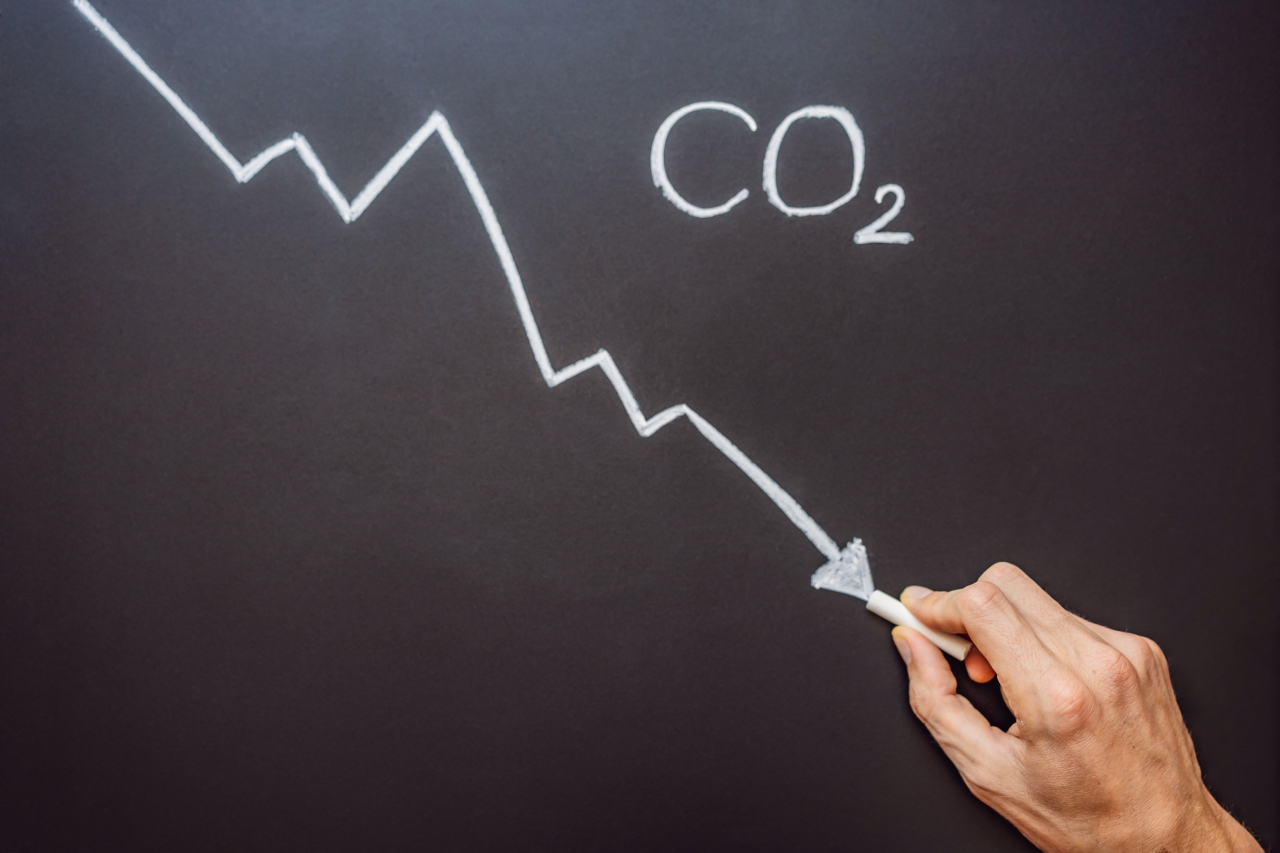 There’s a common intuition that says we can either have a healthy climate, or a growing economy, but not both.

Economic activity, so long as it’s powered by fossil fuels — which still provides about 80 percent of the world’s energy — creates greenhouse gas emissions. So it seems to follow that if we want to emit fewer greenhouse gasses, we’re going to have to sacrifice some economic growth, even though raising average income levels is a key part of reducing poverty.

This creates a horrible dilemma, because fighting climate change and fighting poverty are both hugely important goals. As developing countries are making clear at the ongoing COP27 climate summit in Egypt, we really don’t want to shortchange either one.

Fortunately, we may not have to.

The evidence comes from more than 30 countries that have already achieved what’s known as “absolute decoupling.” That means they’ve figured out how to reduce carbon emissions while continuing to grow economically, so those goals are not incompatible. Note that these are not just per capita measures; we’re talking about total emissions and total economies here.

Over at Our World in Data, the researcher Max Roser created a great chart that shows 25 of the countries that have pulled off this feat over the past couple decades.

As you look at it, you might be thinking: What about the fact that lots of countries outsource carbon-intensive industries to other, often poorer countries, then import the goods? Surely this chart isn’t taking all that outsourced production into account!

In fact, it is. What the chart shows are consumption-based emissions, meaning they account for the emissions caused by stuff that was produced outside a country but consumed inside it.

The obvious question here is: How were these countries able to decarbonize as much as they did without lowering economic growth?

Many factors have made this possible, including technological progress on cheaper renewables and new regulations on air pollution, which enable countries to reduce the greenhouse gas intensity of their economy — the amount of carbon embedded in each economic buck. Another key part of the picture has been putting a price on carbon, so that those who cause emissions have to pay for them. Carbon pricing is based on a simple idea — if the price of a product goes up, consumption goes down — and it’s turned out to be very effective in countries like Sweden, Germany, and the UK.

The countries in the chart show that there doesn’t have to be a tradeoff between reducing emissions and growing the economy, as many economists and laypeople once assumed. And it’s not just that emissions-reducing policies are not fundamentally hostile to the economy. In fact, these policies can actually boost economic growth in the coming decades. Investing in climate change mitigation now means we’ll have to spend less in the future — on rebuilding after fires and floods, on coping with premature deaths and the lost productivity that results from them, and more.

That means, as Roser put it over at Our World in Data, “Fighting climate change is not just compatible with fighting poverty, the two goals — to reduce emissions and to increase economic growth — actually strengthen each other.”

Or at least, they can, with the right policies in place.

Although we know decoupling is possible, a big question remains: Will it be enough to reduce emissions as fast as we need to — meaning, fast enough to stave off the climate emergency? After all, while some relatively wealthy countries are decoupling, other countries are increasing their emissions.

Notably, most carbon emissions in the coming decades will be coming from emerging economies — like India or China — which will have mounting energy needs as they develop into middle-income countries. You don’t see those countries on the chart above, and you might ask whether it’s even possible for them to achieve decoupling anytime soon if they want to improve standards of living for their populations. (Despite the sheer size of its economy, China’s per-capita GDP is around $21,000 — less than a third that of the US — while India’s is just around $8,000.)

But there’s some room for optimism here, too.

Let’s look at India. According to research from the World Resources Institute, India doesn’t have to choose between climate action and its economy. By putting in place the right policies — for instance, phasing in a carbon tax — it could cut its projected emissions to one-third and achieve a GDP that’s 1.5 percent higher compared to business-as-usual by 2050. Along the way it would also create 40 million new jobs and avert 9.4 million premature deaths, as reducing the use of fossil fuels would lead to a drop in harmful air pollutants.

This wouldn’t happen overnight. There are some short-term costs associated with moving away from fossil fuels and building clean-energy technologies. But it’s an investment worth making, since it would soon lead to net savings for the country. In fact, the researchers’ analysis finds that the savings from avoiding fossil fuel use would start to outweigh the cost of clean technologies within this decade. By 2050, India could be looking at net savings of $965 billion!

India’s clean energy transformation is already underway. Some experts say that the low-carbon development pathway it creates for itself can serve as a blueprint for other developing economies.

Meanwhile, in China, emissions are expected to peak before 2030, thanks to the gigantic build-out of clean energy there. The country is rapidly adopting wind and solar power and embracing electric vehicles.

“China looks like it’s going to be the first big middle-income country to absolutely decouple — in the next five or six years, hopefully,” Zeke Hausfather, the climate research lead at Stripe and a research scientist at Berkeley Earth, told me.

Some developing countries — say, in sub-Saharan Africa — will probably need to keep relying on fossil fuels for certain sectors of their economies over the next few decades. But there’s promise there, too. As climate and energy experts from the Breakthrough Institute note in Foreign Policy:

All of this explains why, for the first time, the International Energy Agency recently announced that it expects total fossil fuel use to peak and then decline around 2027. That’s just five years away. In its annual World Energy Outlook, it emphasizes just how momentous this is: “Global fossil fuel use has risen alongside GDP since the start of the industrial revolution in the 18th century: putting this rise into reverse while continuing to expand the global economy will be a pivotal moment in energy history.”

Likewise, Hausfather says that even though we currently have few examples of decoupling among low- or middle-income countries (which tend to focus more on energy-intensive manufacturing), it’s just a matter of time before decoupling becomes the norm worldwide.

But how much time? Will that moment come fast enough to avoid extremely dangerous levels of warming?

There is no preordained answer.

“It depends on how quickly we make [clean energy] technology cheap,” Hausfather told me. “And political will certainly matters a lot, both in terms of making the technology cheap — it’s government investments that scale these things — and in speeding up the transition and pushing back against vested interests that might slow it down.”

It should go without saying that the billions of people living in the world’s poorest countries deserve a shot at escaping poverty. They deserve to see their incomes increase to a decent level, so they can access things like medicine, childcare, and education.

As Roser explains, there are two ways people’s income can increase:

When thinking about any country’s path to decoupling, it makes sense to look at both of these.

In rich countries like the US, where the size of the economic pie is huge, a lot could be achieved by just slicing it up more equally. Whether these countries should also keep treating economic growth as a policy priority — or whether they should slow, stop, or even shrink their economies — is a question at the heart of the fiery “degrowth” debate.

Whatever you think about that question, it’s important to realize that it’s a totally separate question from what the world’s poorest countries need to do. The key thing to understand here is that for low-income countries, tackling inequality alone will not be enough to address poverty. In a country like Madagascar, say, or Zambia, the economic pie is so small that it won’t be enough to meet everyone’s needs, no matter how equally you slice it.

But large-scale global redistribution seems, unfortunately, very unlikely to happen anytime soon. After all, data shows that most wealthy countries aren’t even willing to spend 0.7 percent of their GDP on aid. So we shouldn’t hold our breath for them to agree to give up even bigger shares of their wealth. And while climate reparations to developing countries are a major topic at the ongoing COP27 climate summit, that topic is being carefully avoided by some richer countries like the US, which has failed to even make good on its earlier climate finance promises.

So, the hope is not that the poorest countries won’t grow. The hope is that they will grow and keep emissions down, and that before long they’ll feature on a new chart showing all the countries that have achieved decoupling.