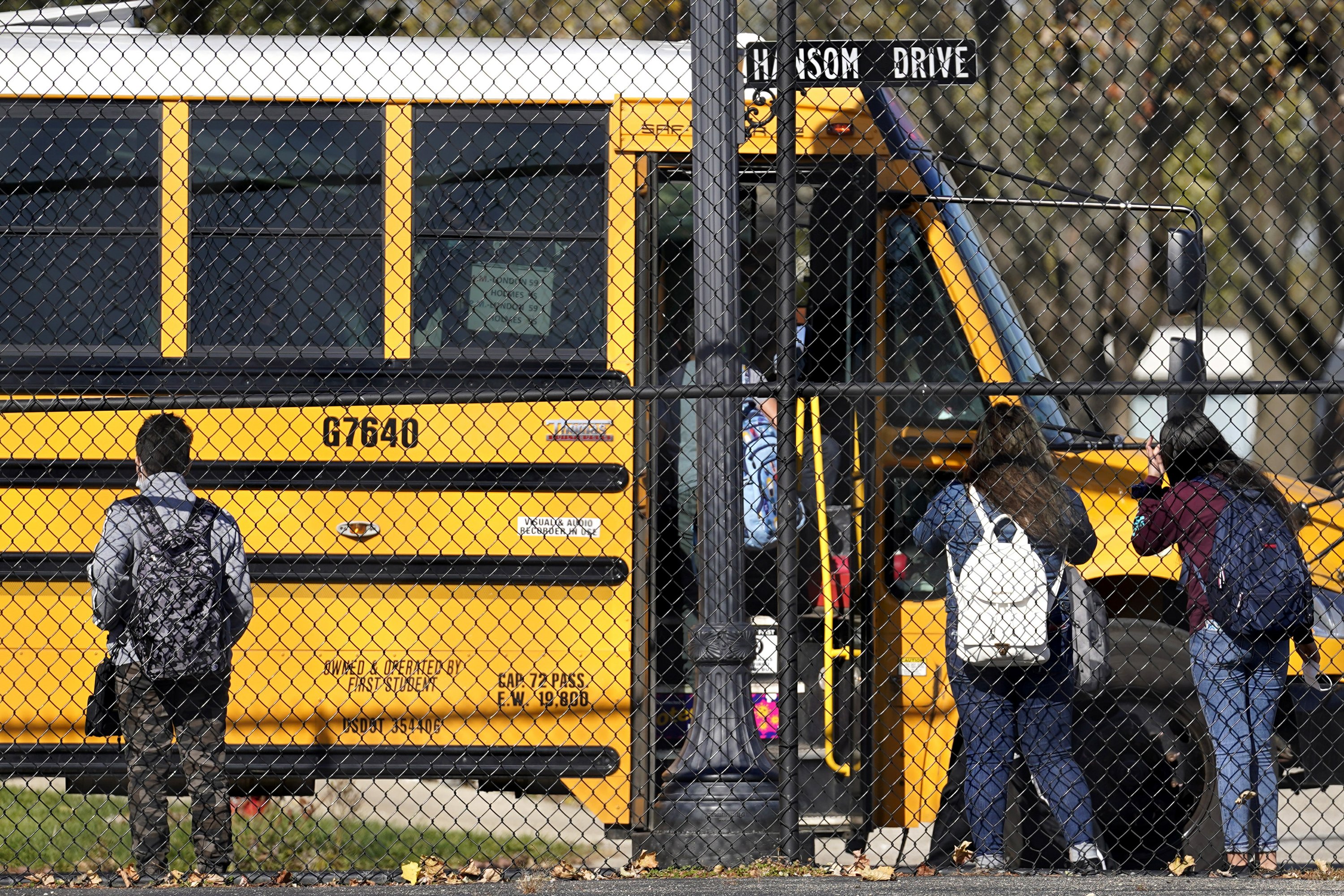 FILE - In this Friday, Nov. 6, 2020 file photo, students wait to board a school bus in Wheeling, Ill. With COVID-19 infections and hospitalizations spiking to record numbers across the U.S. and abroad, many school districts are temporarily shutting down in-person classes as holidays loom. (AP Photo/Nam Y. Huh)

FILE - In this Friday, Nov. 6, 2020 file photo, students wait to board a school bus in Wheeling, Ill. With COVID-19 infections and hospitalizations spiking to record numbers across the U.S. and abroad, many school districts are temporarily shutting down in-person classes as holidays loom. (AP Photo/Nam Y. Huh)

With COVID-19 cases and hospitalizations in the state spiking to record levels, bus drivers and teachers in quarantine, students getting sick and the holidays looming, Schools Superintendent Scott Hanback in Tippecanoe County, Indiana, made a tough decision this week.

The school system, he decreed, would switch to remote learning until after Thanksgiving.

It seemed like the only safe way to proceed after the myriad disruptions caused by the surging coronavirus.

’’It has been very, very difficult,” Hanback said, adding that he has been doing ‘’a lot of prayer, rest and trying to just take care of my mental health and physical health just so I can stay sharp.’’

Facing equally grim conditions, school systems around the U.S. and abroad are taking similarly tough action. Boston, Detroit, Indianapolis and Philadelphia are among those that are closing classrooms or abandoning plans to offer in-person classes later in the school year, and New York City may be next.

Such decisions are complicated by a host of conflicting concerns — namely, safety versus the potential educational and economic damage from schooling children at home, in front of computers, under their parents’ supervision.

The virus does not appear to be rampant within schools themselves. Instead, many of the infections that are proving so disruptive are believed to be occurring out in the community. Educators fear things could get worse during upcoming holiday breaks, when students and staff gather with family and friends or travel to other hot spots.

The nation has entered “an extremely high-risk period,” said experts at PolicyLab, a Children’s Hospital of Philadelphia team that develops guidance. They shifted their advice this week, advocating online-only instruction for areas with rapidly rising rates, at least until after Thanksgiving.

Newly confirmed infections per day in the U.S. are shattering records at nearly every turn, hitting more than 153,000 on Thursday and pushing the running total in the U.S. to about 10.5 million, with about a quarter-million deaths, by Johns Hopkins University’s count. The number of people now in the hospital reached an all-time high of over 67,000 on Thursday, according to the COVID Tracking Project.

In Hanback’s district in Tippecanoe County, which includes the city of Lafayette, 51 cases out of 13,800 students were confirmed during the first nine weeks of in-person classes. In less than three weeks that followed, that number almost doubled, and cases among teachers and staff jumped fivefold, Hanback said.

Because of the resulting shortage of bus drivers, students were arriving at school an hour late and getting home an hour late, Hanback said.

‘’Inside the schools, the same thing was happening with classroom teachers and classroom aides,” he said. “We are exhausting our substitute pool and it became a daily struggle.’

Weekly reports by the American Academy of Pediatrics and the Children’s Hospital Association show there have been more than 900,000 COVID-19 cases in children and teens in the U.S., and they have been steadily rising. Almost 74,000 cases were recorded during the week ending Nov. 5, an all-time high.

Severe illness among children and teens is rare, particularly in younger ones, but they can often spread the disease without showing any symptoms. When schools are disrupted, it’s often because teachers, staff and other adult employees have gotten sick.

The academy has stressed the importance of in-person education but says uncontrolled spread in many areas means that cannot happen safely in many schools.

By some estimates, more than half of U.S. schools have been offering at least some in-person classes.

In New Mexico, where cases and hospitalizations are at record highs, Amy Armstrong and her husband face a dilemma. They have been sending their 7-year-old son, Damien, to school four days a week since September. But the district outside Albuquerque announced this week that classes will be online-only starting Monday.

Quitting their jobs to watch over their children — she’s a bank employee, he does electrical work — could mean losing their house.

Armstrong said she understands the rationale for shutting schools.

’’But do they understand the impact financially, emotionally and physically it’s having on people, on families, on the kids especially?” she said.

In Europe, most schools reopened to a degree in September, only to see the virus spike and hospitals start to fill with COVID-19 patients. Greece reluctantly closed all but elementary schools this month, while Italy kept high schools on a partial schedule.

France, which has suffered more infections than anywhere else in Europe, kept schools open even after closing restaurants, bars and all but essential stores. The number of children under 19 testing positive has dropped markedly since the semi-lockdown began on Oct. 29 but remains high.

Michael Hinojosa, schools superintendent in Dallas, has been watching and worrying as case numbers rise all around him. Texas surpassed 1 million cases this week.

Many of the district’s 150,000 students are from disadvantaged families, and about half attend at least some in-person classes. Switching to all-remote learning could mean a loss of state funding, Hinojosa said, but if schools reach a crisis point, “we have to be able to pivot on a dime.”

Five district schools had to revert to all-remote education briefly when cases were detected in students and staff. School numbers have been relatively low; just 2% of the district’s 22,000 teachers and staff have been infected, and the rate among students is well below that.

But Hinojosa fears that bubble could burst over the holidays.

“We are a very blue city in a purple county in a red state. The governor wants all restaurants open,” he said.

Detroit announced Thursday it will suspend in-person classes next week for the roughly 50,000 students because of the city’s rising infection rate.

For some kids, especially those from impoverished or dysfunctional families, schools are safer than being home. Some are falling behind with remote-only instruction.

That is the case at Indio High School, in California’s southern desert, said Principal Derrick Lawson.

Most students are from impoverished homes, and many have parents who are farmworkers, laboring in the date palm and produce fields. Others have jobless parents who worked in now-shuttered hotels and golf courses. Several have lost family members to COVID-19, he said.

Cases and deaths have been rising since summer in the county, where at least half the residents are Hispanic. The trend will need to reverse for schools to start offering in-person education in January, as hoped, Lawson said.

“Because we’re virtual, I’m not worried about an outbreak” among students and staff, Lawson said. “My big worry is we have so many kids who are experiencing loss or who are despondent.”

The school has set up links to counselors, a suicide prevention group, relaxation techniques and other services.

’’I’ve got some confused high school kids, looking at their world and wondering what is happening,” Lawson said.

The Associated Press Health and Science Department receives support from the Howard Hughes Medical Institute’s Department of Science Education. The AP is solely responsible for all content.