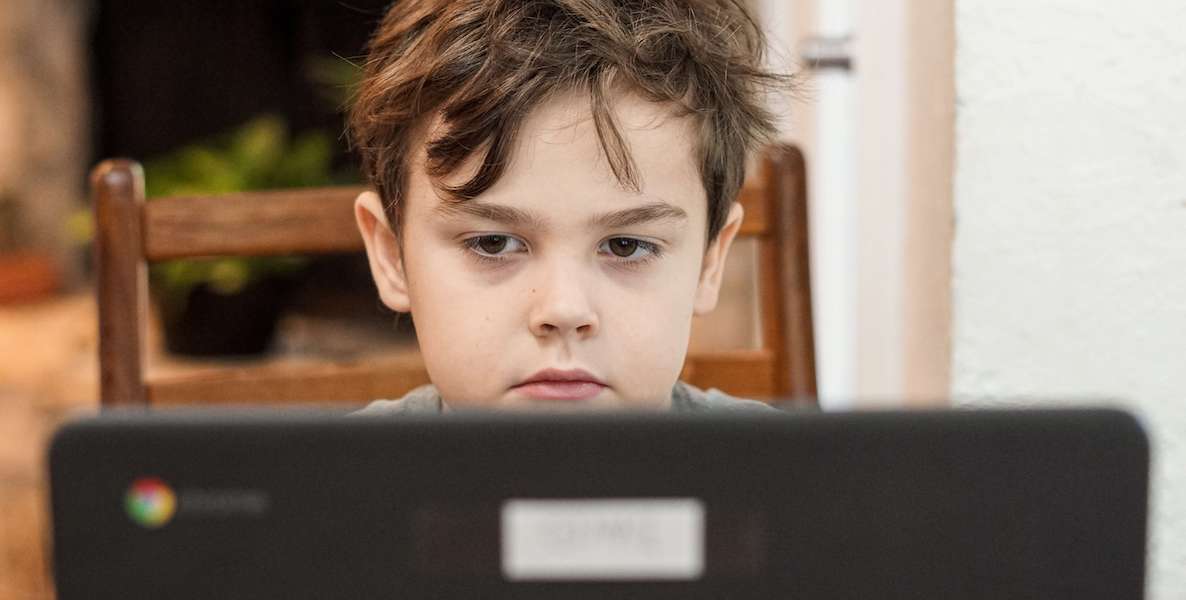 Prior to the pandemic, Naia, 10, loved going to school. Some days she and a group of mixed-age peers would head to a nearby park and spend hours having a picnic. Others, she and another 10-year-old friend would devote their day to exploring a hollowed-out tree they’d discovered off campus. There were days she’d choose to do art, others she’d spend time on the computer.

This year will be Naia’s seventh at Philly Free School (PFS), where kids direct their own learning, and have carte blanche over how to spend their time. Want to spend the afternoon roller-skating in the basement rink? Go for it, kid.

But with that power, as the Spider-Man cliché goes, comes great responsibility.

Philly Free School’s 54 students, who can range in age from 4 to 19, along with four adult staff, govern every aspect of school culture. Once a week, at school meetings that can last up to several hours, they cover a communally created agenda that explores issues from whether to ban microwave popcorn (too stinky when burned) to how to spend the school’s money and whom to hire.

There’s also a daily meeting of the JC, or judicial committee, in which the community doles out disciplinary measures for students who break the agreed-upon rules.

In all meetings, every single person at the school has one vote that counts equally. (Time limits for agenda items are pre-set by students, so that no single student can filibuster their idea by simply going on and on, and wearing down the group.)

“I can’t think of another place where kids actually get to practice advocacy,” says Philly Free School co-founder Mark Filippone, who was among the group of 12 visionaries who founded the school in 2011 to bring democratic education to the city. “You do that in a conventional school, and you’d probably get detention. But here we’re saying, Tell us what you think, give us your input, this is important.”

Philly Free School, where 54 percent of students are of color, is one of about 60 Democratic Schools in the world. The premise of such schools is that students are entrusted to run their individual learning, and the school community of which they are a part.

This is obviously not for everyone: You have to be a family that’s comfortable breaking away entirely from the current model of school, and prioritize personal measures of success more than empirical status or achievement markers like grades, awards, GPAs or admittance to only a handful of historically esteemed schools.

The school doesn’t even track SAT or ACT scores. There is a diploma process, for which interested students prepare a thesis paper “articulating their readiness to be a responsible member of the community at large,” though a diploma is not required to successfully complete the Philly Free School program.

All of that said, students report feeling challenged and happy—something they say many of their peers in traditional schools don’t—and many are grateful for the flexibility to get a head start on jobs, or the encouragement to reach out to any number of local professors or experts when they have a question about, say, engineering or poetry.

The four staff serve as guides, but are not teachers, per se. If you express an interest in engineering, sure, they’ll help you find ways to learn about it through books and local resources—exhibits, events, experts; but they won’t sit down with a classic curriculum or hand out assignments.

Other students say they end up happier in college because they have a better sense of who they are and how to pursue their intellectual interests independently.

At a time when, according to Brookings, 70 percent of 12th graders have never written a letter to give an opinion or solve a problem and 30 percent have never taken part in a debate, Philly Free School is practicing what is arguably the most important element of civics education: experiential learning.

Back in 1848, Horace Mann argued that “free, standardized, and universal schooling was essential to the grand American experiment of self-governance.” But the public schools Mann helped to create are now all but failing to turn out engaged citizens: There’s a correlation between low voter turnout among young adults, and the absence of or decrease in civics education. It was widely reported that in 2016, for example, only half of eligible voters between 18 and 29 actually voted.

Today, it’s thought that the essential elements of civics education include: instruction about the U.S. Constitution and Bill of Rights; the democratic system compared to other systems of government; avenues for public participation in a democracy; state and local voting rules; and the role of media in public debate.

According to the Center for American Progress (CAP), many states actually do check all of these boxes—yet the National Education Association reports that only 25 percent of U.S. students reach the “proficient” standard on the National Assessment of Educational Progress (NAEP).

All 50 states require some form of instruction in civics and nearly 90 percent of students take at least one civics class, yet factual book learning is rarely reinforced with experienced-based learning—the exact kind of learning Philly Free School students do every day.

And studies show a relationship between high-quality civic learning programs and increased civic engagement. Brookings cites the 2011 “Guardian of Democracy: The Civic Mission of Schools” report, which says that students who receive high-quality civic education are more likely to “understand public issues, view political engagement as a means of addressing communal challenges, and participate in civic activities.”

Naturally, programs have popped up to amplify efforts to teach civics: The nonprofits Generation Citizen and Teaching Tolerance, a program of Southern Poverty Law Center, are two such examples nationally; in Philly, there’s The Rendell Center for Civics and Civic Engagement, and of course the National Constitution Center regularly offers school programs. Yet none of them incorporate the idea of civics into every aspect of the school day.

This past spring, Naia and another 10-year-old spearheaded Philly Free School’s Building Design Committee, a group charged with designing the new building that the school, previously at 20th and Christian, will be moving into this fall at 49th and Springfield.

Theirs weren’t just cutesy titles: Naia and her peers had real power, leading committee meetings to decide, say, where walls should be, that there should be a game room, where the quiet reading rooms should go. Interestingly, the initial sketch students came up with for their grand vision looks a lot like the architect’s final, official rendering.

Philly Free School students also weighed in on guidelines for reopening this fall. Whereas Philly Free School’s adults were inclined to skip out on having families complete a Covid-19 waiver, students pushed for it.

“Students spoke up and [said] yes, we think parents need to understand that there’s a pandemic going on and they just need to sign the waiver. As staff, we were learning towards not implementing the waiver, but students spoke up and they had their opinions and we listened to those opinions,” explains Simon Eisenstein, another of the four adult staff at Philly Free School. Eisenstein has the unique experience of having attended a Democratic School for his entire educational career—The Circle School, in Harrisburg.

A big misconception about Democratic Schools, Eisenstein knows, is that “[Students] don’t really learn anything, they just play all day, or sit around doing nothing. Well no, they learn all the time just by practicing life. They’re always learning.”

And, yes, he adds: Everyone who wants to go to college does, and typically ends up at their first-choice school (one student was waitlisted at Brown): Philly Free School has had students attend Marlboro, Bard College at Simon’s Rock, Full Sail University, Simmons University, University of the Arts, Community College of Philadelphia, Hampshire College, as well as go off to trade school or to start their own business.

Naia remembers concerned relatives worrying, when she was 5, that she’d never learn to read at Philly Free School; a year later, she was happily diving into book one of the Harry Potter series.

But more than academics or college readiness, what Philly Free School prides itself on is its faith in youth.

“The key to this is trust,” says Filippone. “We don’t trust kids in our society, right? Broadly. Nobody trusts kids.” Especially teens, and Black teens in particular, he adds. “But what happens at PFS is that we’re saying we trust children.” That, he says, changes the way kids interact with themselves. “They see themselves as trustworthy, as competent, as having opinions that actually matter.”

The other crucial aspect of Philly Free School that prepares young people to be engaged citizens: Students of all ages are mixed together.

“Conventional school is really the only thing in our society where you’re categorized by your age,” Eisenstein points out. “That’s really not how society works other than that.”

Simon (not to be confused with PFS’s Simon), 17, the only 11th grader among the 22 students enrolled in the school, for example, was recently on a committee that hired new “staffulty,” a term Head of School Henry Fairfax prefers to status-loaded distinctions between staff or faculty. Simon also relishes Revolution’s approach to self-directed learning.

“We’re able to leave the school, go to places and actually explore the environment and how it feels and really is in the world, instead of just seeing it through a computer at school sitting behind a desk,” Simon says.

Revolution is also an independent school; this year, it is waiving tuition entirely, for all students (last year, tuition was on a sliding scale, maxing out at $35,000).

Tasneem, 17, another Revolution student, helped guide the school’s reopening plan for the fall: As the only student on the Scenario-Planning Committee, she was the single voice championing a more gradual return to in-person learning, on behalf of herself and her peers. Where adult leaders proposed starting with two days of in-person instruction, she cautioned against moving too quickly, and suggested just one to start; that’s the plan the school adopted.

“The student voice was the one that really resonated for us, because at the end of the day this is what we’re in it for. So that was a really, really awesome, awesome experience for everyone,” Fairfax says.

There’s no telling what any Philly student’s future holds, or how much they’ll remember about the Bill of Rights or the steps needed for a bill to become a law. But more than anything they could glean from a textbook, students at schools like Philly Free School will undoubtedly graduate with an appreciation for, and practice in, what are arguably the most meaningful aspects of citizenship in this country: thinking critically, debating effectively and valuing their vote.

Speaking of voting, it’s election season in Philly. Are you all set to fill out your ballot?