Learning in lockdown: 'The largest social experiment we've ever done' 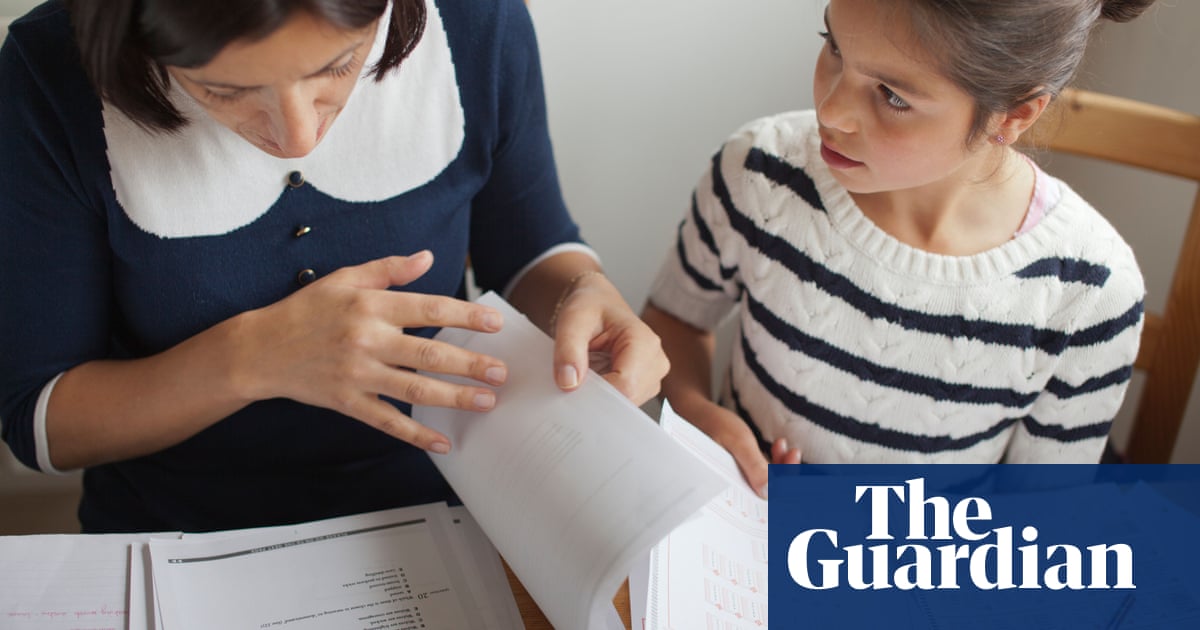 Does hitting the pause button on education mean there might be space to observe other ways of learning, and to reconsider what we value about schools?

“Can I have a break?” my grade 2 kid groans after completing his first remote learning task for the day. “That took a really long time.” I agree, and don’t resist when he runs away for possibly the sixth time. The maths task, requiring my child to draw a face on to a potato, roll it down a ramp and then measure its progress, took two minutes and 32 seconds. It is the most productive lesson of our primary school day. Welcome to remote learning in stage-four lockdown in Melbourne.

Victorian children have now been enduring remote schooling for about 17 weeks or almost two terms – virtually half of their 2020 school year. Earlier in the year, Naplan was abandoned, and for year 12 students in Victoria a “consideration of educational disadvantage” process will calculate final-year students’ ranking for university entry. For primary school kids, half-yearly reports were adjusted to reflect the emotional wellbeing of the student and report broadly on their progress, rather than stick to any attempt to assess as per normal. Expectations across the board have had to be tweaked, partly to prioritise wellbeing, and partly because it’s so difficult to assess kids remotely. So what are the lessons from learning in lockdown?

“One good outcome out of this [Covid-19 experience], the largest social experiment on children globally that we have ever done, including 1.6 billion children, would be that parents would begin to think about how teaching and learning should happen, and what it means to be prepared to learn, and how to learn,” says Pasi Sahlberg, professor of education policy at the Gonski Institute, UNSW Sydney.

Remote learning in its various forms across the world very quickly highlighted pre- existing problems such as the digital divide, and the vulnerability of disadvantaged kids (according to the Grattan Institute, the equity gap between advantaged and disadvantaged students grows at triple the rate during remote schooling.) But the Victorian case study is perhaps even more instructive due to the length of time it has dragged on for.

In some ways, the second go at this has been easier. Most Victorian schools applied the learning they were forced to undergo earlier in the year, the tech worked more smoothly, teachers became more comfortable in front of the camera and principals incorporated parent feedback. But, for many, fatigue has set in. Teachers are exhausted – one grade 4 teacher, fresh from taking a video of herself dressed as a superhero and hiding in a bush, described the feeling as being “emotionally and creatively tapped out”. Parents are very much over it: “I just screamed like a banshee in front of the entire Zoom class cause I thought it was on mute,” said one. And the kids? The kids are still in their pyjamas.

Many parents have given in to their kids’ fatigue, or at least relaxed their expectations a little. For some, rather than insisting on completing a normal school day, the aim is simply to make it to lunch time. Some primary schools have prioritised what’s dubbed “social and emotional learning” above rigorous assessment or an insistence on meeting work quotas. Proposed tasks for kids include building blanket cubbies, indoor scavenger hunts, nature bingo and meditation time for the whole family. Some parents have gone off on their own tangent. “We started building our own curriculum around things they are interested in,” said a Melbourne mother of a five-year-old and nine-year-old. “They prefer to read about, watch and play Star Wars. So let’s just call it ‘media studies’, ‘costume design’ and ‘light sabre skills’.” Other parents are leaving kids to work, or not work, because they simply have no choice – they’re too busy trying to hold down their jobs.

So does hitting the pause button mean there might be space to observe other ways of learning, and to reconsider what we value about schools? Is it a luxury to ask these questions, or absolutely crucial given the future that lies ahead for kids? One mother of nine-year-old and six-year-old girls in regional Victoria pledged that this lockdown she wasn’t going to “let the light go out in my children’s eyes. Education is about curiosity. It is about being inspired to support that sense of everlasting wonder. The last lockdown muted their desire to ask questions and they didn’t engage well with the format or content. Keeping that spark alight will set them up for life more than forcing them to complete tasks on a PDF and stressing their parents out.”

Many parents have learnt the hard way that the average attention span of a primary school child is two to three minutes per year of age. “Parents are learning a lot about how kids learn and how teachers teach their kids,” says one assistant principal. Hopefully “the understanding around curriculum will change for the better. There’s that greater understanding of how kids learn.”

Teachers and principals have also gained much more insight into the home life of kids. “We noticed our parents were really struggling at home at the halfway mark. Everyone was stressed, everyone had had enough,” says another assistant principal. “So we’ve emphasised injecting fun into the learning this time around – for morale, for families, for parents.”

A more relaxed approach to remote learning, or a uniform approach at all, isn’t consistent across primary schools, whether they be government, private or independent. One government school refused to issue a school report to a Grade 1 child who hadn’t attended enough Zoom classes. Another private school insisted on children wearing their uniforms every day and working on Zoom in front of teachers who were based at school in their classrooms.

But it is safe to say that many teachers, across schools, have experienced an incredibly steep learning curve. “Teachers have come through the largest and most rapid pedagogical change in the history of schooling,” says Peter Hutton, founder of the Future Schools Alliance, former principal of the innovative Templestowe College, and author of a recent petition to abandon Atar entirely this year. “This is the biggest single change that we’ve ever witnessed in 100 years, in the fastest time. What it shows when push comes to shove is that educators can change, we’ve demonstrated that they can.”

Another trend that seems consistent across schools is a marked attitude shift on the part of parents when it comes to how they see their kids’ teachers.

“The empathy for teachers hopefully is something that goes through the roof: we’ve had really positive feedback,” says the assistant principal. “The parents are seeing everything, and I think it’s been an experience that they’ve loved.”

Parents have also been reminded of the seemingly obvious but important role of schools as communities. “I miss the waves and the chats with parents in the morning,” says one father of a six-year-old and a 10-year-old. “I miss my daughter’s stories about her playground adventures. Her world has become smaller.”

And it seems concerns about the impact of children’s ever shrinking worlds unite teachers and parents across the board.

A national survey of more than 1,200 teachers’ experiences during Australia’s first wave of remote learning conducted by academics at Melbourne University found that 58% of teachers were concerned about students’ social development and 68% of primary school teachers felt remote learning was having a negative impact on students’ emotional wellbeing.

It’s for this reason that some schools and experts are warning against a “catch-up” mentality.

“Whatever the length of this crisis it will always be a good idea to prioritise children’s mental health and wellbeing, because kids can only learn if they are healthy and happy,” says Sahlberg. “If schools and parents are pushing children too hard to catch up and try to behave like the pandemic never existed, it could be very harmful.”

“Our message has to be ‘your kid has not fallen behind’, it has to be about wellbeing,” agrees another principal. “That has to be the messaging state wide.”

So what does it look like in NSW, now kids have been back in the classroom for months? “Teachers are talking more with their students about mental health and social and emotional wellbeing in the wake of lockdown 1,” says Julie Sonneman, education fellow at the Grattan Institute. “The teachers’ role in that has become bigger and they’ve risen to the need.”

So far the Victorian government has committed funds to targeted mental health measures, including rolling out the Mental Health in Primary Schools pilot, which employs a mental health and wellbeing coordinator with teaching qualifications to build the capability of school staff to better identify and support students with mental health concerns.

But Sonneman says teachers need to “model those skillsets in their everyday teaching: their lessons, their language”. She says more professional development is needed in this area. “Teachers will often feel the social and emotional learning is intuitive but there’s a need for much more training in that area. Hopefully teachers are supported with more guidance about how we truly seriously develop these skills.”

Sahlberg suggests that schools should avoid traditional assessment altogether at first and instead focus on a “playful reconnection to their school. Rather than leave our children with the memories of this fearful global health crisis, we need something that will empower these kids and give them hope and connect them back to the people that they have been missing.”

Rather than a binary choice between social and emotional learning and assessment, some academics are pushing for new ways to assess, starting with reimagining the much maligned Naplan. Others, like Sonneman, argue that it’s possible for teachers to subtly assess kids without placing extra stress or pressure on them.

Given Victoria is still in Lockdown 2.0, there’s not exactly the appetite for an education revolution right now. “There is a level of exhaustion and understandably so. We need some kind of normality for the teachers to catch their breath,” says Hutton. “We have to allow kids to share their experiences, to debrief.”

The parent of the budding Star Wars scholars isn’t so worried about her kids falling behind, but she does wonder about their “social skills and the longer term impacts of willingness to engage in school at all”.

“It helps to think about what kids have learned in lockdown, things that they’ll remember for life,” says Sahlberg. A parent of three kids aged 13, 10 and seven agrees. “My kids have been doing things they normally don’t have time to do… Things like cooking meals, building Lego creations, teaching the dog tricks, turning cardboard boxes into robots, actually chatting to one another.”

As for the parent in regional Victoria, three weeks later she is a bit more pragmatic given she’s trying to keep her business alive, and a lot wearier. But she still values what she has discovered about her own children. “Their great learning, and our great learning, is that they can do more than we ever thought. I can see that resilience and fortitude that’s inside them now, in that ‘lost year of learning’, they’ve actually learned those skills.”