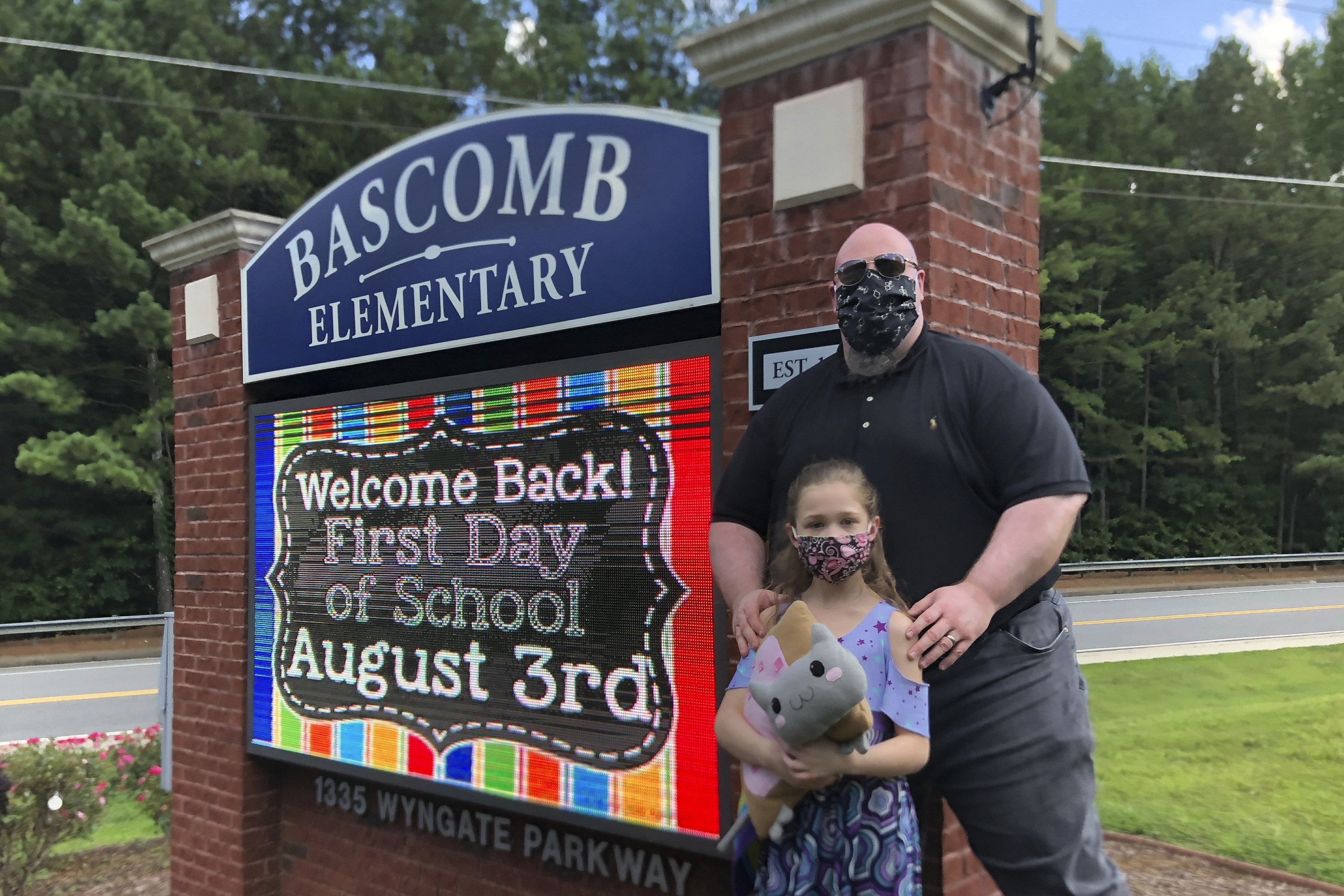 John Barrett and his daughter Autumn pose for photos outside Bascomb Elementary School in Woodstock, Ga., Thursday, July 23, 2020. Barrett says he will educate his daughter virtually and keep her out of in-person classes in Cherokee County schools, even though he's worried she will fall behind on her special education plans, because of concerns about COVID-19's spread. Cherokee County, near Atlanta, is one of many districts nationwide that gave parents a choice between in-person and all-online classes this fall. (AP Photo/Jeff Amy)

John Barrett and his daughter Autumn pose for photos outside Bascomb Elementary School in Woodstock, Ga., Thursday, July 23, 2020. Barrett says he will educate his daughter virtually and keep her out of in-person classes in Cherokee County schools, even though he's worried she will fall behind on her special education plans, because of concerns about COVID-19's spread. Cherokee County, near Atlanta, is one of many districts nationwide that gave parents a choice between in-person and all-online classes this fall. (AP Photo/Jeff Amy)

WOODSTOCK, Ga. (AP) — John Barrett plans to keep his daughter home from elementary school this year in suburban Atlanta, but he wishes she was going. Molly Ball is sending her teenage sons to school in the same district on Monday, but not without feelings of regret.

As the academic year begins in many places across the country this week, parents are faced with the difficult choice of whether to send their children to school or keep them home for remote learning because of the coronavirus pandemic. Many are unhappy with either option.

“I definitely think it’s healthy for a child to go back to school,” said Ball, who feels her sons, William and Henry, both at River Ridge High School in Georgia’s Cherokee County district, suffered through enough instability in the spring. “At the same time, I wish they weren’t going back to school right now. It’s very scary.”

Offering parents choices eases some of the problems facing schools. If some students stay home, that creates more space in buildings and on buses.

But the number of families with a choice has dwindled as the virus’s spread has prompted school districts to scrap in-person classes — at least to start the academic year — in cities including Los Angeles, Philadelphia and Washington, as well as parts of the South and Midwest where school is starting this week.

Many districts that don’t begin instruction until after Labor Day are warily tracking the virus — and weighing concerns of educators and parents — as they consider plans including hybrid approaches, with in-person learning at least a few days a week.

In Cherokee County, administrators have stuck with plans to offer in-person school five days a week despite pressure from some parents and teachers. The countywide district also rejected demands to require masks inside school buildings. The families of about 23% of Cherokee County’s 43,000 students have opted for them to learn remotely from home.

Barrett said the mask decision contributed to his decision to keep Autumn, who is in a special education program, home to start third grade at Bascomb Elementary School.

“At a minimum, there ought to be a mask mandate, and maybe a staggered schedule. They’re not interested in responding to the realities of the virus as it’s happening in Georgia,” Barrett said.

Barrett works from home and his wife, who has an educational background, isn’t employed. He says that gives them “an ability to bridge the gap.” But he worries that Autumn will still fall behind, especially on her individualized education program, the plan written for each special education student.

“She gives up a lot of the ability to make progress on her IEP,” Barrett said. “It’s a big decision, and it feels like a definite loss.”

Parents are not the only ones who are struggling. Districts that offer two modes of instruction create new challenges for teachers as well, especially those in smaller districts who are being asked to educate students in person and online at the same time.

Denise Dalrymple is reluctantly sending her two sons back to first and sixth grades in Cherokee County because she says it’s impossible for her to work otherwise. Like many districts, the county says it will have increased academic expectations for online learning this fall, compared to the spring.

“You basically have to make the student’s education time a priority over your own job,” Dalrymple said.

Others are more enthusiastic about a return.

“It was automatic because my husband and I both work, because it would have upset both of our schedules,” said Jackie Taylor, who has three school-aged children and lives in nearby Canton.

She said her children have been around other kids this summer, making the transition back to school less concerning.

“We use the neighborhood pool, we do the sports,” Taylor said as she watched her son practice baseball. “Obviously they’re in close proximity in the dugouts.”

Siana Onanovic said her son Kelvin will be attending Woodstock High, also in the Cherokee district, in person as a freshman. That’s in part because the special science and engineering curriculum that drew her family to the school’s attendance zone isn’t available online.

“There are so many pros and cons on each side,” she said.