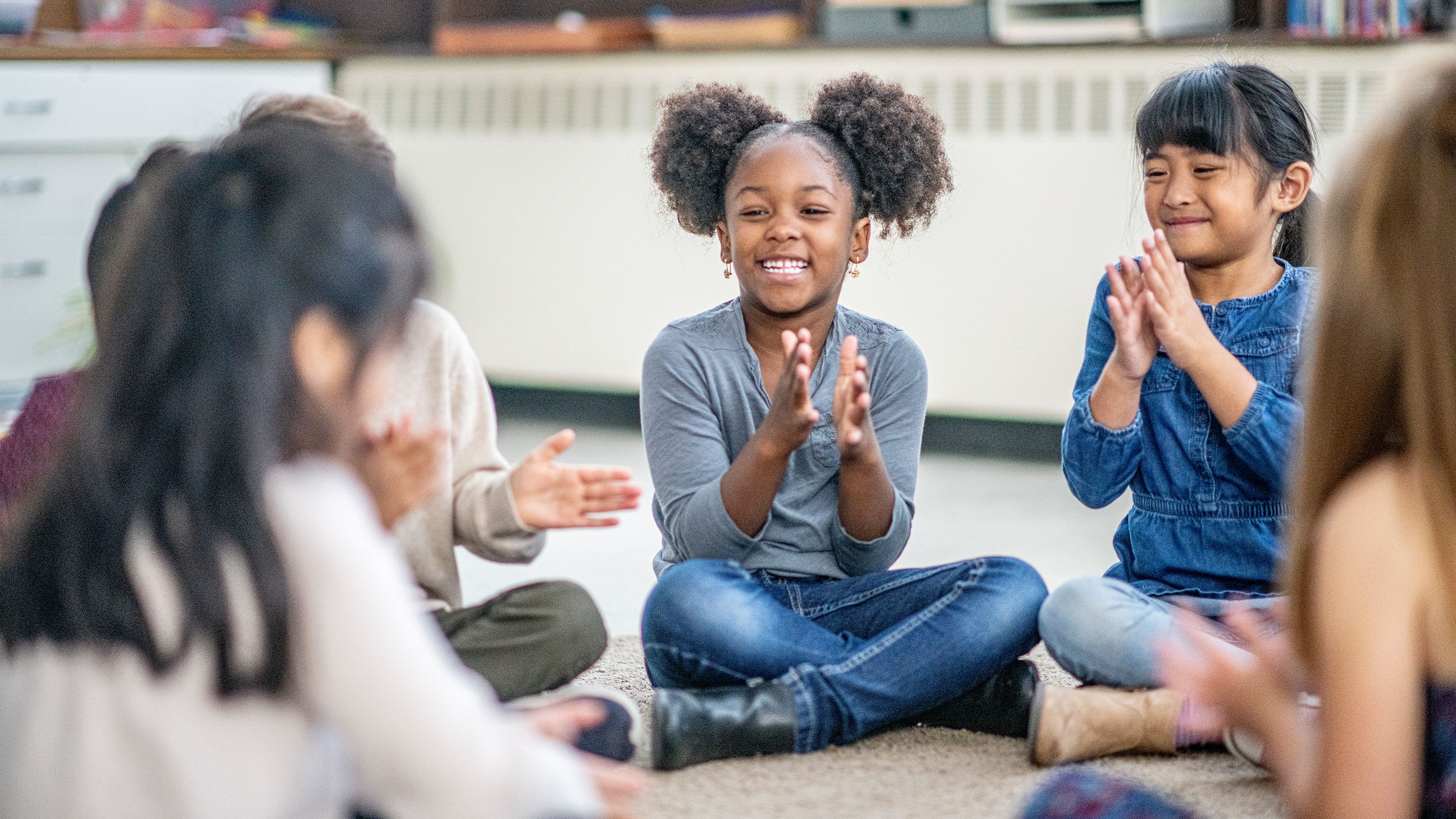 When teachers strategically integrate music into their instruction, it can be a robust and creative way to engage students and enrich content. Students are “entranced” by music from kindergarten through high school, in the words of teacher Larry Ferlazzo, who recently asked 10 educators how they brought music into their classrooms in a two-part series for Education Week. Using popular or compelling songs, melodies, or lyrics to scaffold academic lessons across the curriculum—from science to math, psychology, and history—is tapping into a powerful, and universal, human fascination with music.

It can also have a real impact on student outcomes. Decades of research has established that when students access more than one sensory system when engaging with new information—a process often called “multimodal learning”—they learn the materials more thoroughly. Linking related music or song to a primarily visual task, in other words, enhances learning by adding a rich auditory channel.

But music also primes the brain for a much broader range of important cognitive tasks. In 2016, researchers from the University of Washington, for example, concluded that young babies who listened intently to melodies became more sensitive to the rhythms of spoken language, and also improved their abilities to focus. And according to a 2019 study from Johns Hopkins University, when teachers use an arts-integrated approach to teaching science content for example, it was as effective—and in some cases better—than conventional teaching methods in helping students retain content.

Beyond academics, music can also alter the culture of a school for the better—sparking impromptu conversations among peers and between students and teachers, for example, or providing a calming respite from the stress of a packed school day. When teachers bring music into the school in even these simple ways, it can “impact our students’ emotions, motivation, attitudes, and sense of connection, yet we often fail to use it to our benefit,” says Alycia Owen, a teacher and instructional coach.

Here are six strategies for building music into your schedule, or directly into your instruction—no formal musical training required.

When middle-school math teacher Dennis Griffin Jr. wanted his students to demonstrate their math learning in a cumulative assessment, he assigned a music project.

Working alone or in groups, students could select an instrumental track of their choosing, and then write lyrics to accompany it that would weave in 10 to 12 math vocabulary words from that year’s lessons. The final product was a performance in front of classmates. “To this day, when I run into my former students, they often ask me if I still have the recordings of their songs,” writes Griffin Jr., now principal of Brown Deer Elementary School in Wisconsin. “I am always amazed because they are still able to recite their songs to me after more than 10 years.” The process of conceiving and writing song lyrics, and then performing them in front of a supportive audience of peers, assured that these important math concepts took hold in a lasting way.

Music can bring life to subjects like history and psychology, writes Denise Fawcett Facey, a teacher and author of The Social Studies Helper. In a U.S. history class, for example, she notes that “music can evoke the emotions, sensibilities, values, and social issues of a past time, fostering discussions and providing insight into that society.” Playing songs used by Harriet Tubman as code to communicate with escaping slaves can help kids think about and discuss “the ways music was so integrated into daily slave life as to make it unobtrusive to slave owners when used as code.” Asking students to decipher the code hidden in the lyrics—Fawcett Facey mentions songs such as Steal Away, Wade in the Water, and Sweet Chariot—helps to engage kids in the history content.

One high school history teacher, writes former teacher Jen Schwanke, a principal in Dublin, Ohio, reimagined popular songs as primary historical documents—she notes there are hundreds of songs that work for this type of unit, from John Denver’s Trail of Tears to Led Zeppelin’s When the Levee Broke—and asked her students to “deconstruct the lyrics and message of particular songs and offer a historical perspective behind the words.”

In Schwanke’s English classroom, music played a central role. “I loved showing students how music and lyrics personify our use of language—reading, writing, listening, storytelling, and understanding the experiences of others,” writes Schwanke. “I used song to teach all sorts of concepts from my standards, including [literary] conventions, figures of speech, connotation, climax, rhyme, and genre.”

To help her students gain a deeper understanding of “style, tone, and purpose,” for example, Schwanke frequently turned to poems and songs. “We talked about how a poem can contain all the elements of a traditional story and how our own interpretation—our relationship and connection to the piece—can sometimes come easier from a song than it does in a traditional story or poem.”

When some of her students felt nervous about crafting their own poems, Schwanke says assigning song-writing exercises to start broke the ice. “Students were often afraid to write a stand-alone poem, but fear disappeared when they told themselves they were writing a song,” she says. “It was a simple mind trick that flipped their internal narrative: ‘I can be a songwriter.’ Many of them soared, writing with eager rhythm and melody, and it carried them to places they hadn’t expected.”

Consider examining the mood of a poem, or topic you are studying, by asking students to find their own music that matches that mood. For a unit on Edgar Allen Poe, for example, Thriller by Michael Jackson “creates a fun energy with a hint of the macabre,” writes Owen, the instructional coach. For a lesson about oceans, she suggests Under the Sea by Samuel Wright, which is “light and lively, and students of all ages will likely be able to sing along.”

Use music, Owen suggests, to highlight a point in history, creating “a more immersive classroom experience that’s reflective of the time period in which the lesson content is set,” she writes. For example, Irving Berlin’s Puttin’ on the Ritz when students are reading The Great Gatsby.

Music can be uniquely powerful for teaching concepts such as sensation and perception, writes Fawcett Facey, or to illustrate the properties of sound—frequency, amplitude, complexity. “Something as basic as playing a variety of music genres underscores that the same sensation (hearing), produces differing, even opposing, perceptions of what is heard,” she notes.

At the American International School of Guangzhou in China, students and staff know it’s time for first period when music pipes through the school’s PA system. Songs are selected by teachers and students, making the “eclectic playlist” a “community ritual that is both useful and entertaining” as well as a “true reflection and celebration of our school’s diversity,” writes Owen, the instructional coach and chair of the school’s EAL department.

In the elementary classroom, musical prompts can be used to get students’ attention and signal transition times. “Clapping a rhythm pattern that children imitate; using music signals for other recurring actions—[striking] a triangle for lunchtime, a melodic pattern on tone bars for the end of silent reading,” write the authors of Music for Elementary Classroom Teachers.

To signal to her kindergarten students that the school day is coming to an end, teacher Sara Lev likes to play a goodbye song. It’s just one way she likes to infuse music into her students’ day—she’s also a fan of playing music for movement breaks, and using music for transitional cues—but it’s an effective technique that she uses to help her students transition out of school mode and into the the rest of their day.

Inquiring about students’ musical taste is a great way to get to know them, says Owen, who tucks in a question about students’ favorite songs—mixed in with other questions about their interests—in the first days of class. This “provides a platform for everything from future casual conversations to insights about what resources to use for a future lesson,” Owen writes.

Music can be both a conversation starter and relationship building tool, says Rachelle Dene Poth, a high school Spanish and STEM teacher in Pittsburgh. She likes to create a playlist, mixing both her own and students’ picks, a practice she’s found can “draw in students passing by in the hallway, give you a chance to meet more students, and you can usually see their mood change, a smile, and just a little more pep in their step when they walk by and hear the music.” It’s also an easy way to connect with kids and deepen relationships: “You find out a lot about what you have in common and what students are interested in that you can take a few minutes to invest in.”