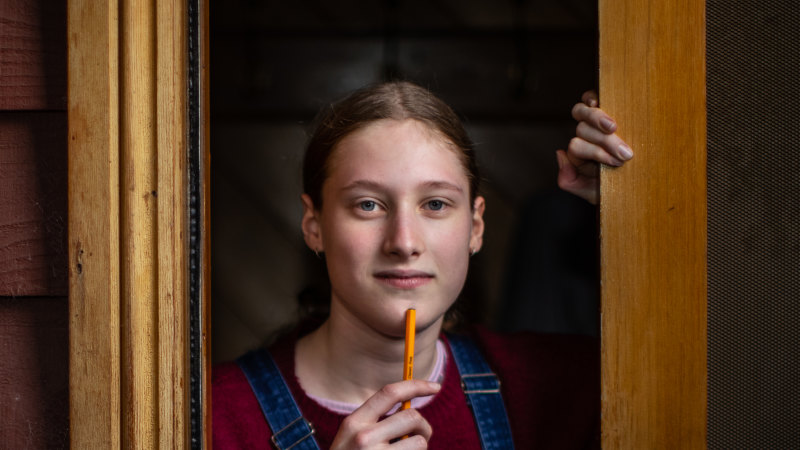 Poppy is in year 10 at Scoresby Secondary College in Melbourne’s east, but is studying two year 11 subjects, meaning she will attend school for those subjects from May 26, and continue to take her other subjects remotely. Most students between grade 3 and year 10 are not due to go back to class until June 9. Her mother, Leanne Powell, hopes the two-week transition period will help Poppy come to terms with being back in class, but isn’t certain it will. “She doesn’t have a lot of tolerance for normal teenage behaviour; people calling out or wanting to ask questions about something that has already been covered,” Ms Powell says.

“The normal kind of teenage stuff doesn’t work very well for her.” Remote learning, on the other hand, has worked beautifully for Poppy, who has loaded up on extension work after completing the standard work much quicker than she would have at school. “I think it’s been fantastic for her, she’s really thrived being able to work through things at her own pace, not having to be distracted by other kids,” her mother says. Principals at Victorian schools say many students who don’t like the school environment have thrived this term, in an unexpected benefit of the enforced decision to send them home. Scoresby Secondary College executive principal Gail Major says some students who have poor attendance records due to issues such as family trauma or violence, which “makes it very difficult to come to school”, have connected more strongly with the school while learning remotely.

She hopes the revelation will lead to lasting change in how these students are taught. “We can’t go back totally to not taking into consideration the feedback we’ve had on this,” Ms Major says. Emily Berger, a lecturer in educational psychology at Monash University, says there have always been “school refusers” who withdraw from school due to anxiety or difficulties with learning. While most students will embrace the return to classes in coming weeks, others will struggle with the return, which will need to be managed sensitively, Dr Berger says. “Students who have anxiety or have school refusal, they will be more reluctant than they are typically to then go back to school,” she says. “So the response of schools and parents to try to get them back is going to be really important.”

Parents should project confidence that school is the right place to be, and teachers should equally project confidence in the child’s capacity to attend school, Dr Berger says. At Caroline Chisholm Catholic College in Braybrook in Melbourne’s west, about 50 students have been learning remotely while on campus, sometimes because they are at risk at home. Principal Marco DiCesare says he has been fascinated by the improved way some of those students had applied themselves to their lessons. “Our vulnerable kids, the ones on-site, we are finding they’re doing a lot more work than they would if they were in a normal classroom,” Mr DiCesare says.

He puts much of it down to the absence of distraction and the lack of peer pressure. The school’s teachers are looking at how they can bottle the best aspects of remote learning, Mr DiCesare says. “My hope is that we don’t go back to the way things were, that we actually use this as a way of moving to the future with a new approach."