How many of us are making the grade as home educators? 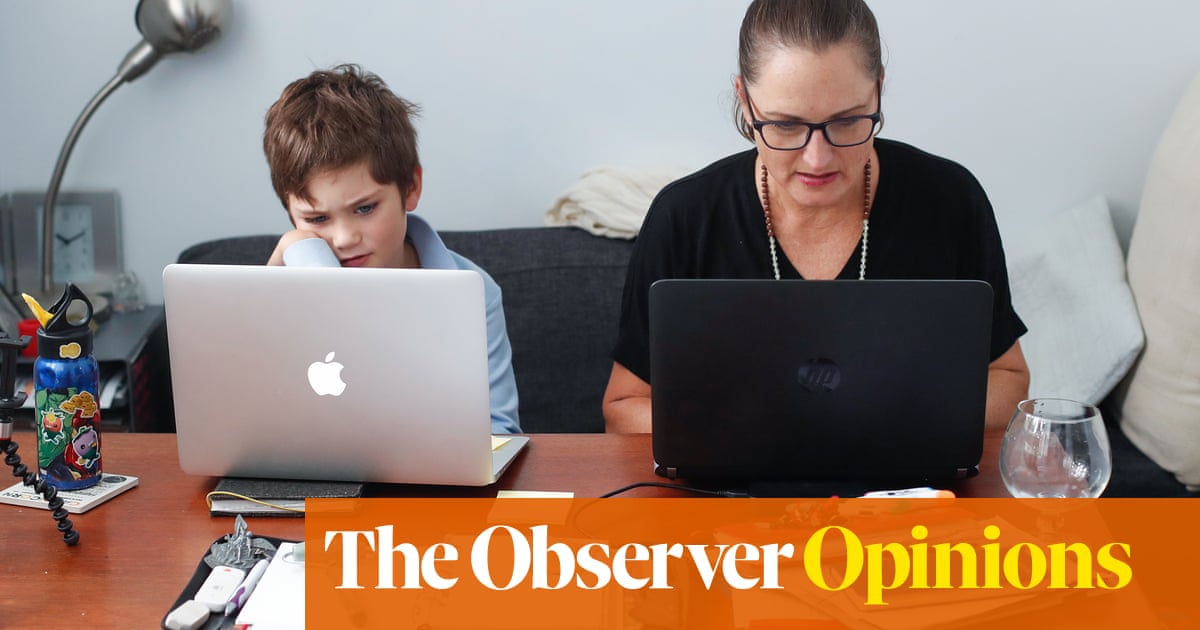 How many of us are making the grade as home educators?
It’s been a challenging time for students – and their parents, too. Here’s what we’ve learnt so far…
Sun 3 May 2020 03.00 EDT
Share via Email
‘Yes there are challenges, but we are ready to meet them’: let the lessons begin. Photograph: Brendon Thorne/Getty Images
Online school has started again. Joyous day! My fresh-faced poppets are keen, ready for their young minds to be moulded and expanded. Yes there are challenges, but we are ready to meet them. The world is a great big classroom! “Mummy,” they say, eagerly, big eyes bright with excitement, textbooks piled neatly in front of them. “We just want to learn.”
Of course they say nothing of the sort: the younger doesn’t say anything. He keeps himself to a strict 20 words per parent per day regime in normal times and has maintained that discipline now. I don’t actually know where the elder is. Maybe he’s trying to stream Ozark next to the rock that gets a weak 4G signal, or waging war on the slugs devouring his seedlings? We’ve all become adept at keeping out of each other’s way over the past six weeks – ships that pass in the kitchen.
They are both in exam years and the confusing government guidance gives few clues about how to approach this weird time. It’s too late to raise your grade, or perhaps it isn’t? You might want to retake anyway, so keep working. They should have been on study leave, which would have been a colour-coded, index card-strewn stress-fest, but this shapelessness is worse, I think, because there’s no clear end point. “All of the boredom of school holidays, without any of the actual holidays,” says a friend.
'Mummy' they say eagerly, big eyes bright with excitement, 'we just want to learn'
There is help out there. The headline that Danny Dyer is teaching Tudor history to tinies on the BBC is enormously pleasing (I might watch myself), but he’s just a small part of a learning-support package that gives the glib “public service broadcasting” label real meaning. Apparently, there’s content for GCSE and A-level students on BBC4 in the evenings, but nobody seems keen. If we manage a question apiece on University Challenge, that passes for education.
There are other things I am grateful for, including not being on the other side of the screen for a start. Imagine being a teacher now, trying to educate 25 boredom-maddened and anxious teenagers online. I find a 15-minute Skype call draining. Worse still, imagine trying to conjure grades that will have a real impact on young people’s future from some hastily assembled flat-pack assessment system. Reports that schools have been bombarded by pleas from parents trying to wangle better grades for their darlings only make it more unenviable.
I’m grateful, too, that given their ages, I’m not expected to facilitate my children’s learning – a mercy for both them and me. That doesn’t stop me offering the odd helpful suggestion. I forward all the “I saw Goody Proctor in the non-essentials aisle of Asda” memes I spot to the younger, who is studying The Crucible. My daily walk brings fresh learning material. “There’s a dead buzzard in the field!” I announce on my return. “Perhaps we could bring it home and you could dissect it?”
“I don’t think so,” says the elder. He is also damning of my suggestion that he “make yeast”, gesturing bleakly at the admittedly unpromising contents of the kitchen. A friend is enjoying online life drawing, so I suggest it as a complement to trying to paint with the three cans of ancient emulsion he unearthed. He’s not keen.
The first week, inevitably, the internet goes down. We stand around the router, trying various voodoo methods that have had success in the past. Eventually it wheezes back to life just as I’m casting around for a goat to sacrifice. Too late for chemistry, apparently. “I saw the teacher on screen for a second,” says the elder. He’s still in pyjamas, making an elaborate breakfast comprising 90% of our remaining food stocks. “Then it died.”
Even with the internet back, we’re constantly squabbling for bandwidth as I work and they try to study (the younger – also in pyjamas – trudges in wordlessly to show me the confusing mess on his screen). My husband doesn’t have much work, which means he is de facto technical support, a thankless task. It’s tense, so for light relief we read the school’s email about PE during lockdown, laugh heartily and delete it (sorry, school).
We’re all just making the best of a bad job, I suppose. A home-educating mate reminds me this is light years away from what she does in normal circumstances. How little home ed is confined to the home and how incompatible an education system based on learning outcomes and assessment is with millions of confused and anxious kids and parents thrown back on their own scant resources. That doesn’t mean this time can’t be educational, in the wider sense. We’ll all have learned something by the time it’s over: pest control, buzzard decomposition, the intimate workings of the home hub and the Succession theme tune on the piano respectively.
Maybe we’ll eventually learn patience, acceptance and a sense that there’s more to life than grades? Whatever pandemic key stage learning outcome that is, we’re not quite there yet.
Follow Emma on Twitter @BelgianWaffling
Topics