A Little Paint Can Change a Community's Relationship to Its Streets 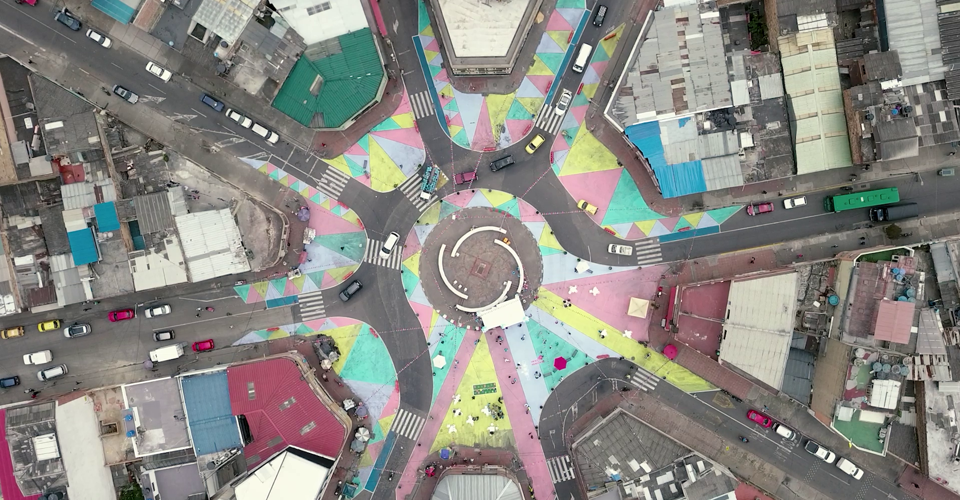 If you’re frustrated with the slow speed of efforts to make streets safer, perhaps you should grab a paint brush. During New York City Mayor Michael Bloomberg’s administration, the city reclaimed 180 acres of road space, creating 60 park plazas in large part by rerouting traffic and simply painting the surface of the road. The effort transformed many city streets from something other than the “sea of gray” that urban corridors tend to be. “Reclaiming these streets gave us a huge canvas for vibrant art and safe-street designs,” Janette Sadik-Khan, Bloomberg’s transportation commissioner, said at the CityLab DC conference on Monday. “But these projects are more than eye candy. They can deliver significant safety benefits for pennies on the dollar.”

Now Sadik-Khan and Bloomberg want to help more cities—especially small and mid-size cities—do the same thing. Bloomberg Associates, in collaboration with Street Plans Collaborative, announced the Asphalt Art Initiative on Monday in an effort to spur more roadway and pedestrian interventions on a blacktop canvas. Along with the new street guide, Bloomberg announced a competition: Ten small and mid-sized American cities can receive up to $25,000 each to implement their own arts-driven transportation projects to be completed by the end of 2020. Cities with anywhere between 30,000 and 500,000 residents are eligible to apply. Applications are due Thursday, December 12, 2019.

“Blacktop can become a backdrop for new public spaces,” Sadik-Khan said. Colorful designs can have traffic-calming effects on roadways, identify space for pedestrians, or even simply make underpasses and road barriers less of an eyesore. Projects like this can also be an avenue for community engagement within a changing city. “We used Paint the Town not just to enhance safety and aesthetics, but to do what we call place keeping,” Oakland Mayor Libby Schaaf said at the event. “Place keeping is much different than place making. Place keeping is about engaging the people that already live in a space and allowing them to preserve the stories, the culture.”

Last year, for example, OakDOT partnered with the East Bay Asian Local Development Corporation, one of the city’s largest affordable housing developers, as part of revitalization efforts near West Oakland’s historic California Hotel. “Roads are usually the most negative engagement that you have with your government, and so it has been wonderful to transform that into positivity.” A painting project played an important role in signaling that change was coming to the once derelict hotel and the area around it that was dominated by a freeway. The murals depicted piano keys, musical notes, and a hall of fame that lists performers like Ella Fitzgerald and Ray Charles, who came to one of the first venues to welcome African Americans in Oakland. With new ground-floor uses to the hotel’s former music venue, the painting signaled that music and business were coming back to the corridor.

Asphalt art can also be personal for the people painting it. They can commemorate lives lost to road violence or other tragedies. Schaaf told a story about how street art became a way to memorialize one of the co-founders of Oakland’s Scraper Bike Team, who was killed by a stray bullet. “This was their way to grieve and memorialize their friend,” she said. Cities are changing fast. Keep up with the CityLab Daily newsletter. The best way to follow issues you care about. Tony Garcia, a designer at Street Plans, said asphalt art provides a new outlet for regular street activists to push for change. “I think people are hungry for another way of being involved that is not going to council or voting or writing letters,” Garcia said. While an effort to permanently make dramatic changes to a street can provoke pushback, the temporary paint installations can be a conversation starter for the community. Garcia helped design a temporary street design at Coxe Avenue in Asheville, North Carolina. He said one woman in the area initially resisted the project. “She’s yelling at us, ‘I know what you people are doing. You’re defacing the street. This is graffiti. I’m gonna call the police,’” he said. But then she started asking more questions out of curiosity, and Garcia explained how the street painting would mark the street festivals that happen there. “When we started doing some of the butterflies, she was the biggest advocate.” She asked if the installation was going to be permanent or expand to more streets, which Garcia said shows the success of these temporary street-tattooing projects. “I said, ‘If you really like this, call your mayor and say that you support it.’ That change is what we’re looking for.” He said other asphalt art projects have also been delivering slower speeds from cars.

Unconventional crosswalks are opening up a gray area for local transportation planning, as the Federal Highway Administration has been asking cities like Ames, Iowa, to remove the colorful street markings to comply with its strict federal safety guidelines. Asked about this, the Asphalt Art team recommended cities take a “don’t ask for permission, ask for forgiveness” approach. “A lot of times nobody’s paying really a whole lot of attention,” Sadik-Khan said. “There’s been no data that shows that colored crosswalks are any more dangerous. The fact that we have 40,000 people dying on streets of this nation every year should probably be the focus.” By painting a street, people may begin to feel safer and also begin to interact with their roads and their city in a new way.

“Generally, people do not have a joyous relationship with their roads,” Schaaf said. “It’s where they hit potholes. It’s where they get parking tickets. Roads are usually the most negative engagement that you have with your government, and so it has been wonderful to transform that into positivity.” Hiring local, less professional artists provided another opportunity, too. “I was worried it might look kind of janky,” Schaaf said. “But you actually get tremendous beauty when you trust your community.”