How school attendance can help track child abuse during the pandemic 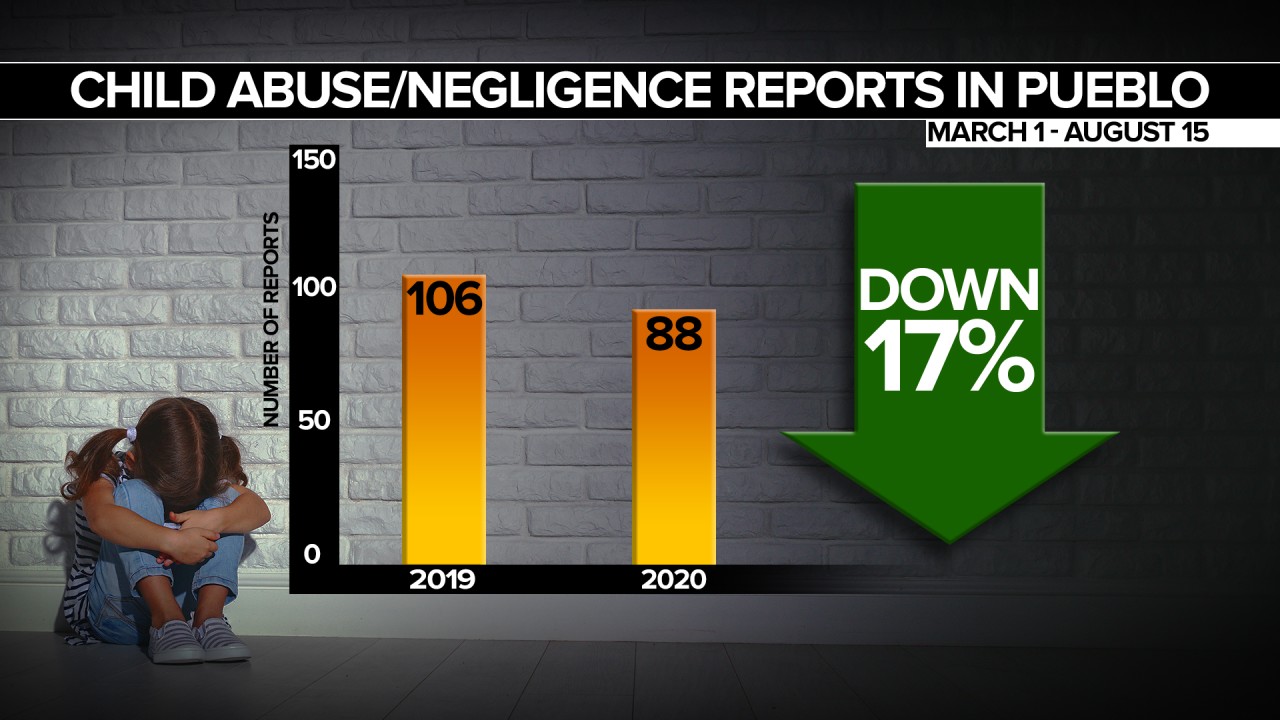 SOUTHERN COLORADO — Schools across the state are either back in session, or are preparing for their fall semester to begin soon. While choices between in-person and remote learning vary, there are concerns reaching beyond coronavirus about getting safely back to school.

Teachers are mandatory reporters, meaning they must report anything they suspect is child abuse and neglect. Typically, the number of calls regarding abuse and negligence decreases in the summer months, when teachers are not regularly interacting with students.

"Especially at the elementary level, sometimes they just talk to you, and sometimes they'll say things that are concerning. And so, when schools are shut down and you don't have as much frequent contact with them, you don't hear any of those stories, you don't see any physical signs, and so as a teacher we're definitely concerned about their welfare and their well-being... Those cases aren't being seen, and therefore, unreported," said Jessica Weckx, a fifth grade teacher at Corwin International Magnet School in Pueblo School District 60.

Weckx said she has reported child abuse and neglect, which can be hard to do. "The first time was not an easy call... It's very gut-wrenching, because you know that there's probably an adult in their life that cares about them, and you wonder what that's going to do to the whole family dynamic, but you know that the best thing to do would be to put it on somebody's radar and have somebody intervene if they need to... What you're doing could potentially help a child or save their life," said Weckx.

Weckx has been thinking about one student in particular during this time, and cannot wait to see the child if they do cross paths this year at school. "I just wondered how the pandemic affected this kiddo's family and their well-being, and that whole household," said Weckx.

We asked the Pueblo Police Department for the numbers of child abuse and negligence reports they have received from March 1 - August 15 in both 2019 and 2020. They found a 17% decrease in the number of calls this year.

Pueblo County School District 70 will be starting their school year remotely, for at least the first four weeks. They will be keeping a close eye on student attendance, using a program called Schoology. Teachers will keep track of the time missed by a student, and if they have not heard from a student in a few days, the plan is to check on them. "Teachers have been told that if you start to see that there are some connection issues with students, let's reach out to them. It could be a technical issue, or there could be something a little more serious going on that would require some more investigation... We do want to keep track of our students. We want to make sure that we know where they're at and that they're safe," said Todd Seip, the public information officer for Pueblo County School District 70.

Plus, teachers are on the lookout for signs of abuse. "Our school psychologists have also been meeting with our staff virtually. They've done some Zoom training meetings with staff to kind of go through new procedures, that as you see students online as opposed to in the classrooms, what are some signs to look for," said Seip.

In El Paso County, the Department of Human Services said the requirements of mandatory reporters have not changed because of the new learning methods implemented due to the virus. "We would also encourage, if kids aren't attending, if there's just some sort of barrier to why kids can't attend, calling that in as well," said the Children, Youth, and Family Services Intake Manager, April Jenkins.

Jenkins did say the numbers for the Colorado Child Abuse and Neglect Reporting Hotline have decreased slightly this year, but that is a normal trend they see during the summer months.

CASA has been using virtual methods to continue helping the children they serve. Currently, there are around 1,000 kids who need a court appointed special advocate, and about 400 volunteers in the program. "Even though we didn't have mandatory reporters with eyes on kids, the abuse was still happening, unfortunately, behind those closed doors... We knew that we had to find a way to continue to bring on volunteers, and the more volunteers the better, because we have more kids now that are in trouble and need these services," said Rose.

The next informational session for CASA is on August 25, where people can learn more about what it takes to become a volunteer.

Regardless of a virtual or in-person platform, Weckx said teachers need to strive to make personal connections with their students to make them feel as safe as possible. "We won't be able to do anything in terms of academics or education, until we can make sure that these kids feel safe, not only just from the pandemic itself, but to feel safe again back in school, because sometimes school is their only safe place... We're going to try to pick up where we left off and try to just keep maintaining those relationships," said Weckx.

El Paso County DHS also told News5 the county has always done well in having a relatively high number of community reporters calling in suspected child abuse and neglect when compared with the rest of the state.