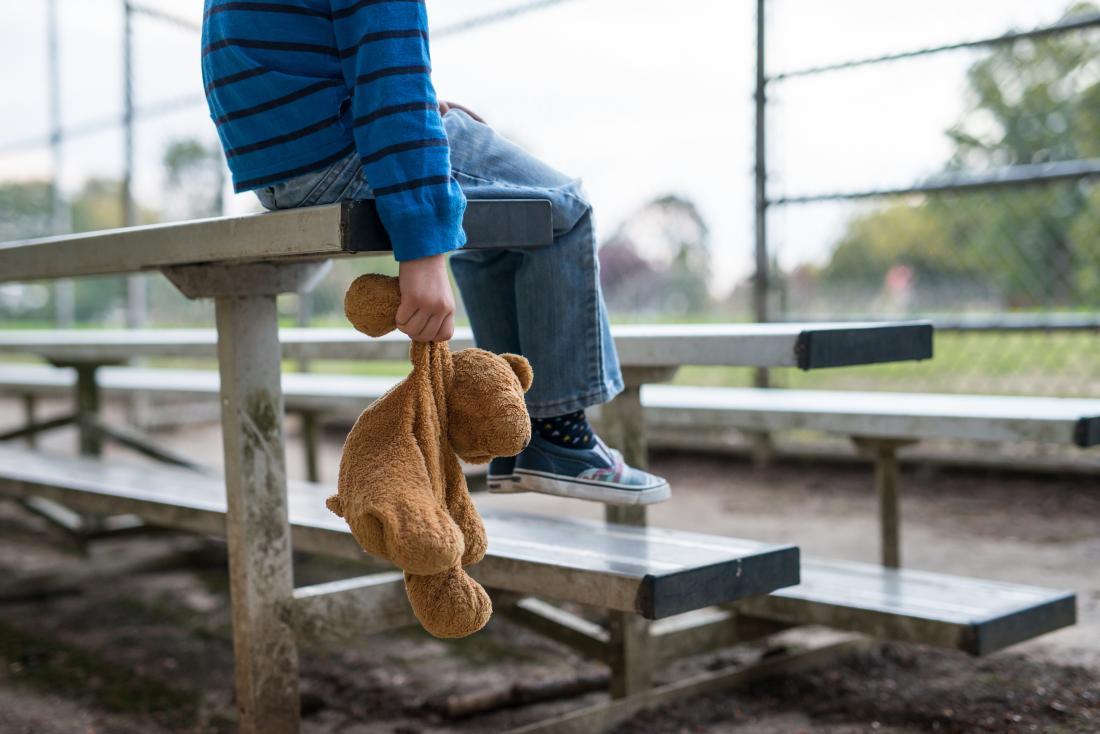 Child abuse refers to any emotional, sexual, or physical mistreatment or neglect by an adult in a role of responsibility toward someone who is under 18 years of age. It refers to any kind of action or failure to act that results in harm or possible harm for a child. The adult may be a parent or other family member or another caregiver, including sports coaches, teachers, and so on. The Centers for Disease Control and Prevention (CDC) classify the types of child abuse as physical abuse, sexual abuse, emotional abuse, or neglect. Abuse often involves one or more of these types. Bullying is not included in these categories, but it is a way of delivering different kinds of abuse. The action may or may not be violent. It can happen at home or elsewhere, and it occurs in all cultures, countries, and economic classes. It usually involves a family member or friend, rather than a stranger. It can also happen for a variety of reasons, for example, mental health problems affecting the person who delivers the abuse. This article looks at the types of abuse what they involve, and some signs to look out for. Four types of abuse are neglect and physical, emotional, and sexual abuse. In some countries, using corporal punishment is regarded as child abuse. Signs of abuse can be hard to detect, but being withdrawn, passive, and overly compliant may be an indication. The person who is carrying out the abuse may also need help, for example, a stressed parent.

Why is it important? Many children experience some kind of abuse as they are growing up. This can lead to feelings of fear and isolation. In the United States, child protective services (CPS) received 676,000 reports of individuals experiencing abuse or neglect in 2016. One study has suggested that 1 in 4 children experience some kind of neglect or abuse at some time. Child abuse is a serious problem that resulted in 1,750 child fatalities in the U.S. 2016. Observers may be unwilling to get involved when they are not sure or do not know the whole story. Sometimes, people are afraid to speak up because of the existing balance of power. The child may fear that the person who is abusing them is too important or powerful. They may also fear that they will not be believed. They may also feel ashamed, embarrassed, or worry that they are to blame. Abuse can be hard to spot. Some of the signs, such as bruising, can be part of normal growing up. Sometimes, the abuse results, in part, from problems that parents or caregivers face, which also need addressing. These could be financial pressure, unemployment, mental health problems, or substance abuse issues. They, too, may have experienced abuse as children. Speaking up about signs that something is wrong can help children, but it may also help their caregivers.

Intentionally hitting or otherwise physically harming a child is considered abuse, including, in many countries, for punishment. suffocating or drowning, for example, holding a child under water tying or forcing the child into a stressed position It can also involve fabricating a symptom or deliberately inducing illness in a child, as in Munchausen’s syndrome by proxy, now known as factitious disorder imposed on another (FDAI). In many countries, corporal punishment is increasingly seen as a form of physical child abuse. Indications that physical abuse may be occurring include the following, but it is important to note that these are not necessarily signs of abuse, and they can occur for other reasons. injuries that may reveal a pattern, for example, more than one burn or welts on the hand protesting or crying when it is time to go to a particular location, whether home or school, or another place where abuse might occur appearing to be frightened of a specific individual being watchful, as if expecting something unpleasant to happen wearing inappropriate clothing, for example, long sleeves in summer, to cover up injuries talking about being injured by a parent, caregiver, or other person If an adult is carrying out abuse, they may: appear overly severe and harsh when with the child behave in an unpredictable way with no clear boundaries or rules lash out in anger when the child does something wrong, instead of explaining use the fear of physical punishment rather than teaching rules, as a way to control a child’s behavior

Emotional abuse happens when people consistently say things and behave in a way that conveys to the child that they are inadequate, unloved, worthless, or only valued as far as the other person’s needs are concerned. This can have a profound, long-term impact on the child. not allowing children to express their views and opinions ridiculing what they say frequently shouting at or threatening them mocking the way they are or how they try to communicate telling them they are “no good” or “a mistake” preventing normal social interaction with peers and others ill-treating another person in front of the child for example, through domestic violence All types of maltreatment will include some level of emotional abuse, but it can also occur on its own. Some of these signs may indicate that a child is experiencing emotional abuse: showing extremes in behavior, for example, compliance, passivity, or aggressiveness lack of attachment to parent or caregiver

Sexual abuse is defined as any act that forces or entices a child or young person to participate in sexual activities. It is sexual abuse, even if the child does not understand what is happening and there is no force, violence, or even contact. If the child is forced or invited to participate in any activity that causes the other to be aroused, this is considered sexual abuse. assault by penetration, such as rape or oral sex non-penetrative sexual activities, such as touching outside of clothing, rubbing, kissing, and masturbating watching others performing sexual acts or getting a child to watch such acts looking at, showing, or sharing sexual images, videos, toys, or other material forcing or inviting a child to undress for sexual gratification “flashing” or showing one’s genitals to the child encouraging the child to behave in a way that is sexually inappropriate grooming, or preparing for future abuse or activity The person who carries out the abuse may be an adult male, adult female, or another child, usually a teenager who has already reached puberty, although younger children may also carry out abuse. Signs in the child that may indicate sexual abuse include: displaying sexual knowledge or behavior which is beyond their years, bizarre, or unusual withdrawing from friends and others wetting the bed after not doing so before changes in mood or appetite pregnancy or having a sexually transmitted disease (STD), especially before the age of 14 years Physical signs that may indicate sexual abuse include difficulty walking or sitting down. Sexual abuse usually involves someone the child knows. Often, the child will be told to keep the relationship a secret. They may be threatened with something bad happening if they tell anyone. An adult who carries out sexual abuse with a child may have received the same treatment in the past. Breaking the cycle may help prevent it passing down to the next generation.

The long-term effects of abuse include loneliness, isolation, and low self-esteem. Child neglect is when a parent or caregiver persistently fails to meet the basic physical and psychological needs of a child, resulting in impairment of the child’s health or development. not providing appropriate food, clothing, or medical care not providing adequate shelter, including abandoning a child or excluding them from the family home placing or leaving the child in a situation in which they might experience emotional or physical danger or harm leaving a child alone for a long time or so that they experience harm Neglecting or not responding to a child’s basic emotional needs could constitute neglect. If a parent or caregiver is behaving in a way that is neglectful, the child may: have medical or dental care needs that are not being met be using drugs or alcohol be missing food or money at unusual times, for example, for lunch or bus fare home wear the same clothes all the time or be consistently unsuitably dressed for the time of year need glasses but never have them say nobody looks after them at home Signs that a parent is neglecting a child include a lack of interest in the child’s progress and wellbeing, but the parent, too may be experiencing difficulties. They may need help, for example, with: not knowing a better way to take care of their children Single, teenage parents and those who experienced difficulties in their own childhood may struggle as parents. In some cases, identifying parents who need help and offering support and training can enable parents to avoid abuse in bringing up their children.

Children may express their experiences through drawings or play. An individual who suspects or believes a child is experiencing abuse should take action, for the child’s immediate and long-term safety. You do not need to be sure abuse is occurring or to know which type. In the long term, abuse can lead to problems with trust and relationship difficulties, a feeling of worthlessness, and difficulty regulating emotions. In some cases, the child may grow into an adult who abuses children in their care. If it is your own child, you should remove the child from the person’s presence, for example, by cancelling a babysitter temporarily or possibly permanently, if fears appear to be grounded. One sign that may indicate that abuse has taken place is children making drawings that represent their experience, or acting out what has happened to them in play. Researchers have said there is a lack of objective measures that can be used to confirm the use of drawings as evidence for use in a legal case. However, if a child draws unusual images, these may be worth attention, especially if there are other signs. It is worth noting that no two cases will be the same. The signs, too, may overlap. Aggressive behavior changes, for example, could be a sign of either physical or emotional abuse. In addition, other factors can trigger similar symptoms. The loss of a loved one, separation, or divorce, among other things, can also cause signs of emotional stress. Children who may have experienced abuse should visit a doctor or hospital, as physical medical help or counseling may be needed. Anyone who believes they are abusing, have abused, or might abuse a child should remove themselves from the child and place the child somewhere safe, for example, by asking someone else to look after them, then find someone to confide in. Counseling may be necessary. There are helplines available, and the local police or health services can help. Calls can be made anonymously. The appropriate people will take action to investigate. To report a suspected case of abuse, you can call 9-1-1 or this number: (1-800)4-A-CHILD or (1-800) 422-4453.