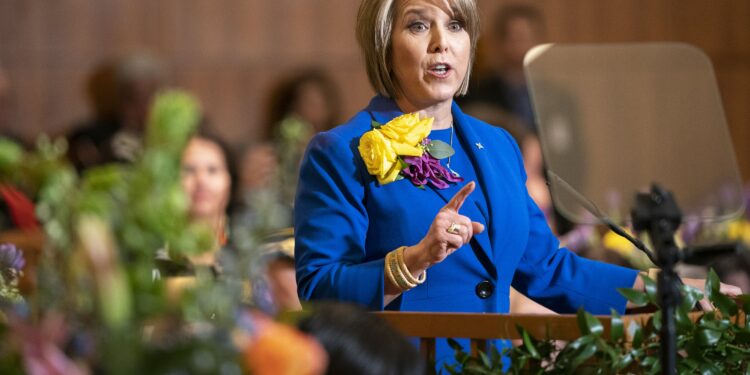 The first-term Democratic governor has until March 11 to decide the fate of scores of bills approved by the Democrat-led Legislature. She and her staff are still poring over a $7.6 billion general fund budget that could increase spending by nearly 8% for the fiscal year starting July 1.

Federal law already prohibits workplace discrimination based on pregnancy for employers of 15 or more workers. Signed legislation from Democratic Rep. Gail Chasey of Albuquerque and Sen. Liz Stefanics of Santa Fe extends the ban to businesses with as few as four employees.

The governor’s office says the bill allows women to ask employers for reasonable accommodations that might include time to express milk or more restroom breaks. Violations can be reported to the New Mexico Human Rights Commission.

The governor signed child welfare legislation that helps ensure academic credit for schoolwork by children who change schools because of a foster care placement or homelessness.

Greater financial support is slated for grandparents who are directly raising grandchildren and other kinship guardians, and for foster children as they move into early adulthood.

A bipartisan package of anti-crime legislation bumps up possible criminal penalties for possessing or brandishing a firearm in the commission of a felony.

Millions of dollar will be channeled toward the deployment of state police officers to reinforce local law enforcement agencies. The governor has dispatched state police to locations from Albuquerque to remote stretches of the U.S. border with Mexico since taking office at the start of 2019.

Additional money will be dedicated to training for school resources officers to learn techniques for diffusing confrontations without resorting to force.

New Legislation raises the cap on investments in local businesses by a multibillion dollar state endowment known as the Severance Tax Permanent Fund. Raising the cap to 11% from 9% could channel as much as $200 million toward in-state businesses, according to the governor’s office.