In-person child care did not increase COVID-19 risk for teachers, study says. What can we learn from that? 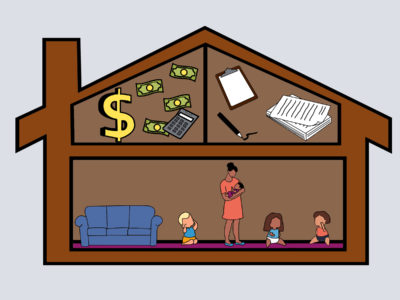 As K-12 school leaders across North Carolina consider when and how to serve students in-person safely, many child care directors have kept their doors open for the entire year.

“And they did it incredibly well with very little support,” said Walter Gilliam, the lead author of a study from Yale University that has found that in-person child care did not increase the risk that educators would contract COVID-19.

While public schools were closed early in the pandemic, many child care facilities stayed open to care for children of essential workers. Others reopened in the summer. And many are now caring for school-age children whose schools are operating again, but still fully or partially remote.

The national study, published in Pediatrics, the journal of the American Academy of Pediatrics, surveyed more than 57,000 child care educators during the first three months of the pandemic. It compared COVID-19 rates in educators who were providing in-person care and rates in those who were not.

“What we ultimately found was that the contact with children in child care did not increase their likelihood of getting COVID-19 above and beyond just being alive in their community,” Gilliam said. “So that doesn’t mean that people don’t get sick. It just means that the sickness increase can’t be attributed to child care. It’s other factors.”

Gilliam, director of the Edward Zigler Center in Child Development & Social Policy at Yale, said the findings could have something to do with lower likelihood of virus transmission among young children. Though some experts believe transmission is less likely in young children, we don’t know yet for sure. The Yale research is the first large-scale study of coronavirus transmission in child care facilities.

Gilliam said child care providers’ rigorous health and safety precautions are an important part of the context of the study.

“What we had here was not results that said that we can keep children and adults safe in a pandemic under normal circumstances,” he said. “These were under these incredibly enhanced safety precautions that these child care programs were doing.”

Some factors in child care facilities, such as fewer and younger children, may not be replicable in K-12 school settings. The pre-existing focus on health and safety training for the workforce is another difference, Gilliam said.

“They had background information and background knowledge of how to keep children safe,” Gilliam said. “They’re just uniquely able to do that because of their training in comparison to K-12 teachers. In some respects, they might be more similar to hospital workers in their training than they are to K-12.”

But other child care practices might be helpful for school leaders to consider, such as limiting mixing between small groups of children, keeping the same adults with each group, daily screenings, and extra communication with parents.

In interviews with child care providers across North Carolina, EdNC asked what advice they’d give to other education leaders bringing students back for in-person care and education. They all said there were concerns unique to child care that were part of their decisions to remain open, such as being able to survive financially.

“After 20-some years, for me it was whether I was going to have a business or not,” said Kimberly Shaw, director of A Safe Place Child Enrichment Center in Raleigh. “It was fear driven that if I closed by doors, would I be able to reopen, and did I want to end my career this way?”

Child care leaders were also clear that although they’ve been able to stay open and stay safe overall, that could change. Much of the state relief that came from federal CARES Act funding — including bonus payments for teachers, help with protective equipment and sanitization supplies, hold-harmless policies for subsidies, and operational grants — has ended, with no new federal funds in sight.

Cassandra Brooks, director of Little Believer’s Academy, which has sites in Clayton and Garner, said she did not know whether she could stay open if she had to close for another period of quarantining and testing. About 75% of the children she serves receive subsidy assistance.

“If we got another case, I don’t think I could afford to do that whole process again,” Brooks said. “… It’s not even possible, the way the subsidy funding is cut right now.”

Lynette Fraga, CEO of Child Care Aware of America, said there are lessons to be learned from the child care system, which is also in dire need of investment.

“If we don’t take care of those folks we’re learning from, we may not have a child care system in order to support parents and communities to function and to thrive, and that is really concerning,” Fraga said.

Daily questionnaires, extra sanitization, adult mask-wearing, and not allowing parents in the building have become routine in many facilities. Child care directors said these measures are important yet difficult at times.

Brooks said sometimes parents don’t have other child care options when her facility turns away a child because of mild symptoms at the beginning of the day. Sometimes there’s resistance to periods of quarantine.

Making sure adults are wearing masks and not becoming more lax during lunch breaks and in lounges has also been important.

“That was a learning curve for staff,” Shaw said.

Rhonda Rivers, director of Leaf Spring Schools, which has two sites near Charlotte, said her facilities have remained open the entire time and have not had to close for quarantining. So many months into the pandemic, she said maintaining all of these protocols can be draining. She is focused on making sure staff remains diligent.

“It’s critically important that … there are no lapses in consistency,” Rivers said.

Providers said they keep groups of children and adults from mixing as much as possible, which has helped when exposures or positive cases do come in the building.

On two occasions, Rivers said, one of her sites has had to quarantine about 10 children because of exposure or positive cases. Since that class did not come into contact with others, she did not have to close down.

“We’re very intentional in making sure our groups don’t mix so we don’t have to close down our schools,” Rivers said.

Shaw said a staff member who was responsible for screening everyone in the building contracted the virus. She said she closed the facility for 14 days even though she was told that it was not required. Interaction between staff and children has become stricter since then, she said.

“Those were learning experiences for us,” Shaw said. “How we interact with our bubbles has become a tighter process.”

June Shillito, director of Yates Baptist Child Development Center in Durham, said the tough conversations she had with her staff in March got everyone on the same page. She said she was originally in favor of closing since she didn’t want to ask teachers to put themselves and their families at risk. But her teachers said they wanted to keep working.

“Once I knew what they wanted to do, I wasn’t forcing anybody,” she said.

Seven months in, she said she and her staff members are “surprisingly fine.”

“I think it’s been the working together piece and the decision to do this together that is probably what has worked for us.”

Rivers said she closed her facility for two weeks at the beginning of the pandemic to plan a safe way to serve teachers and students. She advises school districts to ask teachers what would make them feel safe and comfortable.

“If the teachers are not OK, this is not going to work,” Rivers said. “They have to be OK.”

Providers said that they did not put restrictions on staffers traveling or socializing outside of work, but that they made sure educators and parents were committed to being responsible.

Rivers said getting buy-in from teachers from the beginning was important in building a “collective ethos.”

“What are you willing to do to help keep children safe and keep your family at home safe? So they can collectively identify what those procedures need to look like,” she said.

Extra communication with parents was also a common thread in providers’ strategies. Since many parents are used to coming into the building daily and seeing educators and classrooms face to face, it’s been important to find other ways to keep parents informed and engaged.

Shaw said her staff has one-on-one virtual meetings with parents once a week. Teachers also send pictures and videos of classroom activities “for them to feel like they’re still in touch.”

Providers said they have been intentional about checking on the mental health of staff and children throughout the year. Shaw said they have a campaign around checking in and send daily texts to staff members asking, “Are you OK?”

Rivers said she has provided resilience training to her staff members and breaks for teachers during the day. Shillito said she has made sure each of her teachers has had some time off.

Brooks said she’s also checking in on her staff and doing small things here and there, like buying lunch. But she senses her staff members are struggling mentally.

“Everybody else got to go home, sit down, and take a breather, and try to regroup, but child care didn’t really get a breather to regroup,” Brooks said. “So I can tell some of my staff is tired. … I’m tired too.”

Earlier this year, she said the stress got so bad she couldn’t move her neck.

“I thought this was going to be fast and like a sprint, but unfortunately this is a journey,” Brooks said. “So we’ll probably be doing this in six months, a year from now. Just try to take care of yourself so you can be strong for others.”