Recruitment and Retention in the Early Childhood Field 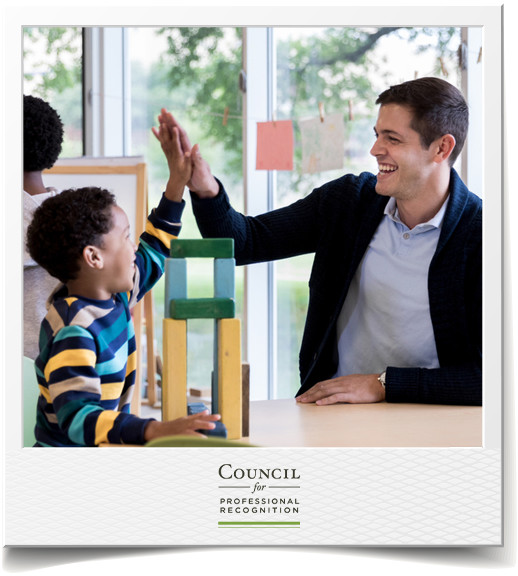 The early childhood care and education field tends to be no man's land. Nationwide, a meager 2.2 percent of ECE and kindergarten teachers are men, and 44 percent of them leave the field within five years.[1] Roadblocks to men teaching young children include rigid ideas about gender roles, perceptions of ECE as a low-prestige job, lack of benefits and a living wage, the suspicions of families and colleagues who question why men would want to teach young children. In addition, the glass escalator tends to put men on the fast track to advancement when they enter mainly female fields. As a result, men in ECE often wind up in administration, though they leave their hearts in the classroom and stay teachers at their core.[2]

The pressures that push men out of ECE also include a feeling of isolation. Just ask Chad Nunamaker, an early childhood teacher and college instructor in Ohio. "When I look back on my own career," he says, "I realize that it's been rare for me to work with other men because there are so few of them in the field."[3] One of those rare men is Dr. Calvin E. Moore, Jr., CEO of the Council for Professional Recognition. He's also a former teacher who's studied why some men stay in ECE despite the forces that push most of them out.[4] "When I started working at a Head Start center, I was the only man and parents were looking at me sideways," he recalls. "It led me to feel alone and unwelcome."

But we should welcome men into the ECE field, so our youngest learners can interact with a gender-balanced workforce. There's wide recognition that male teachers serve as role models for boys, often relate to them more closely than women do and are more at ease joining in the roughhouse play many boys enjoy. Less discussed but also important is the impact they make on girls. For young girls, a male teacher offers an early opportunity to build relationships with men outside the family. This greater understanding of men helps girls later make successful transitions into the wider world of college, work and adult relations.[5]

Recruiting and retaining more men allows students to have a wider range of cognitive, cultural and social experiences that leads to better outcomes, says Kirsten Cole, a researcher at Borough of Manhattan Community College. "As young children come into their identities, it's important for them to be in settings where they see that men and women have an important role to play in nurturing and educating young children. This modeling ultimately helps the child have a better understanding of their own identity."[6]

Many young men are also seeking their own sense of identity during the high school years. They're searching for a path in life and exploring their options. So, it's a good time to introduce them to ECE. Administrators and teachers in career and technical education (CTE) programs can encourage them by talking about men in positive ways and putting up displays that depict men in caring roles. They should make young men aware that teaching can be a gateway to careers in advocacy and policy with the potential to help children nationwide. They should also examine their own gender biases, try to use gender-neutral language in their interactions with students and provide more chances for young men to learn what it's like to be a preschool teacher.[7]

We should make ECE more appealing to men, as Paige Hassel is doing in Memphis, TN, where she's the CTE department chair and ECE teacher at Bolton High School. "I hate the stereotype that men who want to work with young children are weird," she says, "so I try to attract both males and females to my program. I stand in the hall and interact with students between classes, so they get to know me and my program. I bring toddlers from our on-site preschool to different classes and show students what we're doing. We plant things in our school garden with the agricultural science students, sing Christmas carols and go trick or treating around the school. When it's time for our preschool graduation, the kids put on little caps and gowns and parade throughout the classrooms."

Hassel's determined campaign—and her adorable toddlers—sound hard to resist, and she has enlisted about a dozen male students in her program. "The children seem to gravitate towards these young men," she says, "and they're wonderful with the kids." They also have the skills to work effectively with young learners because Hassel's program gives students the chance to earn their Child Development Associate® (CDA) credential, based on 120 hours of coursework and 480 hours of experience with children.[8] The CDA provides rising teachers with practical skills, so they're well prepared on day one in the classroom. That makes it an ideal way to inoculate young men from the factors that prevent them from persisting in the ECE field.

"I think the CDA was important for me," Moore says, "because it created this bubble of competence around me that made me feel I belonged in an early childhood setting. If a parent or teacher questioned whether I belonged, I could insist I did because I had the right skills," he recalls. Based on his own experience, Moore is leading the Council in publishing the CDA® Handbook for High School: A Guide to Advocacy and Implementation. It provides administrators and teachers with a detailed plan for launching or sustaining a CDA program in their district or school.

The high school CDA is a great way to bring more young men into the early childhood field because men tend to like action-based learning. "The CDA is very hands on," says Bryan Nelson, director of MenTeach, a nonprofit devoted to boosting the number of men in education. He earned the credential before going on to college and grad school, so he shows how the CDA promotes continued professional growth. "It appeals to many men by providing a clean step-by-step process for getting the skills they need, and that makes it an incredible career ladder."[9]

In addition, earning a CDA is so much less expensive than getting a college degree. "It's almost impossible to pay back college loans," according to Patrick Frueh, a technical assistance specialist at Action for Children in Columbus, OH, and a professional development specialist who assesses CDA candidates for the Council. "The CDA, on the other hand, offers a cost-effective way to get the skills you need," Frueh says, "and the greater return on investment might encourage more men to get into the field."[10]

When recruiting male teachers, ECE programs should think in terms of critical mass. Recruiting one man can be an achievement, but a single man is likely to feel quite isolated. Recruiting two or three men may reduce the isolation, but these few men may still seem like unicorns in the feminized ECE field.[11] To achieve gender balance, we need more male-centered settings like one where Moore once worked. "It was run by a man," he recalls, "and they had a male center director and a male teacher or assistant teacher in every room. I think they also had a male bus driver and male family advocate. So, they had reached critical mass."

As we draw more men to the field, we should also work to ensure they can grow in their profession. Earning a CDA is a steppingstone to advancement, according to Jarrell Harris, a young teacher in Steger, IL. He earned his CDA, and having the credential enhanced his career. "When I began working at a day care," he says, "I was in a room where they had all the three- to five-year-old children grouped together. On my recommendation, they made a separate room for the five-year-old kids, where I could address their needs even better. By 2017, I had become a lead teacher and earned my associate degree in education."[12]

Harris now has his own preschool program, Empowering Young Lives, and we need more success stories like his. Men who lead centers can play a key role in building the critical mass needed to reach gender balance. But maintaining it can be an issue if ECE administrators don't also have the will to meet men's needs or take advantage of ways to help men grow in their profession: providing mentoring, setting up support groups and choosing curricula that are inclusive of men.

Still, these measures will only go so far without public funding to provide ECE teachers with benefits and pay on par with primary and secondary school teachers. Most ECE teachers don't get health insurance, they tend to earn a median hourly wage of $10.31—and many can't survive without public assistance.[13] These low wages are, of course, disturbing for all ECE teachers. But they're more daunting for men, who are still the primary earners in two-thirds of U.S. families.[14]

The downsides of the early childhood profession may not deter men who are committed to teaching young children. And they could serve as forceful advocates for the field. "Men don't mind asking for what they need," Moore says based on his years as a center director, and they will join their voices with those of the many women who now demand change. So, increasing the number of men may help lead to long-term improvements in the ECE workplace.

We can widen the pipeline for men in ECE by reaching them early in our nation's high school programs. ECE instructors should encourage young men to attend their programs, like Paige Hassel does at Bolton High. Male teachers should take deliberate steps to serve as role models and mentors for their male students. Guidance counselors should provide them with information on the ECE field since young men may not consider teaching young children as a career unless it's pointed out to them. Recruitment materials should depict men as teachers and address their questions and concerns.[15]

The efforts we make to meet men's needs will also enhance the entire ECE field. Having diverse role models of both genders is vital for our youngest children. And both men and women would be better off if the field provided fair benefits and pay. With the right strategies and steps, we can recruit more men into the field. A good place to start is in our high schools with young men who are still looking for their path in life. Recruiting and retaining them will take work and require investment, but it holds the promise of rewards. So, we must man up to enlist more men in ECE—and ensure they do stay.