As workplaces reopen, Maine parents scramble for child care made scarce by pandemic 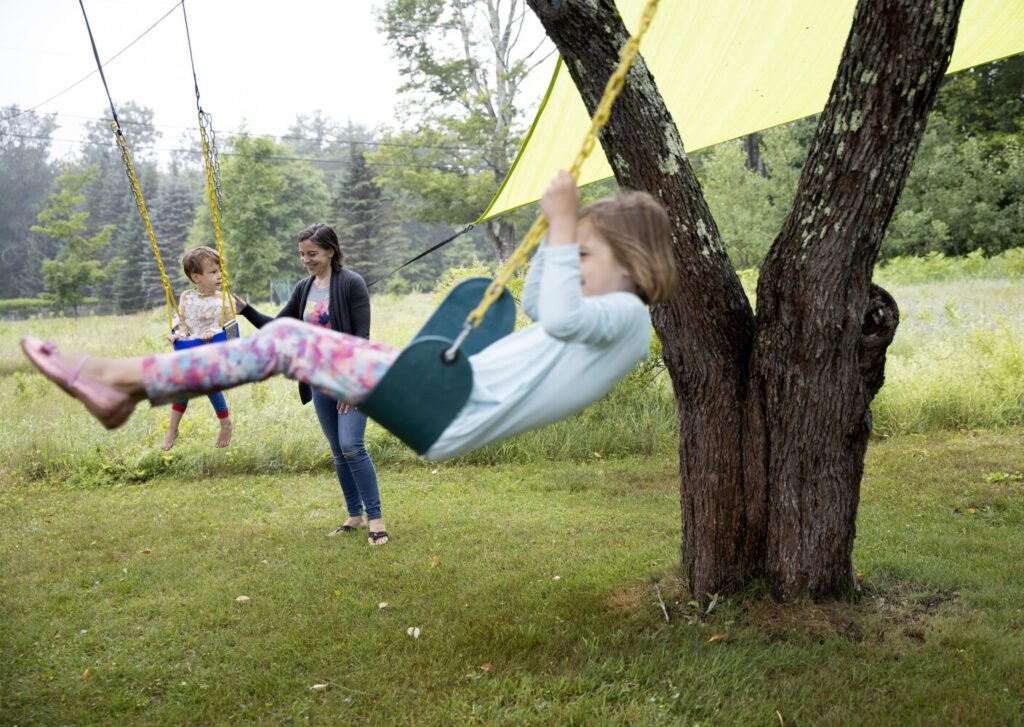 When the child care center for her 3-year-old son closed permanently in June as part of the fallout from COVID-19, Emily Bogner said she was “heartbroken.” But her family had to quickly spring into action.

Bogner, of North Yarmouth, is a teacher at Greely Middle School, and her husband, Jon Williams, is a carpenter, so they need full-time child care by this fall.

“We were scrambling to find a place, just like everyone was scrambling. It was very stressful,” Bogner said. “I called 10 places, and almost no one got back to me. One place that did said they were getting a flood of inquiries about openings.”

Bogner said the couple finally found a child care that has one full-time slot open, Winfield Children’s House in Falmouth, and they will likely choose it.

The family’s experience is far from unusual, as COVID-19 has upended an industry that runs on thin margins and was already struggling with capacity and workforce retention problems.

Child care facilities were designated as essential businesses, authorized to stay open under an executive order that Gov. Janet Mills issued on March 18 in response to the novel coronavirus pandemic. But many facilities closed anyway, as tens of thousands of Mainers were laid off, given reduced hours or told to work from home. By April, half of the state’s 2,100 licensed child care homes or centers had shut down, according to the Maine Department of Health and Human Services.

Three months later, more and more people are being summoned back to their workplaces. Yet about 20 percent of child care operations are still shuttered. That’s fueling a demand for child care slots that have traditionally been in short supply in Maine and across the country, for a number of reasons.

Maine has the capacity for 49,651 infants, toddlers and pre-schoolers in its licensed child care system, but there was a demand for 52,535 placements just before the pandemic, according to a study by the Bipartisan Policy Center, a Washington group that advocates for bipartisan solutions to a range of social problems.

Rita Furlow, public policy analyst for the Maine Children’s Alliance, a nonprofit advocacy group, said the gap between supply and demand is likely wider, especially for infants, because many day cares are licensed for more children than they can actually accept.

And the supply/demand gap is likely larger for those needing care for infants, Furlow said. She said child care as a business model already runs on thin margins, and now their owners have lost out on months of revenue. Efforts to shore up child care services with federal CARES Act funding and other help from the Mills administration is not enough, Furlow said. Even if 10-15 percent of Maine’s 2,100 child cares permanently close, she said, that could put a huge crimp on supply when people need child care to return to work.

“I’m so concerned about the fragility of this field,” Furlow said. “If there are not significant government efforts, we are just going to see a lot of them close up. I don’t know what we are going to do when people need to go back to work.”

Todd Landry, director of the Office of Child and Family Services at Maine DHHS, said the agency recognizes that demand outstrips supply, especially for infant care, and initiatives being launched in July, including a $100 per week, per child stipend for infant care, should help alleviate some financial problems.

Child care providers often lose money caring for infants, which is more labor-intensive, and try to make up the difference and turn a small profit with older children. But that means providers will limit the number of infant slots to make the numbers work.

“Since May we have seen a gradual reopening, to 80 percent of all of our providers,” Landry said. “We think a significant number will reopen this summer. But we recognize and understand that if you’re one of the families in the 20 percent of providers still closed, that’s still a big challenge for you.”

Landry said another initiative that begins this summer will give child care owners extra funding if they maintain quality operations standards set by the state.

Tender Years Learning Center in North Yarmouth, which Emily Bogner’s son, Forest, attended, closed permanently, a gut-wrenching but necessary decision, said its owner, Karen Bruder. She said she’s sad about closing, but she felt like reopening was a worse choice.

“I was barely above break-even before this,” Bruder said. She said she struggled with what to do with the child care center, which was for ages 3-5 with a capacity of 28 children.

She said she had to worry about complying with Maine CDC guidelines, including fewer children per classroom, which would limit her revenue. Bruder said one of her choices would be to hire someone to do extra cleaning or have her teachers – she hires only educators with at least a bachelor’s degrees – do the cleaning. Wages in the industry are low – only slightly above minimum wage – and the job becomes less attractive when it contains more busywork, she said.

“We would have teachers becoming janitors and not teachers at all,” Bruder said. “How is that teacher supposed to teach but then clean the bathroom every single time a child uses it, sanitize and disinfect frequently, and run around every hour disinfecting high-touch services? How are they supposed to have the time to do all that and teach?”

She would have had to follow other guidelines as well, such as frequent temperature checks, and a “quarantine area” for children who become sick at the school. Bruder said even though the guidelines are not requirements, she believes in essence they are, because if she didn’t follow all of them, and a child fell ill with COVID-19, then she would be held liable.

Bruder said her profit margins were typically less than 5 percent, and she wasn’t able to make the numbers work without compromising the quality of the program.

“Maybe I wouldn’t be a pre-school anymore, but a holding place for children while parents go back to work,” Bruder said.

Sasha Shunk, owner of Shunk Child Care in Portland, said she reopened, but the decision to do so was not easy. The CARES Act funding for her was a one-time check of $900, which paid one bill.

Landry said the Mills administration realizes the CARES Act funding was not enough and is hoping that bills pending in Congress will provide more financial help for child care providers.

Meanwhile, Shunk said there’s a lot of uncertainty among owners of the facilities.

“Early childhood education is, in general, very underfunded,” Shunk said. “But if we don’t open, where would people go when they need child care?”

Shunk said because she has a large outdoor learning center, and it’s summertime, she is able to have the children spend much time outdoors. Outdoors is generally considered safer than indoors for COVID-19 transmission, according to health experts. She has made other alterations to how she runs the family care, which typically has 12 children, although right now she has six to eight children per day. For instance, when children nap, they are 6 feet apart, and when parents pick up their children, they do so outside and don’t step into the house unless necessary.

Abbie Bragg of Portland, whose daughter Mabel attends Shunk Child Care, had a full-time office job, but after the pandemic struck her work was moved to being at-home.

She said the stress of working full time and caring for a 4-year-old while her husband, Matt, worked outside the home became untenable. So he switched to part-time work for about a month and cared for their daughter. The couple were able to secure paid leave for Matt under the federal Families First Coronavirus Response Act, but they were still losing too much income, she said.

Bragg said they were lucky, but it was still a struggle.

Other families said they have experienced similar problems.

Danna Hayes of Portland said she and her husband are burning through their savings account, paying about $3,200 monthly for an in-home nanny for her two boys, Eli, 4, and Noah, 5 months. Hayes said she was too worried about COVID-19 to send her children back to child care, even though hiring a nanny stretches their budget to the limit. The couple went without child care and cared for their children while working from home full time for about two months.

“We would whip out our computers after dinner and work well into the evening,” Hayes said. “It felt like we were doggy-paddling and just barely keeping our noses above the water.”

She said their older son will enter kindergarten in 2021, and hopefully by then they will feel comfortable sending Noah to a child care center.

Posie Wood of Portland, who is expecting a son in late July and has a 4-year-old daughter, said her family has been lucky to have two full-time wage earners with flexible and understanding employers. They didn’t send their 4-year-old back to child care this summer in part because of Wood’s pregnancy. Women who are pregnant may be at risk for more severe cases of COVID-19, according to the U.S. Centers for Disease Control and Prevention.

“We are so much better off than a lot of families, but it’s still been really hard,” Wood said. “There’s so much uncertainty, this doesn’t seem like it’s going to end, and there’s no good answers.”

Wood said they don’t know what they are going to do after she has the baby and their family leave runs out, in mid-to-late October. But she said they don’t have to decide right now.

Furlow, the Maine Children’s Alliance analyst, said the entire system is under stress, from parents who don’t know if their child care will reopen, to child care owners working the numbers to see if it makes sense to reopen.

“These are people already on the edge, barely getting by and now we are increasing their costs,” Furlow said. “We’ve talked to lots of people who run child cares and they have said they just don’t know if they are going to make it.”