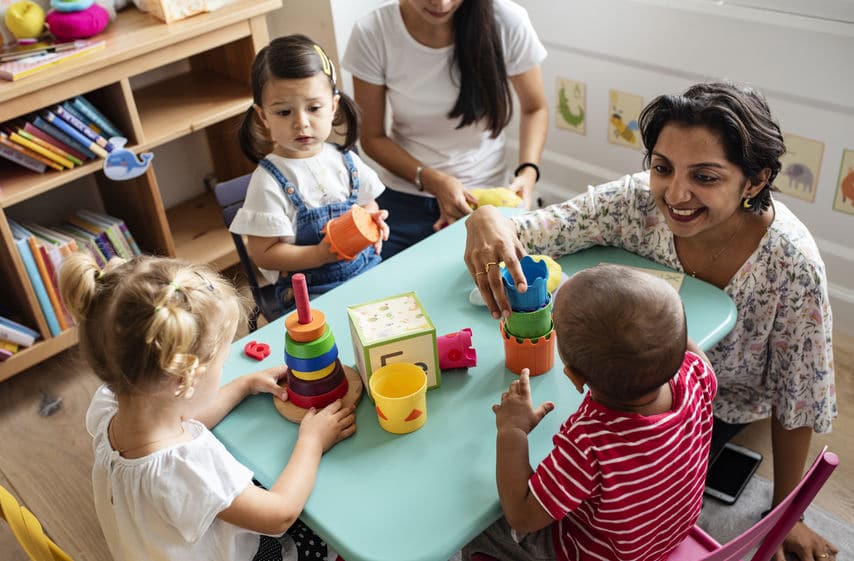 A long-anticipated “master plan” for overhauling California’s child care and preschool system has just been released, drawing mixed reactions marked by sharp criticism for being out of touch with the needs of an industry particularly decimated by the coronavirus pandemic.

“The child care system, which is critical to the state’s recovery in 2021 and our collective future, was already in crisis, and has been pushed to the brink by the COVID-19 pandemic,” Ted Lempert, president of the advocacy group Children Now, said in a statement following the report’s release last week.

Developed by a coalition of researchers led by the San Francisco-based nonprofit WestEd, the statewide plan proposes major changes to state services for young children and their families, including universal preschool for 4-year-olds and many 3-year-olds and expanding paid family leave. To improve the quality of state-subsidized care, it also calls for lowering staff-to-child ratios, offering higher payments to child care providers and giving child care workers and preschool teachers incentives to engage in specialized training.

Gov. Gavin Newsom (D), who campaigned on promises to deliver many of these things, commissioned the plan for $5 million to serve as a blueprint for his vision. To that end, a week after its release, a group of state lawmakers released a package of bills closely mirroring many of the report’s key goals.

But many in the field are calling the plan unrealistic given present conditions. The recommendations would cost between $2 billion and $12 billion annually, a price tag that to some observers seems unrealistic considering the crippling damage COVID-19 continues to inflict on government budgets. The authors hope the Biden administration will make bigger investments in early childhood education, defraying costs for the state and families.

Then there’s the current state of the child care industry. Long before the coronavirus all but shut down the country this spring, two-thirds of families eligible for publicly funded care weren’t able to access it, either because they couldn’t find a licensed child care center nearby or those around them had waiting lists.

Under the crush of COVID-19, nearly 400 licensed child care centers in the state have closed, along with at least 2,000 family child care homes, according to the state. The long-term strategies put forth by the statewide master plan don’t face the urgent needs of the flailing industry now, according to some providers.

“Who knows how the sector will look when it’s time to start implementing this plan? We need to address this crisis because if not, there won’t be any child-care providers left,” Max Arias, chairman of the Child Care Providers Union, told the Los Angeles Times.

In defense of the costly plan, the authors of this month’s report argue that upfront spending to bolster early childhood education will result in long-term decreased costs for safety net programs like social welfare and public health and will fuel the economy by allowing parents to remain employed.

“Continuity of care will facilitate upward mobility for two generations,” the authors wrote. In the short-term, it would offer stability to working parents, making it easier for them to grow in their careers.

A number of child advocates and providers praised the report for its focus on increasing access to quality day care and preschool programs — specifically, low-income families, those growing up in dual-language households and families experiencing homelessness or child welfare involvement.

“Governor Newsom has delivered a historic plan for erasing the inequities that face so many young children from the day they are born,” Scott Moore, CEO of the early education provider Kidango, said in a statement.

Two years of high-quality preschool minimizes the chances that a child will be referred for special education in the future or be held back to repeat a grade, according to research cited by the authors.

But Sid Gardner, president of the national nonprofit Children and Family Futures, said in an interview with The Imprint, too often the “most/least syndrome” prevails: kids who most need the benefits offered by high-quality early education are the least likely to receive it. Common barriers to enrollment and retention include cost, transportation, work schedule and housing instability.

Gardner said one of his key critiques of the master plan is that it assumes early childhood education can address the many and varied needs of at-risk children and their families. A recent report from his organization found that parents’ struggles often impede their children’s enrollment and attendance, but those aren’t the sort of challenges that preschools and day care can solve.

“Child caring agencies can’t do this job by themselves,” he said; they need to work more closely with local governments and community-based organizations who can get parents the support they need.

The plan calls for the California Department of Social Services to take over the administration of much of the child care and early childhood education system — with the notable exception of Head Start, which will remain under the purview of the Department of Education. This, along with a data-sharing provision, is supposed to help streamline eligibility and enrollment with other social services so families can more easily access and apply for safety net programs.

A new set of licensing standards for child care facilities that include trauma-informed training would also be created, along with prohibitions on suspending or expelling childrenfrom preschool, which predominantly impact children of color and low-income kids.

The plan would also institute a universal sliding scale for fee payments and assistance for a short-term transition period when families’ income eligibility changes. For families who access child care through the foster care system, cutting off assistance when their cases are closed could create a dangerous strain on vulnerable households, authors wrote.

To pay for the broadened access, the authors of the early childhood report presume there will be new funding streams created under the incoming Biden administration. During his campaign this summer, the president-elect released a $775 billion plan to provide universal preschool, expand the nation’s child care infrastructure and increase wages.

Newsom has repeatedly vowed to better serve the state’s youngest residents. In 2019, shortly after taking office, he appointed the state’s first surgeon general, a high-profile pediatrician who specializes in early childhood trauma. He sought to create a Department of Early Childhood Education, though the pandemic postponed that plan.

“Every child in California deserves a shot at opportunity,” Newsom is quoted in a press statement. “By investing in the development and learning needs of our kids, with a focus on equity, we are investing in the future of our state.”

Note: One of the groups involved with this study, First 5, is a funder of The Imprint’s publisher, Fostering Media Connections.