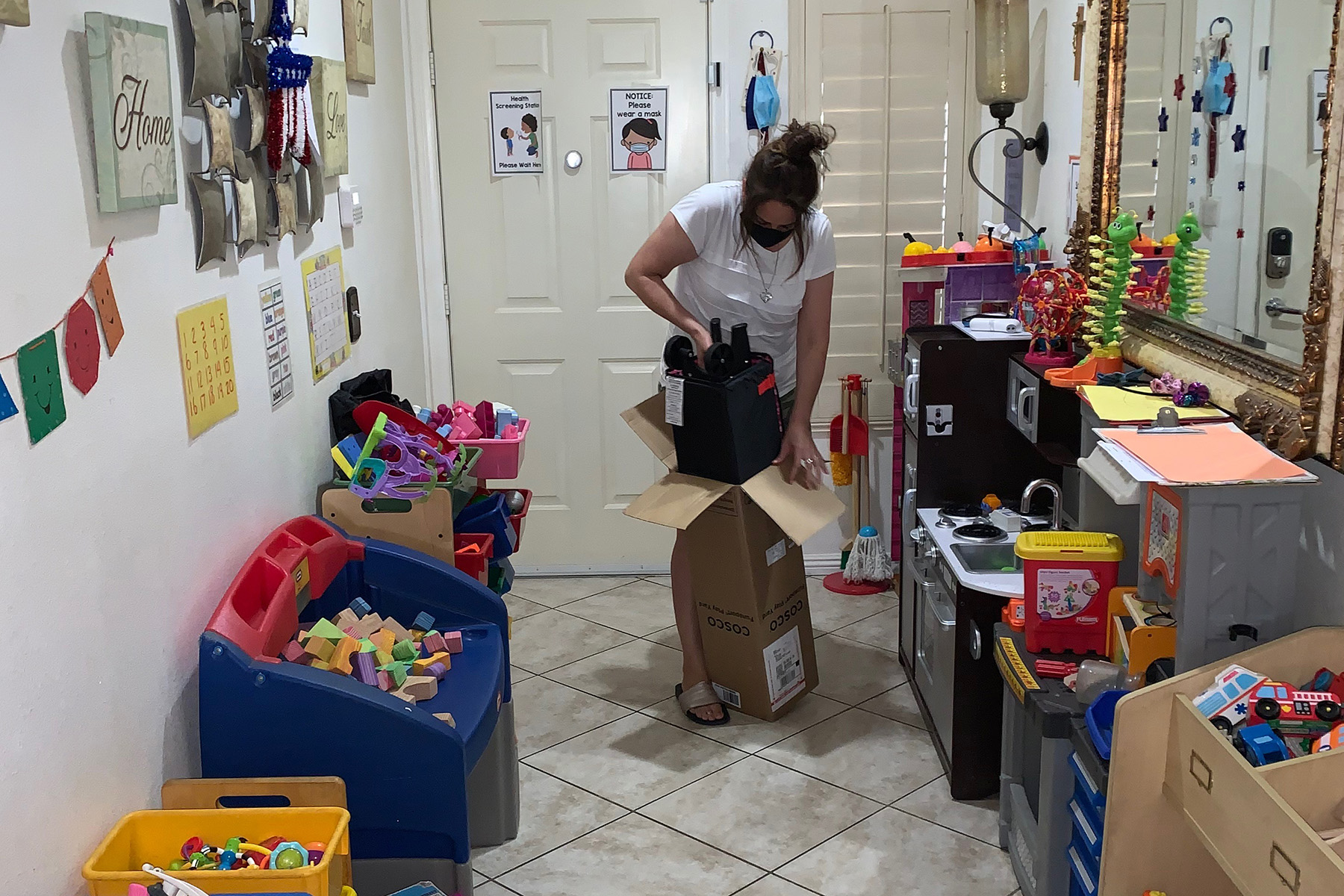 The coronavirus pandemic is pushing many California child care providers to the brink of closure and forcing them to risk both their own health and their finances.

With less income and more expenses, many providers are missing rent and mortgage payments and racking up credit card debt, even as they worry they will be infected with the coronavirus, according to a new survey from the Center for the Study of Child Care Employment at UC Berkeley. The center surveyed 953 California child care programs, including both private centers and programs run out of providers’ homes and found challenges at both.

“Folks are covering the gap with their own money or taking on their own risks. This is especially true for family child care programs,” said Sean Doocy, research associate at the center and one of the authors of the report, referring to the kind of child care programs that are operated out of providers’ homes. “It’s nearly entirely women and largely women of color in California who are financing this and keeping this industry afloat.”

Then, in July, Lopez said a mother was sick for a week but continued sending her 5-year-old son to her child care home before both mother and son tested positive.

Lopez, her husband and her three children, ages 15 to 23, eventually all got Covid-19.

“It was excruciating. My body was in shock, shaking because of the pain,” Lopez said.

Lopez has not cared for any children since she first started having symptoms on July 10. She said no other children in her care tested positive.

If she could afford to stay closed, Lopez said she would, both to protect herself and her family, and to protect the children she cares for and their families from Covid-19. But she said that would be financially impossible.

“It’s our only income. It’s how we put bread on the table,” Lopez said.

The UC Berkeley researchers found that the family child care homes and child care centers that had closed did so because they were worried about the health risks.

Those that stayed open did so because they could not financially survive a closure, yet more than one-third of providers who have open programs are worried that they, their families or the children they serve will get sick. Almost two-thirds of child care centers that are open have teachers who are not working because they are worried about the health risks.

“That really spoke to the fact that folks are in this horrible bind, trying to decide between their own health and the finances,” Doocy said.

The Center for the Study of Child Care Employment is advocating for more state and federal funding for child care providers to allow them to stay open and operate more safely. More funding would also allow providers who are older or have underlying health conditions to close their programs until they feel it is safe to reopen.

Child care programs across California have fewer children attending, partly because of health and safety guidelines that limit the number of children in any child care classroom, and partly because many families have kept their children home because they are worried about catching the virus. Fewer children means less income. In addition, providers have additional expenses because they need to purchase cleaning supplies and protective equipment, such as gloves, masks and alcohol to disinfect toys. And any time a preschool teacher or assistant has a runny nose, a sore throat or any other symptom that could possibly indicate Covid-19, they have to stay home and get tested to rule out the virus, which means programs have to find and pay for substitutes.

Before the pandemic, Ana Andrade had 15 children attending The Wolf Pack Child Care, which she runs out of her home in San Rafael, in Marin County. Some children attended only part of the week, while others attended full-time. Now, she has only nine children.

Andrade said the smaller number of children has translated into a loss of about $5,000 in monthly income while her expenses have gone up. She spent more than $5,000 on building long tables for the children to sit far apart, a portable sink and a roofed area, so she can hold most of her program outdoors, since there is less risk of the virus spreading outside. She’s also spending a lot more than usual every month on cleaning supplies, masks and gloves.

Andrade was able to secure a Paycheck Protection Program loan from the federal government to help pay for her two assistants for two months, but she is worried she may have to lay them off in the future, if a surge in cases causes the county public health department to close programs again.

Andrade worries a lot about whether opening her child care program has put her at higher risk of getting the coronavirus or of spreading it among the children in the program, but she said she could not afford to close for more than three weeks.

“I could no longer risk being closed. If I did, I would have lost all my families. They rely on me,” Andrade said.

Nancy Harvey, who runs Li’l Nancy’s Primary Schoolhouse out of her home in Oakland, now has seven children in her program — half the number as before.

Harvey said she is grateful to the organization Child Care Providers United for advocating for the state to provide gloves, masks and cleaning supplies to child care providers, though she said there still aren’t enough. The organization became a union with a historic vote announced Monday and will represent family child care providers who receive subsidies from the state to care for low-income children.

She hopes the union will advocate for health insurance, in addition to higher payments for providers to care for subsidized children.

“Every day we open the door, it’s like Russian roulette, right?” Harvey said. “Our children are too young to keep on masks. They’re young. They climb all over you. They want their hugs during circle time and story time. Part of our job is teaching them socialization. How do you do that with 18-month-olds, 2-year-olds, 3-year-olds, when they’re trying to touch you, and you’re pushing them back? So yes, we’re at risk — all of us.”

Child care programs run in centers instead of homes have run into obstacles, too, such as finding and paying for substitute preschool teachers, which was already difficult in the early education field before the pandemic.

Lighthouse for Children, a child care center for infants, toddlers and preschoolers in Fresno, closed in March due to the pandemic. Two teachers had flu symptoms before the center reopened in early July, according to director Lupe Jaime. They ended up testing negative for Covid-19, but the center had to operate with fewer staff until the teachers got their test results back.

“As we’re seeing cases increase, we’re realizing that there will be a risk where a teacher may have to be out for quarantine, and we may have to bring in someone who is getting to know the infants for the very first time,” Jaime said. “We’re having to think through a plan A, B and C.”